An apprentice ceremony is performed when a kit is ready to take on apprentice training, usually at the age of six moons old.

When a kit turns six moons old, they are ready to become an apprentice.[1] Until this time, their name ends with the "-kit" suffix. When a kit becomes an apprentice, their name is changed so that the suffix of their name becomes "-paw", showing the path that their paws are now on.[2]

The Clan leader calls a Clan meeting to appoint a new apprentice and assign a mentor to them.[2] The following words are used, by tradition:

Leader: (Kit), you have reached the age of six moons, and it is time for you to be apprenticed. From this day on, until you receive your warrior name, you will be known as (new name, ending with the suffix "paw"). Your mentor will be (name of warrior or medicine cat). I hope (name of warrior or medicine cat) will pass down all he/she knows on to you.[3]

The leader calls up the warrior he/she has chosen as a mentor.[3]

Leader: (Warrior), you are ready to take on an apprentice. You have received excellent training from (former mentor), and you have shown yourself to be (quality) and (quality). You will be the mentor of (apprentice), and I expect you to pass on all you know to (apprentice).[3]

The mentor touches noses with the apprentice,[3] and the Clan greets the new apprentice by calling out their name.[4] After this, the apprentice will usually go greet their family,[4] or go see their mentor.[5]

The leader calls a Clan meeting, after the Clan's medicine cat announces that they wish to mentor an apprentice.[6] After their ceremony, the mentor touches noses with the apprentice, and the Clan greets the new apprentice.[7]

At the next half moon, the medicine cat goes with the apprentice to the Clans' sacred place to present them to the warrior ancestors, where the apprentice confirms their wish to be a medicine cat.[8] The following words are used, by tradition:[9] 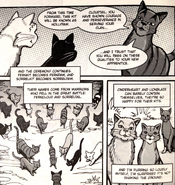