View source
watch 02:07
Spider-Man: No Way Home Trailer Dropped - The Loop
Do you like this video?
Play Sound

As ShadowClan recovers from the betrayal they had faced, Blackfoot is now to be the leader. Will StarClan forgive him, and grant him a leader's nine lives?

Return to the Clans, A Shadow in RiverClan

Blackfoot's Reckoning is the twenty-first novella attributed by HarperCollins.[4]

One ShadowClan leader's path to redemption.

After Scourge is found dead, and the battle against BloodClan ends, ShadowClan is recovering from the damages of many previous battles. Blackfoot greets Firestar in congratulation, but Firestar responds harshly, asking whether he should be leader or not, and reminds the deputy of how he killed Stonefur. Blackfoot is very worried, and he thinks about his past actions. The next morning, Runningnose asks several questions, once again questioning whether Blackfoot should be leader or not. After Blackfoot finally decides to go to Highstones, he tells Russetfur about watching over the Clan while he's gone, making Russetfur the deputy.

When Blackfoot finally arrives at Mothermouth and connects with StarClan, the first cat he sees is Sagewhisker. Sagewhisker knows that Blackfoot is uncertain about becoming Clan leader, and once again questions Blackfoot about his choice. Blackfoot insists that he is loyal to his Clan, and someone from StarClan hisses in objection about this statement. Sagewhisker then tells Blackfoot he has an even larger burden to help ShadowClan recover from everything that’s happened, and tells Blackfoot that he can stop the process of receiving his nine lives at any time during the process. However, even with this burden, Blackfoot still decides to start his leader ceremony. The first cats that approach Blackfoot are his mother Hollyflower and Blizzardwing. Blackfoot is then led into a dream about his past.

Blackpaw is in the medicine cat den, as he ate a rotting frog days prior. Blackpaw hears Blizzardwing saying he wants to visit his kits, but Hollyflower tells him that he shouldn't have visted. Through this, it’s revealed to Blackpaw that his father is Blizzardwing. A couple days later, during an apprentice game, Clawpaw mocks Fernpaw, Flintpaw, and Blackpaw for only being able to be half-warriors as he believes them to be half-Clan. Fernpaw and Flintpaw insist they aren’t. Blackpaw wants to reveal his father, but he declines to do so. Angry, Blackpaw heads to talk with Brokenkit. Brokenkit then tells Blackpaw that other cats' opinions weren't important. Blackpaw is empathetic for Brokenkit, as they both only have one parent. Blackpaw reveals to Brokenkit that he knew who his father is, and Brokenkit is surprised by this. Brokenkit wishes for him to become an warrior even greater than his father, and teach his father a lesson. Blackpaw starts to feel that his father wasn't that important.

As the dream ends, Blackfoot reveals that he’d known about his father early on, and his parents are both sad that they hurt his feelings. Blizzardwing asks Blackfoot if he accepts this life, and Blackfoot takes it. Blackfoot notes that he isn’t the only Clan leader with weird parentage. Blizzardwing gives Blackfoot the life of acceptance, to accept one’s past, reflecting on Blackfoot's dream. Blackfoot's parents leave with a affectionate glance.

Raggedstar slowly approaches Blackfoot to give his next life. In the vision of the past, Blackfoot is entering the camp to hear Ashheart threatening Brokenpaw because Deerpaw got injured. The she-cat attempts to hurt Brokenpaw, but Blackfoot intervenes and reminds the warrior of the warrior code. Brokenpaw calls Ashheart a coward before leaving. Ashheart claims that she was never going to hurt the apprentice, and he responds that apprentices are always getting into trouble, so they can't take it too seriously. The she-cat goes to tell Nightpelt of what happened. He approaches Brokenpaw, who states that Clanmates were useless if they couldn't serve the Clan. Blackfoot disagrees, and tells Brokenpaw that he would understand when he was older.

Raggedpelt walks up to him, and thanks Blackfoot for standing up for Brokenpaw. The deputy tells him that they both knew how hard it was to grow up with only one parent, and Blackfoot states that he would look out for Brokenpaw in the future. Back in the present, Raggedstar meows that he could imagine what Blackfoot had seen, giving the tom a life for trust, and the former leader walks away, saying that Brokentail had killed him in the end. Badgerfang appears, and the past takes shape around him.

Brokenstar calls for a Clan meeting and as they gather, Brokenstar starts off by saying that ShadowClan was feared, and strong. He signals Badgerkit to come forward, and apprentices him to Flintfang with the new name of Badgerpaw. After the meeting ends, Fernshade expresses her concerns for Badgerpaw. He and Flintfang manage to convince her that it was alright. Later on, they are in a battle with a WindClan patrol. The WindClan cats retreat, and Blackfoot looks around to spot Flintfang hunched over Badgerpaw. As he steps closer, he sees Badgerpaw requesting to be named after his mentor and names himself Badgerfang. The kit falls limp, and he wonders whether following Brokenstar was really right.

As he returns, Blackfoot asks the cats of StarClan if he should've opposed Brokenstar, saying that following their leader made them Clans. The sympathetic kit gives Blackfoot a life for perspective, before stepping back. Gray Wing comes forward, eyes warm, and Blackfoot feels as if Gray Wing truly believed in him, the thought being his last as the another memory starts to replay. Brokenstar and Blackfoot are meeting with Tallstar and Deadfoot, with the plan to get ahold of WindClan territory. Tallstar shows no sign of fear, and Brokenstar tells them that ShadowClan wanted hunting rights on WindClan territory, but the two refuse and depart. They tail the WindClan cats and arrive at the raided camp. Brokenstar attacks Tallstar, and warns him that if WindClan didn't leave, they would die, and the battle ends.

Back to the present, Blackfoot insists that they needed the territory, feeling immense guilt. The golden-eyed tom gives him a life for unity, and the next cat up is Rosetail. He looks away from her cold face, and he closes his eyes. Blackfoot is double-checking with his patrol that they knew what to do, and reviews the plan. They discuss that they couldn't believe Yellowfang's treachery. They attack, and Lionheart yowls to defend the camp. The ShadowClan warriors spread out, drawing them away from Blackfoot who quickly enters the nursery. He takes one kit, and is reaching for another when Rosetail attacks him, and Blackfoot kills her. He continues to carry out the plan but is surprised when he is interrupted by Yellowfang, and Blackfoot quickly retreats.

Shamefully, Blackfoot realizes that Yellowfang never murdered Brightflower's kits, and Rosetail flatly meows she gave him a life for compassion before drawing back. Bluestar greets him calmly as she comes forward, no judgement in her blue gaze. Blackfoot remembers that they both had chosen to trust Tigerstar, two choices that ended up in wrecking the Clans.

Blackfoot growls that they'd been close to rescuing Brokenstar from ThunderClan. They'd take back Brokenstar, who surely hadn't killed Raggedstar, and everything would be back to normal. Tangleburr meows that if RiverClan hadn't intervened, they would've won. They wonder if Tigerclaw had killed Bluestar, they would've gotten Brokenstar back. He spots Tigerclaw, battered and he points out his stomach wound. Tigerclaw dismisses it, and they agree that Fireheart, the kittypet, had no business in pretending to be a Clan cat. Tigerclaw tells him that Brokenstar is dead, but had a plan, and overwhelmed with gratitude, he promises to not let Tigerclaw down.

Bluestar gives him a life for judgement, and Stonefur reluctantly pads towards him. Blackfoot noting he looked better, and the past takes shape around him. TigerClan gathers, to hear Tigerstar's speech. The tom yowls that it was time to get rid of half-Clan cats. Stonefur, Featherpaw, and Stormpaw stand in the middle of the clearing. Blackfoot yowls the word filth, chanting as Stonefur protectively stands over the two apprentices. Suddenly, Blackfoot feels unease as he remembers how he'd respected Stonefur as a good warrior. Tigerstar orders Stonefur to kill the apprentices. Stonefur asks Leopardstar, who agrees. Darkstripe attacks the former deputy, but Stonefur takes the upperhand. With Tigerclaw's orders, Blackfoot leaps in and prepares to give the death blow.

Blackfoot shudders, not wanting to remember anymore. He considers apologizing, but no words come out. Stonefur gives Blackfoot a life for integrity. Nightstar walks toward him, and Blackfoot plunges into the past. In the memory, Blackfoot hunts for ShadowClan, paws light as he catches a vole. He greets Flintfang and Boulder, both thin. Boulder warns that they may get sick, but Tigerclaw meows that they were willing to help, and Blackfoot goes to see his sick Clanmates. The warriors of ShadowClan show appreciation as he delivers prey to them. Fernshade states that the rats were the beginning of the sickness, and Wolfstep informs him of Cinderfur's death. Russetfur asks if they were staying, and he responds that he hoped he did, and thinks that he never had felt more like a ShadowClan cat then he did at that moment.

Blackfoot continues to feel shame as the images of the past fades, and Nightstar responds that he was fooled by Tigerstar, but Blackfoot had cared at that was what had mattered. With certainty, he tells Nightstar that he wanted that life, and his former leader gives him one for loyalty. The last cat steps forward, jet-black with stark green eyes. She asks if he knew her, and Blackfoot is surprised to feel her name at the tip of his tongue. She introduces herself as Shadowstar, and tells him that it won't be easy. Visions flash before his eyes, visions that never happened but but may. The founder of ShadowClan warns to be careful, as every choice changed the future, and to keep ShadowClan safe he must be wary and be smart.

Shadowstar grants Blackfoot the knowledge that StarClan did not see everything. She gifts him a life for leadership, and as the pain ceased, for the first time he feels calm, and nods at her. Shadowstar draws herself up, and announces that his old life was no more. He has received nine lives and StarClan grants him guardianship of ShadowClan. She wheels to face StarClan, and they chant his new name, Blackstar. 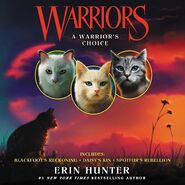