A camp is a site where a Clan makes its permanent home. It is where the cats sleep, meet, bring fresh-kill,[1] get treated for injuries or illness,[2] receive orders, share tongues, make reports to the Clan leader or deputy, and have ceremonies.[3] Some cats, such as queens, kits, and elders stay in the camp, while the warriors, apprentices, deputy, and leader patrol the territory and hunt. Each Clan has one camp.

Each camp is situated on the Clan's own territory. The main criteria for choosing a site that is:

Most camps are surrounded by some means of natural protection (such as thickets, stone walls or water) that shelter them both from weather and enemy attacks.[9] They usually have a single entrance, where only one cat can pass at a time (such as a tunnel under the thickets) along with one small entrance and exit to make dirt.[10] However, there can sometimes be secret entrances/exits, such as in ThunderClan's lake camp.[11] In addition to the natural defense, warriors patrol and protect the camp day and night.[12]

All camps contain a large, open area in their middle. Cats gather here to meet each other, sun themselves, share tongues and participate in Clan meetings. The main clearing usually also contains:

Dens are sheltered locations (such as thickets or caves) used by a cat or a group of cats to rest, sleep and recover. Beddings of moss, bracken, wool, and ferns are used to rest on. The dens are usually cleaned and tidied by the apprentices of the Clan. Most camps contain all (or several) of the following:

The following can be encountered in the vicinity of the camp:

The ThunderClan forest camp is in a sandy ravine that used to be a riverbed a long time ago. The camp consists of a clearing edged with thick grass, dotted with tree stumps, and has a thick curtain of ferns and gorse shielding it.[21] It is also surrounded by brambles, and the entrance is through a gorse tunnel. There is a tall boulder in the clearing, called the Highrock, used by the leader to call meetings.[22] The Highrock has scuffed earth around its base.[23] A vast, sandy clearing stretches to the Highrock, which is near a clump of nettles. A bit away from the nursery is a crowded corner of ferns, which have a tall barrier of gorse behind it. At one side a fallen tree lies, its tangled branches folded on the ground. The fresh-kill pile usually lies at the side of the clearing.[24] At one point, the camp was burned down in a fire, but the vegetation grew back quickly.

The WindClan forest camp is in a sandy hollow, surrounded by gorse. The entrance is through a gorse tunnel. A tall boulder, called the Tallrock is used by the leader to call meetings.

The RiverClan forest camp is on a large, well-drained, island and is surrounded by reeds. All of the dens are tightly woven. It can be reached only by swimming, and as cats from other Clans cannot swim (and hate water, in general), the camp is rarely attacked. Floods present a danger; once, a flood swept away the floor of the nursery, along with two of Mistyfoot's kits.

The ShadowClan forest camp is in a hollow with muddy ground surrounded by brambles. The entrance is through a thorn tunnel. A smooth boulder, known as the Clanrock, is at the edge of the clearing and is used by the leader to call meetings.

The SkyClan forest camp consisted of caves in the wall of a gorge and was destroyed when the Twolegs built a Twolegplace, destroying SkyClan territory, including their camp. The Twoleg nest where Smudge lives is built right on top of the old SkyClan camp.[47]

The ThunderClan lake camp is in an abandoned quarry, described as a stone hollow enclosed by tall cliffs. The main entrance is through a thorn tunnel, which can lead out of the camp after exiting the dirtplace. There is also a secret entrance that is reached by climbing the rocks.[11] The walls offer protection and keep out the wind, but cats must watch their step near the edge as falling into the hollow can be fatal. A tall rock called the Highledge is used by the leader to call meetings. Most of the dens consist of caves and crevices in the rock wall. There is also a Halfrock, which is a smooth low stone that rises out of the ground near the elders den. At one point, badgers devastated the camp, but it was rebuilt by the cats. The ThunderClan camp was discovered by Squirrelflight when she fell into it.[48]

The WindClan lake camp is a shallow scoop in the ground of the moor. Unlike other camps, it does not have any natural protection; they rely on the warriors to protect it. There are several boulders nearby, the highest being called the Tallrock and used by the leader to call meetings.

The RiverClan lake camp is on a triangle of land between two streams. It can be reached by swimming or by crossing the stream via stepping stones.[55] Twolegs often disturb the cats during Greenleaf; once, they had to abandon the camp as they were harassed by Twoleg kits.

The ShadowClan lake camp is concealed between tangles of brambles and low-hanging branches, and is a dip beneath the pine trees. The entrance is through a thorn tunnel. The leader makes their announcements from a branch hanging over their den, called the Pinebranch.[57]

The SkyClan lake camp is former ShadowClan territory given to them by Tigerheart. The camp is in a clearing among pine trees, where a small stream cuts through. Cedar and juniper grows within the camp, making it like an oasis. Low branches that hung with lichen forms a dome-like shape over the grove. The camp is edged with ferns, making natural walls, reinforced with woven bramble.[61] The Clan leader holds Clan meetings on a stump called the Tallstump.[62]

After the Sisters move out of the territory beyond the abandoned Twolegplace, SkyClan moves in.[64]

After being driven out from the forest, SkyClan made a new camp at the source of River Chell, in a narrow gorge. The Skyrock is the highest point in the camp, used by the SkyClan cats to hold Gatherings, and can be used to oversee the entire landscape.[65] At the bottom of the gorge, near the river source, there is a pile of boulders called the Rockpile,[66] used by the leader to stand on during Clan meetings.[67]

When ShadowClan and RiverClan united to form TigerClan, neither of the two camps were large enough to host all cats, therefore they made a camp in RiverClan territory, next to the river. The cats made a hill of bones to serve as a vantage point for the leader, very similar to the Highrock in the ThunderClan camp.[70]

The Tribe of Rushing Water shelter in the Cave of Rushing Water, a large cave behind a waterfall.[71] Kit-mothers and to-bes rest in separate nooks, while the cave-guards, prey-hunters, and elders sleep in the main cave. Within the cave is a tunnel that leads to the Cave of Pointed Stones, where the Healer communicates with the Tribe ancestors and sleeps.[72]

Life in the camp 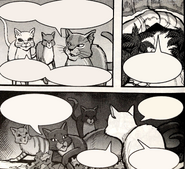 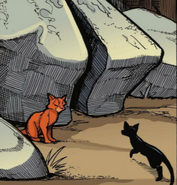 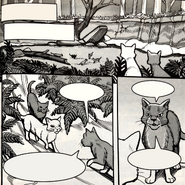 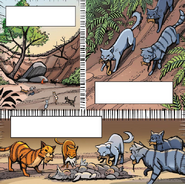 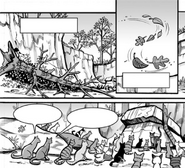 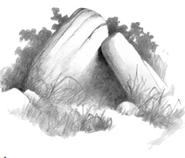 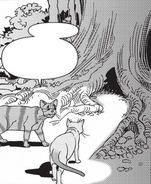 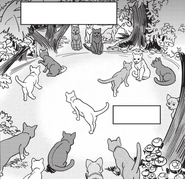 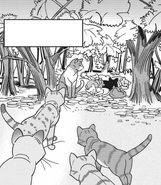 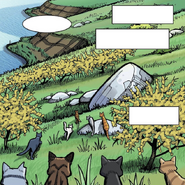 SkyClan's camp during the drought

SkyClan's camp after the flood

WarriorClan's camp in the forest
End of spoiler warning