Daisy, mourning the loss of her kits, finds out that Coriander needs help with kitting. Only the kits survive, and with no queens in ThunderClan, they need to find one. Quickly. Will they be able to face the obstacles in their way? And will Daisy ever find her place back in ThunderClan again?

Veil of Shadows, A Light in the Mist[5]

Darkness Within, Graystripe's Vow (Now), The Place of No Stars,

A Light in the Mist

Daisy's Kin is the nineteenth novella attributed by HarperCollins.[4]

Special thanks to Cherith Baldry.

A ThunderClan cat forced to choose between her past and her future.

Daisy is in the nursery, silently mourning her children's deaths, as Rosepetal and Berrynose had died because of the impostor. She recaps what had happened, with the impostor as a ShadowClan prisoner, and the five ThunderClan cats who had left on a wander shortly after the imposter had been imprisoned. Daisy wonders if she should've gone with them, as if a respected cat like Graystripe left, she wouldn't go wrong in thinking about it. Mousewhisker interrupts her thoughts, telling her to go on a patrol. He touches on the fact that Berrynose and Rosepetal would want her to be a helpful Clanmate, but Daisy bitterly thinks that four of her five kits had died because of her being a "helpful Clanmate".

Half a moon passes, while Daisy cleans her nest. The she-cat exits the nursery, spotting several cats attending to their duties. She chooses a piece of prey, but the sound of paws scuffling intrigues her. Mousewhisker tells Squirrelflight that Smoky is here, wanting to talk to Daisy. Smoky enters camp, and tells Daisy that his mate Coriander is having trouble while kitting. Squirrelflight sends Daisy, Sorrelstripe, Mousewhisker, and Alderheart to the horseplace to help Coriander.

After arriving, Daisy sees the queen. She notes that the situation is bad, while Alderheart feeds Coriander a juniper berry. Coriander makes Smoky promise that their kits won't become Clan cats or kittypets. After, Coriander gives birth to three kits, one of which is stillborn. Coriander dies after the kitting ends, leaving the kits motherless, and without milk. Alderheart advises Daisy, Smoky, and Mousewhisker to find prey for the kits, as he can chew it up before inserting it into their mouths. After feeding the kits prey, Alderheart and Daisy confront Smoky about giving them to Twolegs, as they will die without milk. Smoky firmly urges to keep Coriander's promise, reprimanding Daisy that he knows exactly how it feels to never be able to see his kits again even though they are alive, and does not want to be put through that again.

Smoky suggests finding milk from a kittypet named Coco. Daisy, Smoky, and Mousewhisker go off to find prey as it is getting late. They return to the clearing to find Alderheart and the kits gone. Smoky panics, angrily wondering if Alderheart had took the kits to the Twolegs. They luckily find Alderheart nearby. Alderheart cites that he had to move the kits away as a hawk was circling. Daisy suggests that Smoky sit vigil for Coriander. Before this, Daisy brings up yet again to give the kits to Twolegs, but is rejected by Smoky. The next day, the cats set off to find Coco. Unfortunately, they only come across a tom named Tom-Tom, who informs them that Coco had left with her Twolegs. They return, and break the news to Alderheart. Smoky, determined, goes off to find more prey for the kits, while Daisy and Alderheart discuss the idea of the kits going to SkyClan to get milk from a nursing queen. Daisy and Smoky take a walk. Smoky asks for ideas for names, but Daisy states that Smoky may get attached to them more if he names them, in case they have to give up the kits. Daisy brings up the idea of going to SkyClan, but after Smoky rejects her, Alderheart forces Smoky to. Smoky sees the logic in it, and agrees.

On WindClan territory now trying to reach SkyClan, the cats run into a WindClan patrol. The WindClan cats confront them, but after noticing that they have kits with them that need attention, they express their sympathy. Daisy and the others find out that WindClan does not have a nursing queen, so the cats continue on their way to SkyClan. Before this, Breezepelt, the cat at the head of the patrol, pulls Daisy aside and confirms that the kits may not live. After parting ways with the WindClan patrol, Daisy suggests going to ThunderClan to get traveling herbs from Jayfeather. Alderheart agrees, and shortly, they arrive at ThunderClan. After Jayfeather bluntly states that the kits are in a dire situation, he gives them traveling herbs for strength. He states that the kits should be able to travel to SkyClan. The cats go to SkyClan, but before they can reach SkyClan, a hawk attacks them, wanting the kits for food. Luckily, three Sisters appear, and drive away the hawk.

Snow approaches them, inviting them to their camp as Sunshine has milk for the small kits. The Clan cats and Smoky accept the help, and Sunshine happily nurses the kits for a while. Alderheart visits the kits almost daily, giving advice to Sunshine on how to nurse her kits as well. Daisy notes that the Sisters make fun of the Clans' ways, but are happy to take advice from their medicine cats. While staying in the Sisters' camp, Smoky decides to name the kits Daisy and Coriander, recognizing that Daisy had protected them from a hawk. Soon, Snow tells Daisy that they must leave soon. Daisy breaks the news to Smoky, and soon after, Smoky, Daisy, Little Daisy, and Coriander leave for the horseplace.

At the horseplace, Daisy's Clanmates come visit her, asking for her presence at ThunderClan. Daisy is shocked by the visit, and promises them to think about it. Smoky and Daisy talk about it overnight, and Daisy comes to the conclusion that she would be returning to ThunderClan. Coriander and Little Daisy, now awake, express their disappointment in the news, but Daisy keeps them on edge by revealing that they have a brother. Daisy returns to ThunderClan, and is surprised that every cat is happy to see her. Alderheart tells her that Spotfur wants Daisy to be by her side as she nurses her kits. Daisy embraces the fact that some cat needs her, and reminds herself that ThunderClan will always be her true home. 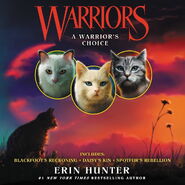