As Hollypaw, Lionpaw and Jaypaw, grandchildren of the legendary Firestar, continue their training to be warrior cats, each is haunted by a different internal struggle that could lead to trouble for all Clans.

Dark River is the second book in the Power of Three arc.[6] Lionpaw is the cat featured on the reprinted cover.[7] It features Jaypaw, Lionpaw and Hollypaw as the main protagonists. Fallen Leaves is featured in the prologue.

For Geof
Special thanks to Kate Cary

The three children of Squirrelflight and Brambleclaw, grandchildren of the great leader Firestar, have thrived in their apprenticeships: Lionpaw's strength and energy serve him well as a warrior in training, Hollypaw's honesty and her understanding of The Warrior Code, and Jaypaw explores his mysterious powers and connection to StarClan as a medicine cat apprentice.

With more experience comes both power and danger: Lionpaw makes a friend – and a discovery – that must be kept hidden; Jaypaw learns a secret that could benefit ThunderClan by damaging others; and Hollypaw knows something that could avert a battle, if she could convince the rest of her Clan.

The three are torn apart as each discovers darkness: in themselves, in the Clans, and in the past. And, as conflict begins over what it means to be a warrior, rising tensions threaten to overflow, washing away the peace that has existed for many moons.

The prologue starts with a cat from ancient times named Fallen Leaves completing a test to make him a sharpclaw. He goes down into some long winding tunnels, and finally into a cave, where he meets a tattered old tom named Rock. Fallen Leaves also notices that the Ancient Cat carries a smooth branch, with straight, crowded lines etched into the wood. He runs a claw over it, and states that the uncrossed lines on the stick marked the cats who had entered the tunnel, but had not come out. Rock then asks if it is raining outside, but Fallen Leaves says the sky is clear, although he had noted that there were signs that it would rain but did not want to be put off being a sharpclaw for any longer. Fallen Leaves now has to find his way out of the tunnels, back to the moorland to complete this challenge.

Lionpaw strikes a relationship with the young WindClan apprentice Heatherpaw, and the two sneak out nightly to meet. After being discovered by Hollypaw and Cinderpaw, they can't meet anymore along the borders. But soon, Heatherpaw discovers a series of tunnels leading into a cave with a river underground, and one of the tunnels leads onto ThunderClan territory. She and Lionpaw start meeting there where no cat can find them. They create their own Clan, DarkClan. One morning, when going back to camp, Lionpaw meets Tigerstar and Hawkfrost who say that they have been watching him, and are happy that he's becoming a warrior. Lionpaw also wonders if they approve of his meeting Heatherpaw, and they say yes, as it proves that he is independent.

One day, when exhausted during a training session with Ashfur, and ready to give up, Ashfur leaves, disgusted. Tigerstar appears and shows Lionpaw how to do the designated move along with a few embellishments. After a small border battle between ThunderClan and WindClan, Lionpaw realizes that he could have been fighting Heatherpaw there, and he breaks off the relationship with her that night. Heatherpaw is grief-stricken and leaves saying that being a warrior better be worth it.

While on a hunting assessment with Mousepaw, Cinderpaw falls from the Sky Oak and breaks her leg. Later, while collecting herbs for Leafpool, Jaypaw discovers a stick with some notches on it, vertical and horizontal. He feels that it will be important later, and puts it in a sheltered spot so he can get it later. He has to care for Cinderpaw now that she is injured, and soon discovers that she is a reincarnation of Cinderpelt. He decides to test Cinderpaw to see if there is any of her former medicine cat knowledge, but is stopped by an angry Leafpool. While he is back getting the herbs for her, he remembers the stick, which is still where he left it. It is raining, so Jaypaw leaves the stick and heads back for camp. He takes Lionpaw out when the rain stops to find it again, and finds it in the lake, after being guided by a voice he doesn't recognize.

At the next Gathering, RiverClan announces that they are temporarily forced to leave their camp and live on the island, but they don't say why. Hollypaw agrees to meet Willowpaw later, so they can talk about it. Everyone in ThunderClan thinks that WindClan will invade them because RiverClan will invade WindClan, and Hollypaw seems to be the only one to not believe so. She sneaks off to talk to Willowpaw, and after finding her, she takes Hollypaw to the old camp, where Twoleg kits have invaded it. Willowpaw says that they plan to have dealt with the problem by the next Gathering, and not to worry. But after being discovered by the other RiverClan cats, she is confined to the temporary RiverClan camp until the problem is fully dealt with. A few days later, Squirrelflight comes to take her home.

When Hollypaw is discovered missing, Leafpool asks Jaypaw to ask StarClan where she is, but he doesn't want to be used just as a device to talk to their warrior ancestors. He goes out by the lake, and has a dream about the stick. He sees Fallen Leaves going into some tunnels and talking to Rock. Jaypaw notices that Rock is holding the stick. Fallen Leaves is sent back out to escape from the tunnels, but it starts raining, and soon the tunnels flood and Fallen Leaves drowns. Jaypaw finally realizes what the notches in the stick mean. They signify all of the cats who went into the tunnels, but never came out.

Firestar asks Leafpool and Jaypaw to talk to WindClan to show that they don't want to fight. The patrol is reluctant to bring them in, but they take them in anyway. As the two of them talk to Onestar, a WindClan queen says that her kits are missing and that RiverClan must have stolen them. An outbreak breaks out and WindClan banishes Leafpool and Jaypaw as they must get ready for the battle between them and RiverClan.

News about the kits spreads through ThunderClan, and Lionpaw realizes that they must be in the tunnels. He, Jaypaw, and Hollypaw all set out for them, and find that Heatherpaw and Breezepaw are looking in the tunnels as well. Jaypaw hears Fallen Leaves's voice saying that he can lead them to the kits. Jaypaw takes the lead, and follows Fallen Leaves. They find the kits, and prepare to leave the tunnels. Rain starts to fall, and Jaypaw realizes that they are going to drown, like Fallen Leaves, if they don't get out soon because the tunnels will flood. Fallen Leaves fails to lead them out, and soon they are trapped in the cave. Jaypaw meets Rock, and Rock promises them that they will survive. They jump into the river in the cave, as the stick had used the river to flow into the lake. The eight cats all reach the lake and get out safely. They get the kits back to Onestar just as WindClan are about to attack ThunderClan, and it is assumed that RiverClan will move back from the island. The Clans are now at peace again.

Later, Tigerstar appears to Lionpaw, saying that he is proud of him. Lionpaw confesses to Tigerstar, after seeing him again, that he misses Heatherpaw. Tigerstar says that friendship is worthless and that he has learned an important lesson, and that he will teach Lionpaw how to be the greatest warrior ever.

A compiled list of the errors present in Dark River can be found here. 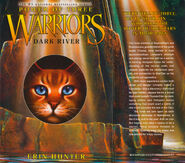 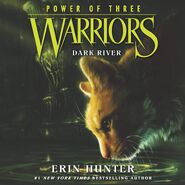 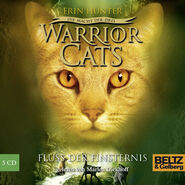 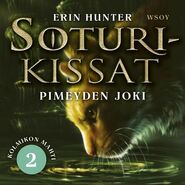 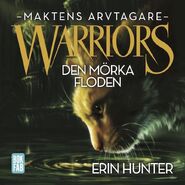