Warriors Wiki
Register
Don't have an account?
Sign In
Advertisement
in: Stubs, Under construction, Books,
and 2 more
English

View source
This article is a stub. This article needs vast improvements and you can help the Warriors Wiki by expanding it.
Spoiler warning: Plot and/or ending details follow.

With the identity of the impostor revealed, the Clans argue what to do with him and whether Bramblestar can be saved at all.

The Place of No Stars

Darkness Within is the fourth book in the The Broken Code arc.[5] It features Bristlefrost, Shadowsight, and Rootspring as the main protagonists. Leafpool serves as the protagonist for the prologue. Squirrelflight is featured on the cover, with Bramblestar and his impostor below.[blog 1]

Is the warrior code worth a warrior's life?

Exiled after a battle that left all five Clans devastated, ThunderClan's loyal deputy, Squirrelflight, must bring to light an earth-shattering truth: the identity of the cat ruling ThunderClan while wearing Bramblestar's face. With tensions among the Clans at a breaking point, another battle looms, and even Squirrelflight may not be able to ensure Bramblestar has a body to return to. If he returns at all...

Exiled after a battle that left all five Clans devastated, ThunderClan’s loyal deputy, Squirrelflight, must bring to light an earth-shattering truth: the identity of the cat ruling ThunderClan while wearing Bramblestar’s face.

While the fate of his body hangs in the balance, the real Bramblestar’s spirit has vanished. Even Rootspring is powerless to reach him—and with tensions among the Clans at a breaking point, Squirrelflight may not be able to ensure Bramblestar has a body to return to. If he returns at all.

Packed with action and intrigue, this sixth[note 1] Warriors series is the perfect introduction for readers new to the Warriors world, while dedicated fans will be thrilled to discover the new adventures that unfold after the events of A Vision of Shadows.

Beside the pool that lets them see to the Clans, Leafpool, Firestar, Tallstar, and Bluestar sit there. Firestar and Leafpool are doubtful of the fact that they will be able to connect with their living Clanmates again, while Bluestar reminds them that they are warriors, resourceful warriors, that will stop the situation. Firestar then wonders why they sent the cat they sent, wondering why they trusted him in the first place. Tallstar blames the situation on the Clans' lack of ability to follow the warrior code, but Firestar rejects his idea, stating that they can only blame one cat.

At the Gathering, Squirrelflight states that she knows who the impostor is. She reveals him to be Ashfur, surprising many of the senior warriors who remember the ThunderClan tom. The leaders discuss Ashfur's motives, concluding that he is after Squirrelflight, wanting her to join him. Some cats start arguing, blaming ThunderClan for their problems, but they stay silent after ThunderClan defends their acting leader. Squirrelflight then tells the Clans her plan to reveal that Ashfur is in fact the impostor in Bramblestar's body. While traveling back to camp, Bristlefrost questions if Ashfur had divided StarClan, which causes Squirrelflight to pull Bristlefrost aside for a talk. The ginger she-cat reminds Bristlefrost that StarClan cats were once warriors, loyal warriors, and she states that she will fix the situation and get Bramblestar back to his body. Bristlefrost admires the determination in her leader's eyes, but wonders how difficult her goal will be.

A compiled list of the errors present in Darkness Within can be found here. 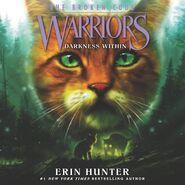