Firestar's Quest, SkyClan's Destiny, SkyClan and the Stranger, Hawkwing's Journey
Deepsands Gorge or the gorge is a wide chasm in SkyClan's territory lined by steep cliffs. It was where SkyClan's camp was located, and is the source of the River Chell.[1] It was formerly inhabited by the Kin before they were defeated by all five clans.[source?]

The gorge is a wide, deep rocky ravine that was part of SkyClan's territory, and where their camp was located. There is a stream that trickles through[1] that widens into the River Chell,[1] attached to the waterfall. A cave lined with moss, known as Whispering Cave,[2] is located near the source of the river. SkyClan's medicine cats used to share tongues there with StarClan in Whispering Cave each quarter-moon, and the moss could be gathered for use as bedding or for carrying water.[3] When the stream overflows, the many SkyClan cats sheltered in the warriors' den.[4] There are sandy cliffs with sparse vegetation, narrow paths up the faces of the cliffs on either side of the river, and piles of boulders.[5] When slippery, a cat could fall and be fatally injured. The caves inside the gorge were used as dens,[1] and offered protection for the cats. Skywatcher's former den is to the west of the Rockpile, separate from the rest of the camp.[1] On the main part of the gorge wall was the leader's den, elders' den, nursery, and at the top of the gorge is the warriors' den.[1][6] The Rockpile, is a tall, rocky clutter of stones, which was where the Clan leader addressed the Clan from, as well as performing ceremonies, and is located in the center of the gorge.[7] On top of the gorge is the Skyrock, where Gatherings took place,[8] and where the territory could be surveyed from.[9]

A Vision of Shadows

Hawkwing and his patrol meet Gravelpaw, Nectarpaw, Palepaw, Fringepaw, and Fidgetpaw. The apprentices escort them to where they are living, with Mintfur and Nettlesplash. The two patrols converse about their past, and their next plan. The former SkyClan cats realize that they cannot rebuild SkyClan with only them, deciding to travel with Hawkwing's patrol to the lake.[10]

SkyClan's camp during the drought

SkyClan's camp during the flood 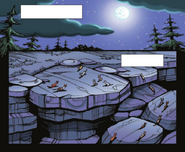 Retrieved from "https://warriors.fandom.com/wiki/Deepsands_Gorge?oldid=1556633"
Community content is available under CC-BY-SA unless otherwise noted.