A deputy ceremony is when a Clan leader names the Clan's new deputy. This happens when the previous deputy dies, retires, is exiled, or is promoted to leader. According to the warrior code, a new deputy must be appointed before moonhigh that day.[1]

The leader calls a Clan meeting, and performs the ceremony by announcing these words:

Leader: I say these words before StarClan, so that the spirits of our warrior ancestors (or former deputy name) may hear and approve of my choice. The new deputy of (Clan) is (warrior's name).[2]

Originally, there was no rule in the warrior code that said that a new deputy must be announced before moonhigh.[8] Then, a ShadowClan leader, Snowstar, died, leaving his deputy, Brightwhisker, in charge of ShadowClan. Brightwhisker wanted to go to the Moonstone to receive her name and nine lives, however, her medicine cat, Redscar, advised her not to, as she was sick with whitecough. Redscar left her to sleep for the rest of the night, but when he returned to her the next morning, he found that she had died without appointing a deputy to succeed her.

The rest of the Clan then argued over who should be the next leader. A warrior named Jumpfoot stated that he would like to be leader, and although several other cats supported him, one of the queens criticized him for being too aggressive and said that Mossfire should be leader instead. A fight broke out between Mossfire and Jumpfoot, and they both died by each other's claws in the end.

In his sleep, Redscar was visited by the former ShadowClan leader, Snowstar. Redscar expressed his worries about ShadowClan, and Snowstar asked him who he would like to be the next leader. Redscar said that Flowerstem, Mossfire's sister, should be leader, as even though she watched her sister die, her only thoughts were to help her Clan. Snowstar approved and told Redscar that he can convince the rest of the Clan of this choice if he used the right words.

Redscar then left a flower stem in the middle of the camp and said that it is a sign from StarClan. The rest of the Clan accepted this and Flowerstem was appointed leader.

Redscar said that he will tell Flowerstar to appoint a new deputy before moonhigh, so that no leader is left without a deputy for more than half a day.[9] 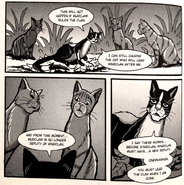 Retrieved from "https://warriors.fandom.com/wiki/Deputy_ceremony?oldid=1443075"
Community content is available under CC-BY-SA unless otherwise noted.