Jaypaw, Hollypaw, and Lionpaw must grapple with the enormous weight of their destinies. When a mysterious cat arrives to warn the Clans of dangers to come, the Clans' faith in their warrior ancestors is shaken. As tensions begin to rise between the Clans, the four Clans are thrust into all out war...with ThunderClan caught in the middle.

Long Shadows
Eclipse is the fourth book in the Power of Three arc.[6] The cat featured in the center of the original cover is Jaypaw.[7] Sol is the cat featured on the reprinted cover.[8] It features Jaypaw, Lionpaw and Hollypaw as the main protagonists. Bluestar and other StarClan cats are featured in the prologue.

Firestar's three grandchildren have learned of the powerful prophecy that foretells their destinies, and the responsibility of deciding the Clans' future weighs heavily on the three apprentices. But each secretly yearns for power; Lionpaw dreams of being unbeatable in battle, while Hollypaw longs to be a great leader, and Jaypaw knows only he could see the true past and future for them all. Their strengths are tested when ThunderClan is suddenly attacked--and all the Clans are thrown into a battle unlike any the cats have seen.

Then a dark shadow falls across the forest, and a mysterious stranger warns the Clans of more trouble to come. For the first time, it appears that StarClan does not hold the answers the cats need.

All of a sudden, the warrior code is being tested. A crisis of faith threatens to tear the four Clans apart and destroy what the cats have built their lives upon...

"Action-packed adventure. Certain to please any reader who has ever wondered what dreams of grandeur may haunt the family cat."
-Publisher's Weekly[3]

The group of cats that made the journey to the Tribe of Rushing Water are returning back to the lake. Before they leave the mountain cats, Brook and Stormfur decide that they'd like to go back to living with the Tribe. A few days after the cats came back, Tigerstar and Hawkfrost continue training Lionpaw in his dreams. Lionpaw tells them about the prophecy, but they tell him that it was just a dream.

Hollypaw and a few other cats go on a border patrol to the WindClan border because they had scented WindClan on their territory, and found fresh-kill with WindClan scent on it. There, Hollypaw spots something on a hill that she swore was a lion. The patrol laughs at her and think that she was either kidding or imagining it. The next day, Hollypaw, Lionpaw, and the rest of a patrol go to the WindClan border for a second time. There, Hollypaw scents something in the bushes, which turns out to be one of the tunnels that leads to the river, the same one from when the three saved the kits. She doesn't tell the rest of the patrol, but Lionpaw goes back to see what it was.

Meanwhile, as Cinderpaw takes her assessment, her leg is injured in a fall and delays her warriors ceremony until she has fully recovered. Jaypaw becomes frustrated; he feels that Leafpool is babying Cinderpaw's leg and believes that Cinderpaw must exercise and make it stronger. Cinderpaw then becomes overly cautious and won't even stand up to drink her own water from the pool. Eventually, Jaypaw comes up with an idea to teach Cinderpaw how to swim in the lake. The two apprentices sneak away when Leafpool is making dirt, and they head to the lake. Cinderpaw learns that she can swim, and her leg grows stronger. When Leafpool catches them, she first scolds Jaypaw, but then grudgingly admits that she is impressed with her apprentice.

Not long after that, a mysterious loner named Sol is found by a patrol and insists on being brought to the camp. Hollypaw figures out that Sol was the "lion" that she had seen on the patrol that day, as his fur looked like that of a lion. Sol takes Jaypaw and Leafpool into the woods to tell them the sun will disappear. That night, Lionpaw can't sleep, thinking that it's Foxpaw and Icepaw's whispering, but he then scents WindClan outside the apprentice den. He emerges from the den, and sees all of WindClan there. He yowls and the cats rush into battle. Firestar eventually yells to stop, and the cats in both Clans obey. When Firestar demands what is going on, Onestar claims that his Clan is there fighting because ThunderClan ignores the warrior code and helps cats out only when they beg for it. However, WindClan leaves the camp, and Firestar tells a patrol to follow WindClan to make sure they leave the territory.

Then, WindClan splits into three groups. The patrol returns and tells Firestar, who sends out two more patrols, and orders another to stay at camp in case WindClan invades. All three of the patrols get ambushed, and a battle breaks out. Hollypaw's patrol is almost defeated, so she is ordered by Brambleclaw to go to ShadowClan to ask Blackstar for help, while WindClan asks RiverClan for help, and soon all four Clans are fighting. Lionpaw finds Heatherpaw and Crowfeather and almost kills Crowfeather whilst trying to get to Heatherpaw because he believed that it was she who told WindClan about the tunnels from Dark River, though Heatherpaw claims it was Sedgekit. Immediately after, the ongoing eclipse of the sun reaches totality, causing WindClan, RiverClan, and ShadowClan to panic and retreat to their own territories.

Jaypaw convinces Lionpaw and Hollypaw that they need to find Sol and ask about the prophecy. They find him outside the Clan territories in an abandoned Twoleg nest, different from the one on ThunderClan territory, and Sol tells them all he knows. Jaypaw convinces Sol to make a nest just outside ThunderClan's territory and become their 'mentor' for the prophecy. On the way back, they get caught by a ShadowClan patrol and Sol goes to Blackstar and tells the three apprentices that he was going to stay in ShadowClan. In the time between Sol's decision to stay with ShadowClan and the next Gathering, Sol has convinced Blackstar and his Clan to stop believing in StarClan. Sol and Blackstar arrive at the Gathering together and Blackstar announces he has lost faith in StarClan and won't attend Gatherings anymore.

At the end of the book, Cinderpaw, Hollypaw, and Lionpaw get their warrior names, Cinderheart, Hollyleaf, and Lionblaze. Jaypaw watches the ceremony and feels happy for his siblings. He also detects a sense of pride coming from Leafpool and suspects that this is because Cinderheart has finally fulfilled her destiny to become a warrior. He then questions his and his siblings' destiny, whether their powers were meant to save or destroy the Clan.

A compiled list of the errors present in Eclipse can be found here. 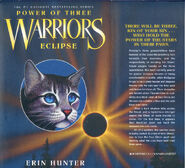 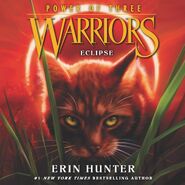 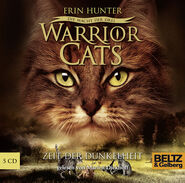 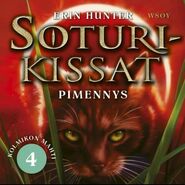