Warriors Wiki
Register
Don't have an account?
Sign In
Advertisement
in: Omen of the Stars arc, Books, Fading Echoes

Dovepaw now knows that she is the third cat prophesied to hold the power of the stars in her paws, and she, Jayfeather, and Lionblaze begin to work together to unravel the mysteries of the ancient words. But dark threats loom just beyond the forest, preying on one cat's hidden jealousy and threatening the future of ThunderClan.

Fading Echoes is the second book in the Omen of the Stars arc.[5] Ivypaw is the cat depicted on the reprinted cover.[7] It features Jayfeather, Lionblaze, Dovepaw and Ivypaw as the main protagonists. Breezepelt and Dark Forest members are featured in the prologue.

For the real Ivypaw, and all of FarDriving Clan
Special thanks to Kate Cary

After the sharp-eyed Jay and the roaring Lion, peace will come on Dove's gentle wing.

Three ThunderClan cats, Jayfeather, Lionblaze and Dovepaw, are prophesied to hold the power of the stars in their paws. Now they must work together to unravel the meaning behind the ancient words of the prophecy.

As Jayfeather tackles his new responsibilities as the Clan's sole medicine cat and Lionblaze trains his apprentice in the ways of the warrior cats, Dovepaw has her own unique ability and tries to use it for the good of ThunderClan. But the dark shadows that have preyed on the Clan for many moons still lurk just beyond the forest. Soon a mysterious visitor will walk in one cat's dreams, whispering promises of greatness, with results that will change the future of ThunderClan in ways that no cat could have foreseen.

Tigerstar watches Breezepelt as he trains with Hawkfrost. Darkstripe and Brokenstar join Tigerstar in discussing Breezepelt's past. Tigerstar then tells Hawkfrost to go and train another apprentice, and says that she is ready for it. This apprentice later turns out to be Ivypaw, in which he visits her in a dream later on.

The rest of the book is shown in four different points of view: Jayfeather, Lionblaze, Ivypaw and Dovepaw. The first point of view is of Dovepaw, who wakes from a nightmare in the apprentices' den and goes out into the camp for fresh air. She stretches out her senses and spots two cats nearing ThunderClan territory. She thinks about going to Lionblaze, but figures that she would wake the other warriors. She then thinks of Jayfeather and hurries to his den. While drying leaves, Jayfeather starts asking a few questions. Dovepaw soon identifies the two cats as Mistyfoot and Mothwing; Dovepaw senses turmoil in the RiverClan camp and Jayfeather tells her that Leopardstar must have died. Jayfeather detects guilt and sorrow coming from Dovepaw for Rippletail. He manages to lessen the sting from the nettle in her heart for Rippletail. As the Clan stirs, she and her sister Ivypaw go out on patrol with their mentors and Brambleclaw. While patrolling the lake, Ivypaw receives a splinter from a broken stick, and to prevent further injury, Brambleclaw pushes the two halves in the lake.

Jayfeather, at the same time the stick is thrown into the lake, receives a stabbing pain in his side, but there is no visible injury. He recovers quickly, and continues working. The newly named Mistystar and Mothwing arrive in camp to share the news of Leopardstar's death, and Jayfeather talks with Mothwing before they leave.

During training the next day, Lionblaze and Cinderheart are training their apprentices battle moves among the trees, learning to drop down on their enemies from above. Dovepaw hears dogs in WindClan, and sees that her old friend Sedgewhisker is being attacked. She notifies Lionblaze, but he refuses to let her help. Later that night, frustrated by the fact she was prevented from seeing Sedgewhisker, Dovepaw wakes Ivypaw and they slip off to WindClan. Dovepaw finds Sedgewhisker, but she is angry with her for trespassing and interfering. The camp awakens, and Onestar sends Heathertail and Breezepelt to escort the two apprentices back home. When they get there, the two WindClan warriors speak briefly to Firestar, and then leave. Firestar, furious with the two, gives their punishments to their mentors after speaking with them. He then sends Cinderheart and Ivypaw away, and reveals to Lionblaze, Jayfeather and Dovepaw that he knows that they are the three prophecy cats. Jayfeather tells him that they already know of the prophecy, and each cat tells him their different powers.

Out on patrol the next day, Dovepaw and the other warriors confront a ShadowClan patrol after finding some scent on their territory. Tigerheart comes over and checks the scent, covering it with his own; Dovepaw realizes it was his. She reveals this to him, who promises to speak privately to her later. Jayfeather also tells both Lionblaze and Dovepaw that he found Tigerheart sniffing at the border a half-moon ago. Dovepaw later talks with Tigerheart at the Gathering, who does not tell her what he is up to, but asks that she trust him.

Ivypaw, who has become increasingly jealous of her sister's new special treatment from Firestar and the senior warriors, has a dream of playing in a large meadow. Hawkfrost appears to her there and teaches her some new hunting moves. On awakening, she is paired up with Blossompaw to help her in her assessment; though Blossompaw taunts her for not being able to hunt well, she catches a squirrel using her new moves. Afterwards, Blossompaw, Briarpaw, and Bumblepaw pass their assessments.

The next day, Lionblaze, Jayfeather and Dovepaw are talking with Firestar when Dovepaw senses that the high winds are loosening a tree's roots, and it will crash into the camp. Firestar orders the immediate evacuation of the camp. All the cats quickly rush out, except for Mousefur, who goes back to get a mouse. Longtail tries to stop her, and when she refuses to listen, goes back into the camp himself to get it. Briarpaw follows after him, and the tree falls as they reach the elders' den. The Clan uses branches to prop up the tree so Lionblaze can get through the wreckage to the elders' den. He finds Longtail dead and Briarpaw severely wounded. They manage to get her free from the wreckage; Jayfeather accepts Leafpool's help to make Briarpaw comfortable.

Briarpaw tells them that she can't feel her back legs at all, and Jayfeather tests this theory by pricking along her spine; when he gets near the end, she can feel nothing, to the point of Jayfeather making her bleed. Leafpool advises Jayfeather to see Littlecloud, who treated a cat of a similar injury. Jayfeather journeys to ShadowClan, and Littlecloud lets him know about a warrior who broke his spine, and he ended up dying because of inactivity, and fluid filling his chest. When Briarpaw asks Jayfeather of what happened to Littlecloud's patient, he does not answer but Briarpaw quickly realizes that the cat had died. Millie hears this and yells at him for telling her that she would die. Later, Jayfeather returns and comes up with exercises for Briarpaw to do to prevent her from dying, though she will never be able to walk again.

The three apprentices receive their warrior names; Blossomfall, Bumblestripe, and Briarlight. Millie and Graystripe watch their warrior ceremonies, they watch proudly at their kits but their eyes struck with grief. Briarlight is keeping a positive attitude and working diligently through her exercises. Dovepaw and Ivypaw are growing farther apart as their differences separate them. Ivypaw continues to train with Hawkfrost, who has now progressed to showing her fighting moves. She uses some of them later in a training session, successfully downing some of the other warriors. Leafpool questions her about some of her moves afterwards, but she evades them.

At the half-moon, Jayfeather meets with the other medicine cats and travels to the Moonpool. In his dream, he speaks with Yellowfang and Spottedleaf, letting them know his and Lionblaze's suspicions of Tigerstar's training of some of the warriors in the Clans. They journey to the Dark Forest; on entering, they encounter Brokenstar. Jayfeather sees Yellowfang's memories and realizes that Brokenstar is her son. Spottedleaf gently suggests that Yellowfang leave, as the place was painful for her, and she travels back to StarClan. After Brokenstar disappears, Jayfeather and Spottedleaf travel on, finding Dark Forest cats who are battle training, including Darkstripe, Hawkfrost, and Shredtail. Tigerstar then appears to them, telling them that they are trespassing and that he is doing nothing wrong. The two eventually leave.

Lionblaze wakes up in the middle of the night in the warriors' den and can't get back to sleep. He starts to look at each cat, wondering if they could be part of the Dark Forest. Cinderheart wakes up as well, and they decide to go on a walk. Lionblaze throughly enjoys this creating a special bond with Cinderheart.

Ivypaw is brought to the Dark Forest and convinced by Tigerstar and Hawkfrost that ShadowClan is planning an attack on ThunderClan, and that Firestar should take back the strip of territory he gave them to assert ThunderClan's position. On awakening, Ivypaw goes to Firestar and convinces him with a made-up dream to get the territory back. Firestar at first goes on a patrol to warn Blackstar of their intentions; the ShadowClan leader refuses to listen to them, and they leave, promising to leave scent markers on the new territory in the morning. On arrival of the next day, the two Clans break into a battle over the territory; Russetfur is unexpectedly killed by Lionblaze, and Firestar loses a life. Blackstar gives them the territory at the end of the battle; but there is no triumph from ThunderClan in the victory. Lionblaze speculates that the Dark Forest cats stimulated the unneeded battle to weaken the Clan cats.

A compiled list of the errors present in Fading Echoes can be found here. 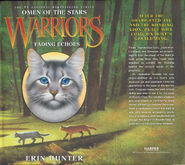 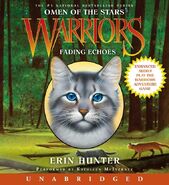 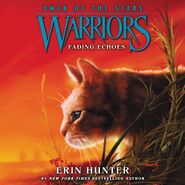 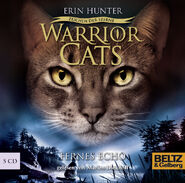 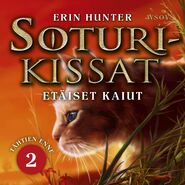