Firestar, leader of ThunderClan, sets off on a harrowing journey to find a long-lost Clan of cats that had been forced to leave the forest many moons ago.

Graystripe's Vow (Then), Return to the Clans, A Shadow in RiverClan

Firestar's Quest is the first book in the Super Editions.

There is peace at last between the warrior Clans, and Firestar is proud of the strength and unity of the cats he leads in ThunderClan. All four forest Clans are thriving, training new warriors and keeping their boundaries without conflict.

Firestar's dreams are haunted by wailing cats fleeing a terrible disaster. With unexpected help from an old friend, Smudge the kittypet, he discovers a shocking secret: StarClan, the warrior ancestors who guide his paw steps, have lied to him.

Firestar is faced with the hardest decision of his life. Can he really turn his back on the forest that has become his home and embark on a perilous quest to discover a dark truth—one that has been buried beyond the memory of living cats? Whatever he finds at the end of his journey, he knows that nothing will ever be the same again.

"This book is a fantastic extension of the popular Warrior series. Fans of the series will welcome the newest edition and the continuing adventures of Firestar. The ability and willingness of Firestar to question authority and doubt the long-standing spiritual beliefs of his fellow cats shows the evolution of the series, from simply entertaining to thought-provoking adventures that will satisfy a wide range of readers."[6]

"Firestar, leader of the ThunderClan, faces what may be his greatest challenge yet in attempting to right an ancient wrong: the refusal by four of the five clans to shelter SkyClan members displaced by Twolegs. Impelled by horrific dreams and accompanied by his mate, Firestar embarks on a dangerous quest to unite the scattered SkyClan cats. This is much longer than previous books in the popular Warriors series, but that will not deter fans, who will relish the scale of the mission, the fast-paced action, and the exploits of old and new friends."[7]

"Fans of the Warriors books will excitedly delve into Firestar's Quest, the latest addition to Erin Hunter's bestselling series. In this "super edition" standalone story, Firestar, leader of ThunderClan, discovers that the ancestral StarClan has lied to him, which leads him on a quest to uncover hidden secrets."[7]

Firestar has three strange dreams and visions of cats fleeing through moorland and calling out to him, led by a gray cat with white patches. At the time, though, he does not know who the tom is. He asks Cinderpelt about the dreams, but she cannot give an explanation. He sees the same cats at a Gathering, but no cat besides him notices them. Eventually, he decides to visit the Moonstone, where Bluestar lets him know that there was a fifth Clan in the forest, SkyClan, that was driven out when Twolegs built the Twolegplace on their habitat. Firestar thinks that StarClan betrayed him by never telling him this, and it ultimately causes him to question everything he believes about the Clans. He runs away from Bluestar due to his disappointment, then waking up from his dream.

Firestar has a dream of Silverstream, who tells him that he must help SkyClan. Later, his old kittypet friend, Smudge, comes to see him because he had dreams about fleeing wild cats like Firestar does. Firestar realizes that it was the same dream as he was having, and asks Smudge to bring him to his house, where he suspects that SkyClan's camp used to be. He also meets Hattie, his old Twolegs' new kittypet. He stays there for the night, and the ancient leader of SkyClan appears in his dream, telling about his Clan and asking Firestar to rebuild it. Firestar decides to leave to rebuild SkyClan, and tells the Clan cats about his mission, who accept his decision, but are not happy with it. Sandstorm agrees to accompany him, while Graystripe and Cinderpelt watch over ThunderClan while he is away.

Firestar and Sandstorm follow the river to its source, going through farmlands. They are attacked by dogs and have to pass a large Twoleg building, but they escape danger. On the way, Sandstorm confronts Firestar about his feelings for Spottedleaf and claims that he does not want her with him, which leads to an argument. Shortly after, they get separated when a storm breaks and a flood washes away a tree bridge Firestar had just crossed alone. Firestar desperately searches for Sandstorm, and eventually he is helped by some rogues living in a Twolegplace. Sandstorm forgives Firestar, and they continue their search for SkyClan.

At the end of their journey, they come across a gorge with caves in the cliff face, which seemingly used to be inhabited by cats. They conclude that this was SkyClan's home, but wonder where are they now. They explore the caves and meet two hostile kittypets who were apparently looking for another cat. The next day, when the kittypets return, Firestar traps them and asks about SkyClan. One of them, Cherry, says she heard stories about fierce cats who used to live in the caves, and that there is a rogue named Moony who goes to the large rock in the gorge and stares at the full moon, talking about cats in the stars. Later, Firestar and Sandstorm meet Moony, who introduces himself as Sky and claims to be SkyClan's last descendant. He tells them about the old Clan and their territories, but does not tell them why SkyClan scattered.

Firestar and Sandstorm start rebuilding SkyClan. They are joined by Sky, and soon they recruit Cherry and Boris, the two kittypets they met the first day; Clover with her three kits; and a rogue named Scratch. Later, they organize a meeting, inviting several rogues and kittypets living nearby and telling them about the Clans. Three new cats join: Leaf, Patch and Hutch. Firestar notes the powerful hind legs and tough pads of SkyClan ancestry. After naming the newcomers of the Clan with proper Clan names, he tells them about the Warrior Code and the Clan ways, and organizes patrols and mentor-apprentice pairs. Their numbers grow when Rainfur asks them to rescue his mate, Petal, and their kits, who later join SkyClan. They decide on the borders and mark the edges of their territory. Firestar acts as leader to the cats and grows to like them, but knows that he must find a real leader and a medicine cat for the Clan. He wonders whether StarClan will show him who will that leader be. Soon, Skywatcher dies, but not before delivering a prophecy about the arrival of three powerful cats, descendants of Firestar.

Soon, SkyClan's existence is menaced when a large number of rats who live in an abandoned Twoleg barn at the edge of the nearby Twolegplace show up and attack patrols. Firestar realizes that the rats were the reason why the ancient SkyClan was destroyed. The rats attack the cats, trying to weaken them, and the Clan decides to take the battle to the barn, attempting to drive out the rats. They prepare and train for the battle, and they also find a medicine cat, a kittypet named Echo.

The SkyClan warriors set out to drive out the rats from the abandoned barn. Firestar manages to kill the rats' leader, but loses a life in the process, and Rainfur dies in the battle. With their leader dead, the rats scatter and stop menacing SkyClan. Shortwhisker also decides to leave the Clan, saying he was a coward and wasn't willing to risk his life for the Clan. After the rats are defeated, Leafdapple is appointed leader, and Sharpclaw becomes her deputy. Sharpclaw is surprised, but accepts. Afterwards, Firestar and Sandstorm return to ThunderClan.

The epilogue shows Firestar and Sandstorm caring for their two kits, Squirrelkit and Leafkit. Squirrelkit was named for her bushy tail, Leafkit in memory of Leafstar and possibly Spottedleaf. Firestar is then reminded of Skywatcher's prophecy and wonders which of his daughters will give birth to such powerful cats.

A compiled list of the errors present in Firestar's Quest can be found here. 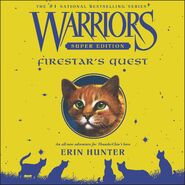 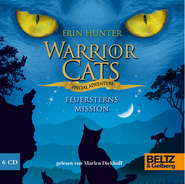 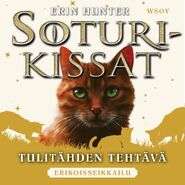