Dawn of the Clans, Cloudstar's Journey, Mapleshade's Vengeance, The Prophecies Begin, Midnight, Moonrise, Dawn, Super Editions, Code of the Clans, Battles of the Clans
Fourtrees, or Druid's Hollow, is a group of four, large oak trees in a hollow within the center part of the forest territories.[1] Many moons before Firestar called the forest home, a battle took place at Fourtrees,[3] where the fighting Clans were advised by their ancestors to avoid unneeded bloodshed and instead learn to live in peace.[4] In the following generations, the Clans continued to meet at Fourtrees under a truce,[5] to share news with one another.[6]

In the middle, there is a steep-sided clearing[7] and in the center is a large rock called the Great Rock,[8] which is noted to have jagged edges.[7] The Clan leaders use it to look down on the Clans and share their news during Gatherings.[9] They are also referred to as the Great Oaks.[10]

After the Clans left the forest territories for their own safety, Twolegs destroyed the Fourtrees clearing to make their own territory.[11] Many moons following, the clearing is made into a circular path with smooth grass at the top of the hollow. The remnants of the Great Rock remain as a pile of crushed rocks and the four oak trees that gave Fourtrees its name are cut down.[12]

This is a list of deaths, ordered chronologically, that took place at Fourtrees.

Dawn of the Clans 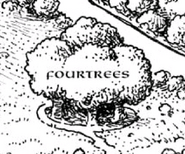 Fourtrees on the reprinted maps 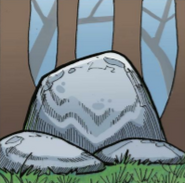 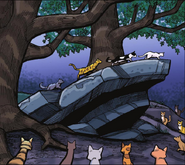 The following information is from sources considered non-canon or retconned.

Retrieved from "https://warriors.fandom.com/wiki/Fourtrees?oldid=1565502"
Community content is available under CC-BY-SA unless otherwise noted.