Graystripe served ThunderClan for many moons before retiring to the elders' den, and was Firestar's most trusted friend and deputy. He promised Firestar that he would never abandon his home. But as new tensions strain ThunderClan, Graystripe will need to call on all of his long history, leaving ThunderClan behind in hopes of finding an answer that might save it.

Firestar's Quest, A Shadow in RiverClan, Return to the Clans (Then)
Darkness Within, Daisy's Kin (Now)

Shattered Peace (Then)
The Place of No Stars (Now)

Graystripe's Vow is the thirteenth book in the Super Editions.[3] It features Graystripe as the main protagonist and flashes back between his time as deputy during Firestar's Quest and his time as an elder following Veil of Shadows. Gremlin and Monkeystar are featured in the prologue and comic, respectively.

Special thanks to Kate Cary[5]

Before Graystripe retired to the elders' den, he promised his old friend Firestar that he would never abandon their home. But that was many moons ago, and as new tensions strain ThunderClan, Graystripe begins to wonder if the time of the Clans has ended. Plagued by doubts, he leaves ThunderClan on a journey he hopes will lead him to the answers he seeks—a quest that will take him back to the Clans’ old forest territories.

In this Super Edition, set during the events of The Broken Code, respected ThunderClan warrior Graystripe seeks a path to the Clan’s future by returning to his past—and the Moonstone in the Clans’ old forest territory.

Graystripe served ThunderClan for many moons before retiring to the elders’ den. As Firestar’s most trusted friend and deputy, Graystripe promised that he would never abandon his home. But as new tensions strain ThunderClan, Graystripe will need to call on all of his long history, leaving ThunderClan behind in hopes of finding an answer that might save it.

Join the legion of fans who have discovered the epic adventures, fierce warrior cats, and thrilling fantasy world of the mega-bestselling Warriors series. This stand-alone entry is perfect for new readers and dedicated fans alike.

Gremlin and Snake watch as Firestar and Sandstorm leave ThunderClan territory. The two return into Twolegplace, meeting with the remnants of BloodClan. There, the Clan's new leader, Fury, is pleased to hear of the news, rallying her followers in order to gain revenge on the Clans for the death of their former leader. All the while, Gremlin worries that the timing could not be worse due to her unborn kits, heaving in her mind. Back in ThunderClan territory, Graystripe quietly grieves the loss of his mother, Willowpelt, just as the rest of ThunderClan does as well. He watches over camp, seeing many cats going about their daily tasks as though nothing was any different. However, he overhears Ferncloud mention that Firestar's scent had disappeared. She explains to Brightheart, an expectant queen that Dustpelt had begun doubting Firestar's absence as only a temporary thing. This comes as a shock to Graystripe, who begins doubting his position as temporary leader.

Cinderpelt has him refocus his attention as a hunting patrol returns to camp. Ashfur, Cloudtail, and Mousefur are a part of the patrol and each return with their catches. Ashfur makes a remark about Firestar and Sandstorm becoming kittypets. This sparks an argument about where the two ThunderClan cats really are as Graystripe attempts to keep his promise to his friend. He states that the pair had been chosen by StarClan for a mission, and that he would act as a temporary leader only, due to his rank as deputy. Mousefur flatly tells him not every member of the Clan is happy with that decision, reminding him of his switched loyalties between ThunderClan and RiverClan. Cinderpelt defends him, but Ashfur in particular continues to give Graystripe trouble because he thinks Dustpelt should have been deputy instead. The conflict fizzles out, but the tension remains as Cinderpelt ends it for the time as she incorporates StarClan into the discussion.

Brackenfur and his patrol race into camp with news of WindClan hunting on ThunderClan territory near Fourtrees. At first Graystripe hesitates to take action, but decides to send additional patrols and if the problem persists, to discuss it again. While some cats seem discontent with his decision, they go along with the orders. Later that night, Brightheart begins kitting. Graystripe is struck with the memories of Silverstream's death kitting their own son and daughter. Due to this, he is wary but congratulates both Brightheart and Cloudtail on their daughter, Whitekit. The following morning, Thornclaw repots WindClan crossing the border again. As such, Graystripe calls a Clan meeting to discuss the issue. The gray deputy however has his doubts about the WindClan leader, not thinking the other tom would deliberately cause trouble. Ashfur starts trouble again, calling for Dustpelt to be deputy instead as some other ThunderClan warriors agree. As this starts another argument, Mousefur and her border patrol return to camp with news of Russetfur and Rowanclaw wanting to speak with Firestar.

Graystripe thinks about his position as an elder, and imagines talking to Millie. He imagines Millie giving him advice, but is interrupted by Plumstone and Thriftear arguing. The two young warriors ultimately state their opinions about elders while reconciling. Later, Thornclaw and Lionblaze are arguing about ThunderClan's situation. Thornclaw states that they should not trust their leaders blindly, considering what happened with Bramblestar's impostor. He adds that the leadership after Firestar was decided by kin. Lionblaze argues against this, and Thornclaw says that Lionblaze should not be deputy. Cats ask Thornclaw if he wanted to be deputy, and they don't believe him when he says no. Squirrelflight gets involved, and after lots of arguing, Snaptooth, Flywhisker, Thornclaw, and Flipclaw end up leaving ThunderClan on a wander. Graystripe declares to the Clan that he is leaving too, shocking everyone.

In ThunderClan territory, the wandering cats encounter a SkyClan patrol. They escape a potential attack, but Snaptooth reveals that he and the rest of the patrol are leaving ThunderClan. Thornclaw berates Snaptooth for this, while Graystripe suggests a hunt. Soon after, Flipclaw expresses his feelings for Flywhisker, and after rejecting him, Flywhisker offers Graystripe a time to rest, so he "does". But after the patrol leaves to hunt, Graystripe also hunts. He catches a fat rabbit, and goes back.

When the others return, Thornclaw calls out the rabbit, and Graystripe takes credit for catching it, and notices that Flywhisker is unable to meet his gaze. Later, the patrol is deciding what to do next. Flipclaw again sneakily expresses his feelings for Flywhisker, and after yet another rejection, Thornclaw surprisingly leaves. The patrol is shocked, but they are even more shocked when Graystripe announces that he plans to travel to the Tribe of Rushing Water to visit his son Stormfur.

The next day, he leaves the patrol, journeying to the mountains. Later, Flipclaw catches up to him, telling him that he wants to join. 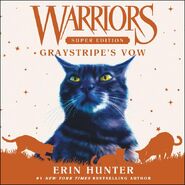