View source
This article is a stub. You can help the Warriors Wiki by expanding it.
Spoiler warning: Plot and/or ending details follow.

Highstones is the Clan term for an abandoned Twoleg mine in the forest territories. They are the tall jagged peaks surrounding Mothermouth,[1] the large cave opening leading to the Moonstone. It is home to the Moonstone, a sacred place to Clan cats.[2]

Highstones are the rocks[3] that are home to Mothermouth, a pitch-black cave, which contains the Moonstone.[2] Highstones can easily be seen from far away.[1] The earth is darker here, the grass coarser underpaw, giving away to bare rocky soil dotted with patches of heather.[4] Mothermouth is square and black, and yawns beneath a stone archway.[5] Inside Mothermouth is a tunnel, leading to the Moonstone.[6] The Mothermouth got its name because of its very large mouth-like opening to the Moonstone. The air inside is stale, with a tang of dust and stone.[7] Mothermouth also has two tunnels, one to the Moonstone, and the other that goes somewhere deep into the earth. Cats must find their way through a tunnel by using their whiskers to feel the edges of it,[7] or by following the scent trail of the cat ahead of them. The tunnels of the Mothermouth are very rocky and may cut the pads of a cat if they have gone down the wrong tunnel. There are tunnels branching off in opposite directions, but only one leads to the cavern. It is much like a maze. The "right" tunnel has tall, smooth walls glistening with moisture. It is a rough, downward slope.[7]

It opens up to a cavern arching high above the cats visiting. The vast curved walls in the cavern reach to the ceiling, finally opening to a hole. The scents of heather and wind wash down from the hole, and the moonlight illuminates the Moonstone.[2] There is scent of water, stone, and earth, and a jumble of strange odors surround the place.[6] The cat is then dazzled by an extremely bright light, caused by the moon reflected onto the Moonstone from a hole in the ceiling, and it bleaches the cat's fur white.[8] Cats are often surprised by the power of the Moonstone.[9] The Moonstone is several tail-lengths high.[10] To communicate with StarClan, all the cat must do is press their nose to the rock, and they fall asleep almost immediately.[11] It is said to be very cold, and some cats believe they are not dreaming until they open their eyes, realizing their nose is no longer pressed against the rock.[12]

This is where leaders and medicine cats go to share tongues with StarClan.[13] Leaders go there to receive their nine lives or ask StarClan for help.[14] Once they enter Mothermouth, the cats must stay silent, the medicine cat or the leader about to receive their nine lives must lean down and place their nose on the Moonstone. They will gradually fall into a special dream sent by StarClan.[13] They then dream about their warrior ancestors, and are able to talk with them.[15] Cats come here as part of various ceremonies, such as medicine cats sharing tongues with StarClan every half-moon,[16] and leaders gaining their nine lives.[17] When leaders go to the Moonstone, they are forbidden to eat or drink anything beforehand, including traveling herbs.[18] They receive nine lives and have the second half of their name replaced with the suffix "–star" to honor StarClan.[19] Leaders and medicine cats also come here if they need guidance from their warrior ancestors, but cannot wait for members of StarClan to walk in their dreams or have not seen them for many moons and need guidance.[6]

To get there, ThunderClan must go through WindClan's territory,[20] but although cats are supposed to be given free passage through to the Moonstone, this law is not always obeyed, as seen in Rising Storm.[21] Medicine cats would travel together at the half-moon to share tongues with StarClan, allowing the medicine cats to travel on other Clans' territory.

Mothermouth, and the Moonstone, are left behind when the Clans leave the forest in Dawn, and replaced with the Moonpool in the Lake territories, which was discovered by Leafpool when she was an apprentice and previously used by the ancient version of the Tribe of Rushing Water, in which Rock was a leader. The tradition in which apprentices would journey to Mothermouth was not used any longer after the Clans moved to the Lake.[22]

Moth Flight, an ancient WindClan cat, was a cat who was easily distracted. When Wind led a patrol to ShadowClan's side, Mothflight saw a blue feather floating in the breeze. She soon went closer and closer to the Thunderpath, where a monster was coming. Gorsefur saw and risked his life by pushing her away from the monster.[23] Angrily, Wind demands to know what exactly she was doing. Mothflight replied that the feather was calling to her. Even more furious now, Wind banished her from WindClan, and Mothflight kept walking in the direction of the feather.

Soon she saw a large hole in the ground,[24] and because of her free-spirited nature, decided to climb down it. She ended up at a large glittering rock, now called the Moonstone,[24] and instinct told her to press her nose to it. She did, and she woke up with StarClan surrounding her. They congratulated her, and told her that this was the Moonstone. They also told her that at the next half moon, she should bring three of their chosen cats to become the first medicine cats. Mothflight said that she was exiled, so she couldn't carry out these plans. StarClan says that she was exiled for the very reason of discovering the Moonstone. StarClan sends a dream to Wind, who now welcomes back Mothflight as a medicine cat. Cloud Spots, Dappled Pelt, and Pebble Heart also become medicine cats of ThunderClan, RiverClan, and ShadowClan, respectively.[25] Because Mothflight was a WindClan warrior, WindClan feels as if they are more loyal and close to StarClan by usually sleeping out under the stars.[26]

The Clan cats' only passage to Highstones is to cross the Thunderpath.[28] Cats can be easily killed on it.[29] WindClan lives closest to Highstones, and RiverClan and ThunderClan cats must cross WindClan grounds to reach it.[20] Cats are supposed to be given free passage by WindClan, but this law is not always obeyed, as seen in Rising Storm.[30]

Highstones as shown in reprinted maps 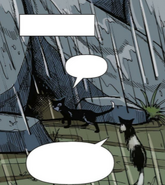