How far will one warrior go for the power to protect her Clan?

The Darkest Hour, Blackfoot's Reckoning, A Shadow in RiverClan

Leopardstar's Honor is the fourteenth book in the Super Editions.[5]

Special thanks to Kate Cary.

In this Super Edition, devoted RiverClan warrior Leopardfur discovers just how far she will go to protect her Clan.

Since her kithood, Leopardfur has known that she would one day save RiverClan from destruction. The ambitious ThunderClan deputy Tigerclaw believes he can help her fulfill her destiny, but as Leopardstar rises to follow in Crookedstar's paw steps, she must decide what kind of leader she will be—one who maintains the peace among the Clans, or one who is willing to sacrifice anything for the good of her own.

Join the legion of fans who have discovered the epic adventures, fierce warrior cats, and thrilling fantasy world of the mega-bestselling Warriors series. This stand-alone entry, set before and during the events of The Prophecies Begin, is perfect for new readers and dedicated fans alike.

At the confrontation at the Bonehill. Leopardstar feels conflicted as Tigerstar orders Stonefur to kill Featherpaw and Stormpaw, but she tells herself that this is the way for her Clan to become strong.

During her kithood, Leopardkit is friends with Sunkit, but Skykit's a bit of a bully, claiming that since Leopardkit's mother Brightsky died after giving birth to her, that Leopardkit killed her. She even goes as far as to nearly drown Leopardkit after she cheats during a game of hide-and-seek, resulting in Leopardkit fearing the water. Mudfur comforts Leopardkit by telling her that shortly after she was born, he had a dream that she would be important to all the Clans.

Leopardkit convinces Hailstar to promote her early, and she's apprenticed to Whitefang. Sunpaw helps her get over her fear of swimming, and Leopardpaw excells in her training. Mudfur decides to become a medicine cat, and Leopardpaw wonders if his words about her future had been a prophecy. Leopardfur earns her warrior name, and not long after, Hailstar dies from rats leaving Crookedjaw as leader.

Two years after earning her warrior name, Leopardfur hopes to become a mentor. She hopes to mentor Sunfish's son Whitekit, but her former mentor Whitefang is chosen instead. However, while leading a patrol to Sunningrocks, they encounter a group of ThunderClan cats, and Redtail provokes Leopardfur into a battle. Whitefang is killed in the process, while Sunfish is badly wounded and dies from infection several days later. Leopardfur is assigned as Whitepaw's new mentor, and before Sunfish dies, Leopardfur promises to look after him as his mother. Things are difficult for the two of them at first, but Frogleap helps Leopardfur understand the best way to reach her apprentice. Afterward, she spends more and more time with Frogleap, and she starts to wonder if she wants to be his mate.

While RiverClan confronts ThunderClan at Sunningrocks, Leopardfur and Whitepaw save Blackclaw from a pike, and Leopardfur decides he's ready to become a warrior. The patrol from Sunningrocks returns with news of Oakheart's death. Leopardfur feels that she should have been there, even though she already did help save a Clanmate's life. The following morning, after Oakheart's vigil, Leopardfur sends out some patrols. Crookedstar gives Whiteclaw his warrior name and names Leopardfur deputy, much to her surprise. Mudfur, however, doesn't seem too pleased that she was chosen.

Crookedstar gives Brokenstar and ShadowClan the right to hunt in RiverClan territory, and Leopardfur is upset that he and Mudfur don't seem to trust her judgment. Frogleap and Leopardfur split ties romantically as Frogleap doesn't wish to get in the way of her plans for the future when he wishes to start a family, and she sorrowfully agrees. Frogleap finds comfort in Mosspelt who is soon expecting his kits. Leopardfur's jealous and in an attempt to prove that she isn't, she invites Mosspelt along on a mission to steal fish from a Twoleg, which results in the tortoiseshell getting briefly caught by the Twoleg. Leopardfur speaks to Tigerclaw of ThunderClan at Gatherings, and she feels like they understand each other since they're both deputies that want the best for their Clan and don't always agree with their leaders. Mudfur, meanwhile, has a vision of Tigerclaw with a fish struggling in his jaws, and warns Leopardfur to be wary of his intentions.

Crookedstar falls ill for a short time, but recovers before Leopardfur gets a chance to show her Clan what kind of leader she'll be one day. Meanwhile, WindClan is expected to return to their territory any day since ThunderClan is fetching them back. Whiteclaw confesses to Leopardfur that he has a crush on Silverstream, his adopted sister, and Leopardfur approves. As they patrol that day, they encounter a joint WindClan-ThunderClan group near the gorge, and Whiteclaw attacks. It erupts into battle, and only ends when Whiteclaw falls into the gorge. Leopardfur falls into a deep depression for several days, blaming herself for his death.

At the next Gathering, Tigerclaw mentions wanting to "shake things up", and he suggests to the Gathering that RiverClan and ShadowClan are invading his Clan's territory. Meanwhile, the two aforementioned Clans think that this is an attempt by an allied ThunderClan and WindClan to start a war, so they attack WindClan's camp preemptively, though lose when ThunderClan shows up to aid WindClan.

Leopardfur witnesses Silverstream meeting in secret with Graystripe of ThunderClan—the cat who Leopardfur believes killed Whiteclaw. Although angry, Leopardfur is also sympathetic, and agrees to give the young she-cat time to think things through. The river floods, and the fish become poisoned; at first Leopardfur is certain that Graystripe must be involved, but it turns out to be caused by Twoleg rubbish.

The floods bring more trouble as well: Frogleap is killed in an accident when hit by a branch, and the following day two of his kits drown when the camp floods. Thankfully, Mistyfoot's two missing kits are rescued by Fireheart and Graystripe, and they start to bring RiverClan some prey while their territory is damaged. Not long afterward, Silverstream dies giving birth to her kits, and Graystripe decides to join RiverClan to be with them.

Leopardfur is curious when she hears that Tigerclaw has been spotted with rogues, and she remains distrustful of Fireheart, who has replaced him as ThunderClan's deputy. Not long afterward, ThunderClan shelters with RiverClan when a fire rages through their territory, and Leopardfur wonders about Graystripe's loyalty when she sees how comfortable he is among his former Clanmates.

At the next Gathering, Tigerclaw is now leader of ShadowClan. Crookedstar seems old and frail compared to him, and he grows ever weaker. Tigerstar comes to visit Leopardfur, and he tells her that Fireheart manipulated Bluestar for power and that that's why he left ThunderClan, and warns her not to trust Graystripe. Not long afterward, Crookedstar joins StarClan. Leopardstar receives her nine lives: from Riverstar acceptance, Whiteclaw empathy, Hailstar bravery, Frogleap devotion, Oakheart unity, Silverstream forgiveness, Whitefang patience, Sunfish friendship, and Brightsky love. She names Stonefur as her deputy.

At the next Gathering, Leopardstar realizes that Bluestar isn't in her right mind, and she decides that now is the time to take back Sunningrocks. She nearly succeeds, but Graystripe betrays her to save Fireheart. She's furious at both that and the fact that Mistyfoot and Stonefur didn't kill Bluestar and Fireheart. Not long afterward, Graystripe's kits, Featherpaw and Stormpaw, are apprenticed to Mistyfoot and Stonefur. Leopardstar then overhears them talking in secret: they've just learned they're actually Bluestar's kits. She's shocked that she's just made a half-Clan cat her deputy, and apprenticed the two half-Clan apprentices to them.

Tigerstar has been talking to Leopardstar, suggesting that they change the number of Clans in the forest to two—or even one—so that there will be fewer borders and no cat will go hungry. Finally, she agrees—provided that they lead equally. Mudfur tries to convince her not to do this, and Leopardstar knows she has to get him out of her fur, so she exiles him, claiming to the Clan that he has to find a greencough-curing herb in the mountains. Tigerstar and Leopardstar combine their Clans to form TigerClan, Tigerstar sets up a place called the Bonehill in what will be the new TigerClan camp, he starts talking frequently about how they cannot trust half-Clan cats, and he brings a Twolegplace cat named Scourge to meet her, explaining that they have allied with him.

RiverClan overall isn't happy with the whole TigerClan situation. Leopardstar starts to notice how malicious Tigerstar seems, and how he frequently oversteps her. He holds the "trial" at the Bonehill to condemn the half-Clan cats, and orders Stonefur to kill Featherpaw and Stormpaw. When Stonefur refuses and Leopardstar relents, Tigerstar orders Stonefur's death and he is killed; Leopardstar realizes how much of a mistake she's made. She stands up to Tigerstar, but he implies that he, Blackfoot, Darkstripe, and the rest of ShadowClan will kill her and her Clanmates if she disobeys. Tigerstar brings TigerClan to attack WindClan, where he kills an innocent apprentice in order to send a message to Firestar.

Leopardstar confides with Mudfur about how much she has failed as a leader. He reassures her that he still thinks she's the cat who can save the forest, and suggests that when Tigerstar brings TigerClan to fight ThunderClan and WindClan, that she have RiverClan join the other two and defeat Tigerstar. She fully intends to do so until she sees that Tigerstar has brought along Scourge's cats, BloodClan, and she gives up on this plan, feeling that it's hopeless. Scourge, however, doesn't order BloodClan to attack, and Firestar takes the opportunity to explain all of Tigerstar's crimes. Tigerstar attacks Scourge, who slices him open, making him lose all of his nine lives at once. Scourge gives the Clans an ultimatum: either they leave the forest, or fight in three days.

Leopardstar feels hopeless, but Mudfur gives her more reassurance, and she agrees to join together with the other Clans to fight BloodClan. On the way, she apologizes to Mistyfoot and offers her the chance to return to RiverClan as their new deputy. Mistyfoot initially says she'll think about it, but then makes up her mind and accepts. Leopardstar gives a rousing speech; she knows that the Clans will win, and that although she nearly destroyed RiverClan, this is how she'll save it.

In the comic, Mistyfoot has gone missing, and Leopardstar thinks that it might be her fault since things have been strained between them lately. What the Clan needs now is stability, however, and she names Hawkfrost as her temporary deputy. They continue to search for Mistyfoot, and Mistyfoot's kit Reedpaw is upset, keeping a constant watch for his mother at night. Leopardstar tells him that she's swallowed her pride and asked the other Clans for help in finding her. That's when Mistyfoot returns to the camp. Leopardstar promises to never let her down again, and she reflects on how perhaps Mudfur's vision didn't mean that she'd lead RiverClan to greatness, but that she'd find the cat who would. 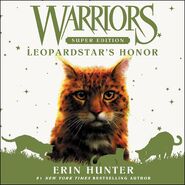