As doubt rocks the forest, Firestar's three grandchildren are determined to convince the Clans that their faith in StarClan and the warrior code is more important than ever-and each one must struggle with their own hopes and fears. At the same time, murderous rage lurks in the most unexpected of places, and one cat will reveal a breathtaking secret...

Dedicated to the memory of Jimmy, Dana, and Emmy Grace Cherry
Special thanks to Cherith Baldry

The Clans are in turmoil. ShadowClan has turned their backs on StarClan and pledged to follow the dark predictions of Sol, the strange cat who predicted the solar eclipse. But not all the cats have lost faith in their warrior ancestors...

Jaypaw is convinced that StarClan still holds an important place in The Warrior Code, but his search for answers leads him far back into the past of the Clans, farther back than even StarClan can remember. Lionblaze, tortured by violent dreams and bloody visions of himself killing Heathertail, wishes he had never been prophesied to be one of the three...but to turn his back on his denmates would be the ultimate betrayal. And Hollyleaf is terrified that once the Clans lose their faith, the warrior code will fall apart. She's willing to fight tooth and claw to preserve it--whatever the cost. In these turbulent and confusing times, claws are unsheathed, fangs are bared, and the dark undertake of the forest is revealed.

And when murder stalks into the heart of ThunderClan, the cats realize that the darkest shadows don't always lie outside the territory.

"In the fifth episode of the Warriors: Power of Three series, one cat's decision thrusts the entire StarClan into crisis. When ShadowClan leader Blackstar announces that his clan is abandoning the Warrior Code, the future itself seems endangered. To reclaim a sense of purpose, Jaypaw must search deep into memories forgotten or long-buried. A significant hinge novel in a reader favorite series."

It is revealed in the prologue that Midnight, the stargazing badger, was the one that told Sol of the eclipse, and told him about Clan ways. The founders of the Clans, Thunder, River, Shadow, and Wind, are angry with Midnight for revealing the secrets of Clan life to a loner. Afterwards, when the founders disappear into mist, Rock appears out from behind some bushes, and agrees with Midnight that the Clans are currently in trouble.

Blackstar lets Sol take control of ShadowClan, having given up on their warrior ancestors. Hollyleaf, Lionblaze, and Jaypaw go to spy on ShadowClan, hiding in a tree and watching Littlecloud object to turning away from StarClan and be banned from visiting the Moonpool. They go back to camp troubled. Tawnypelt and her kits Flamepaw, Tigerpaw, and Dawnpaw come to ThunderClan, asking to stay there; they didn't want to be in ShadowClan if it meant that they couldn't believe in StarClan. Greencough breaks out and Millie and Briarkit, one of her kits, are the first victims, but it continues to spread to many more ThunderClan cats. Graystripe and the healthy kits, whom Daisy is feeding, are worried about Millie.

While visiting the Moonpool, Raggedstar and Runningnose visit Jaypaw in a dream and beg him to help ShadowClan in any way. He comes up with the idea to create a fake sign from StarClan. He talks to Lionblaze, Hollyleaf, and Tawnypelt's kits and they all agree to pitch in and help create fake a sign from StarClan to get ShadowClan to get rid of Sol. Tigerpaw lures Littlecloud and Blackstar to the brink of ShadowClan territory while the others knock down three pine trees. Tigerpaw pretends to have been captured by a StarClan cat and would not be let out until ShadowClan started believing in their warrior ancestors again, and every cat there is surprised, even the perpetrators of the sign, when Raggedstar and Runningnose come down, telling Blackstar and Littlecloud that Tigerpaw is safe but they must restore faith to StarClan. They agree and drive Sol out of the Clan. Tawnypelt, Tigerpaw, Flamepaw, and Dawnpaw return to ShadowClan. Hollyleaf still has a feeling that they have yet to see the last of Sol.

Greencough continues to terrorize ThunderClan. Firestar comes up with the idea to temporarily shelter the sick cats in the abandoned Twoleg nest, but soon loses a life, causing everyone to panic. The Clan is dangerously short of catmint, but Jaypaw knows that there is a fresh supply in WindClan territory. He wanders in his dreams through the underground tunnels and finds Fallen Leaves. He ventures back to the time of Fallen Leaves' tribe as a young Sharpclaw called Jay's Wing. When he mentions the Clans and the herb horsetail, they think of him as crazy but he soon fits in, and realizes that these cats are the ancestors of the Tribe of Rushing Water, so when they are debating if they should leave for the mountains as a new home, he votes for them to go. Right after they leave, Jaypaw is considering if he should continue with them as Jay's Wing, but Rock tells him that he has done every thing he can. Jaypaw asks if the real Jay's Wing will be back now, but Rock says he disappeared at this time. Jaypaw is disappointed to leave Half Moon, a pretty she-cat who falls in love with him. When he returns to the Clans, he walks into Kestrelpaw's dreams and asks him where catmint can be found. Kestrelpaw, not knowing that it is the real Jaypaw and not just a dream, eagerly shows him a supply of catmint in WindClan territory. Jaypaw then asks Lionblaze to go fetch the catmint. Lionblaze refuses because of his nightmares of him killing Heatherpaw, but as the greencough gets worse, he finally goes. He meets Heatherpaw, the exact thing that he wished would not happen, who saw him stealing. She says she is now Heathertail. Lionblaze is worried that his murderous dreams will come true and he'll kill her against his control.

When Lionblaze brings the catmint, everyone is healed and returns to the camp. Jaypaw and Leafpool go to the Moonpool and he receives the name of Jayfeather, and the rank of a full medicine cat. Afterward, life is almost back to normal.

Then, during a storm, the camp catches on fire. Jayfeather, Lionblaze, Hollyleaf, and Squirrelflight are trapped, but Squirrelflight makes it through the flames and drags a stick through in an attempt to save the kits, but needs some assistance. Ashfur heroically leaps in and drags it all the way through. Just as Lionblaze leaps on, though, Ashfur blocks the way. Squirrelflight begs him to let them through but he tells her that he never forgave her after she left him for Brambleclaw and reveals he was the one who helped Hawkfrost set the trap for Firestar to show her the pain of losing a loved one as he had faced. He said that he will now kill Hollyleaf, Lionblaze, and Jayfeather in another attempt to hurt her. Squirrelflight says that he cannot hurt her that way, because they are not her kits. She explains how she kept the secret from Brambleclaw and the whole of ThunderClan. Ashfur lets them live, but he threatens to tell her secret, and she is shocked that Ashfur would betray her like this. Hollyleaf and Lionblaze refuse to speak to her even when she says that she couldn't have loved kits of her own more, yet she refrains from telling them who their parents are, and they begin to doubt whether they really are the Three the prophecy speaks of.

The fire fades away and all the cats get the camp set up. Three days before the Gathering, Ashfur asks Firestar if he can go. Hollyleaf, Lionblaze, Jayfeather, and Squirrelflight are worried that he is doing it to publicly announce Squirrelflight's secret. Between then and the day of the Gathering, the three warn Ashfur that he will regret it if he reveals the secret. Although he is frightened, he refuses to listen to them. Right before the Gathering, the patrol of warriors going notices that both Ashfur and Squirrelflight are missing. Squirrelflight later shows up, wet and muddy, and explains that she was looking for herbs for Leafpool by the border neighboring ShadowClan and fell into the stream. They leave without Ashfur. On the way to the Gathering, they see Ashfur's body lying in the WindClan stream as if he had drowned. They take him back to camp and set him for vigil. While inspecting Ashfur's body, Leafpool notices a slit in his neck, suggesting he was murdered. After the Gathering, Firestar announces that Ashfur's death was unknown and, against the other cats who think it was WindClan, suspects a cat from ThunderClan may have been the murderer, and Hollyleaf, Jayfeather, and Lionblaze see Squirrelflight looking scared and holding her breath. The three vow to keep the recent events involving them, Squirrelflight, and Ashfur a secret.

A compiled list of the errors present in Long Shadows can be found here. 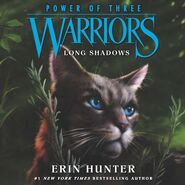 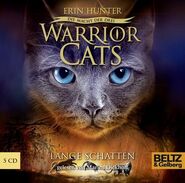 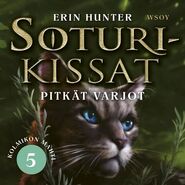