View source
This article is about Midnight, the first book in The New Prophecy arc; you may be looking for either Midnight the badger, or moonhigh, the Clan term for midnight.
Spoiler warning: Plot and/or ending details follow.

Called by StarClan to fulfill a new prophecy, Brambleclaw, Squirrelpaw, Tawnypelt, Stormfur, Feathertail, and Crowpaw set out on a long journey, knowing only that trouble threatens the forest.

Midnight is the first book in The New Prophecy arc.[6] Brambleclaw is the cat depicted in the original cover,[10] and in the reprinted cover.[11] It features Brambleclaw and Leafpaw as the main protagonists.

For Chris, Janet, and Louisa Haslum

Darkness, Air, Water, and Sky will come together... and shake the forest to its roots.

The wild cat Clans have lived in peace and harmony for many moons - but now, strange messages from their warrior ancestors speak of terrifying new prophecies and a mysterious danger.

All the signs point to young warrior Brambleclaw as the cat with the fate of the forest in his paws. But who are the other cats mentioned in the prophecy? All he knows for sure is that the strength and courage of the greatest warriors will be needed now, as the quest to save the Clans begins.

"Action packed. Certain to please any young reader who has ever wondered what dreams of grandeur may haunt the family cat."[3]

"A suspenseful adventure story that urges the reader onward."[3]

"Packed with riveting suspense, compelling new characters, and classic themes of epic fantasy, this is an adventure not to be missed for both fans of the previous six books and readers unfamiliar with the world of the warrior Clans."[6]

The next generation of cats from the Clans, Brambleclaw, Tawnypelt, Feathertail, and Stormfur are now warriors, and Firestar has had two kits with Sandstorm: Squirrelpaw and Leafpaw.

StarClan sends a prophecy revealing that the forest is in danger. Four cats, one from each Clan, are chosen to go on a journey in order to save the Clans. Brambleclaw is chosen to represent ThunderClan, Feathertail to represent RiverClan, Crowpaw to represent WindClan, and Tawnypelt to represent ShadowClan. Squirrelpaw also stubbornly joins Brambleclaw, with Stormfur joining Feathertail. Each cat is visited by their StarClan ancestors and is told to go and see what midnight has to say, although they are not told who or what "midnight" refers to. They meet at a Gathering and learn about each other's dreams, but do not know where to search for Midnight. However, after Brambleclaw has a dream about drowning in salty water and after Ravenpaw tells him that the place in his dream is real, they decide to set out for the so called sun-drown-place.

While Leafpaw and her mentor Cinderpelt are searching for herbs, StarClan sends Cinderpelt a vision of a tiger leaping forward from fire. She concludes that the warning must mean that Squirrelpaw and Brambleclaw, the daughter of Firestar and the son of Tigerstar, will represent a danger to the forest, or to each other. Cinderpelt shares the warning with Firestar, who decides to keep Brambleclaw and Squirrelpaw apart. His plan fails when Brambleclaw and Squirrelpaw meet with Feathertail, Stormfur, Tawnypelt, and Crowpaw at Fourtrees, and the cats begin their journey to the sun-drown-place. When Sandstorm points out to Firestar that the fire and tiger prophecy might have meant that Squirrelpaw and Brambleclaw could save them from trouble instead of brewing it, Firestar becomes worried, thinking he scared them away.

Soon, all leaders find out that the other Clans lost cats as well, and discuss about it on a Gathering. They are uneasy, wondering why StarClan did not send them a message, and asking if there is some new enemy in the forest hunting them down. Only Leafpaw, Squirrelpaw's sister knows about the mission StarClan gave to the cats, but does not tell about it to any other cat.

Meanwhile, the six cats continue their journey, passing Highstones, then traveling through farmland. They get separated after crossing a Thunderpath, ending up in gardens of different Twoleg nests. Brambleclaw gets chased by a very young Twoleg kit. Eventually, they find each other, and escape from some kittypets that are about to attack them. During the next days, they travel through farmland, avoiding Twoleg nests. During the journey, each of them has an illusion of tasting salty water, convincing them that they are on the right path.

When they are chased by a dog, they are rescued by an old loner who introduces himself as Purdy and later leads them into a large Twolegplace. Purdy takes the cats to a abandoned Twoleg nest for food. The same young Twoleg kit that chased Brambleclaw had been following them. The Twoleg kit picks up a startled Feathertail. Squirrelpaw and Stormfur convince the Twoleg kit to let go of her. They continue through the big Twolegplace. The young Twoleg kit continues to follows them. With Purdy guiding them they continue through the Twolegplace and are attacked by rats while passing by a dump. They manage to defeat the rats, but Tawnypelt gets an infected bite on her shoulder and limps painfully for the rest of the journey. It takes the cats three days to get out from the Twolegplace, and they enter a forest where they find shelter and prey.

Eventually, they reach the sun-drown-place and enter a cavern inhabited by a highly intelligent badger named Midnight. She eventually reveals that all Clans are in danger as the forest is about to be completely destroyed by Twolegs to construct a new Thunderpath. The six cats must lead the Clans to find a new home.

This book contains an epilogue, which is set back in the forest, where Twolegs and their tree-destroying monsters are beginning the destruction of the forest. Graystripe, walking behind Firestar, exclaims the Thunderpath smells foul. Sandstorm and Cloudtail join the two cats, as does Leafpaw, the last member of the patrol, who was examining a clump of marigold. Cloudtail snorts in disgust, complaining that every time they come there, it takes the entire day to get the smell out of his pelt. Firestar speaks up, saying that this day is unusual, as the reek of the monsters is worse than ever, but there are none. Leafpaw pricks her ears, saying she can hear something, as the wind is carrying a deep-toned roar coming toward the patrol, faint, yet growing louder.

Cloudtail turns to Firestar with a puzzled look in his eyes, asking what the sound is, as he has never heard anything like it. From a rise in the Thunderpath emerges the biggest monster any of the cats had ever seen. The roaring grows extremely loud. It moves slowly, but is being followed by more monsters, and the cats realize that the destruction of the forest had begun.

A compiled list of the errors present in Midnight can be found here. 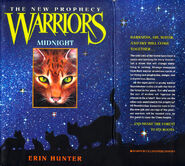 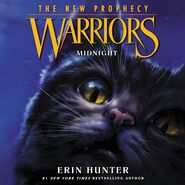 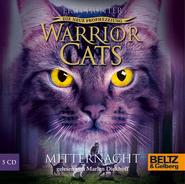 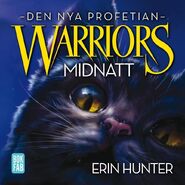 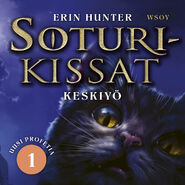