Warriors Wiki
Register
Don't have an account?
Sign In
Advertisement
in: Omen of the Stars arc, Books, Night Whispers

View source
This article is about Night Whispers, the third book in the Omen of the Stars arc; you may be looking for Nightwhisper, a ShadowClan cat.
Spoiler warning: Plot and/or ending details follow.

The deadly battle between ThunderClan and ShadowClan is finally over. However, StarClan begins to split on Clan borders, and Flametail, Jayfeather, Lionblaze, and Dovepaw soon discover that evil comes from places even StarClan can't reach...and it is closer to home than they realize.

Night Whispers is the third book in the Omen of the Stars arc.[5] Flametail is the cat depicted on the original[7] and reprinted covers.[8] It features Jayfeather, Lionblaze, Dovepaw, Ivypaw, and Flametail as the main protagonists. Yellowfang and other StarClan cats are featured in the prologue.

After the sharp-eyed Jay and the roaring Lion, peace will come on Dove's gentle wing.

Jayfeather and Lionblaze are determined to uncover the real reason that ThunderClan was led into the deadly battle with ShadowClan. Meanwhile, Dovepaw must face a startling fact and realizes that evil is sometimes no more than a whisker's length away. As tensions between the four Clans grow, one cat will make a stand for what is right—but at what price?

"Since the 2003 launch of this popular fantasy series, more than thirty "Warriors" books have been written about these feral cats—including novels, mangas, special editions, and field guides. Wonder how one woman does it all? Truth is, she doesn't. "Erin Hunter" is the pen name of series originator Vicky Holmes and collaborators Kate Cary, Cherith Baldry, and Tui Sutherland. Vicky develops all of the characters and storylines and provides them to her writers, then edits the manuscripts to ensure consistency of authorial voice and story arc. It seems an effective strategy for this authorial team, as they draw heartfelt feline characters who wrestle with remarkably human problems and concerns like family, commitment, honesty, and devotion as they struggle with clan affiliations, territorial conflicts and survival. This book is the third addition to the "Omen of the Stars" line in the "Warriors" feline fantasy series. Although the authors provide some background of the events from the previous book, readers would better start (at least) with the first "Omen of the Stars" book. Series fans will appreciate the inclusion of an adventure game at the book's end—and should be sure to check out the online game available at warriorcats.com, too. This story spotlights Jayfeather, Lionblaze and Dovepaw in their attempts to protect the clans from the evil, secretive cats of the Dark Forests."[9]

Two ShadowClan cats, Sagewhisker and Fernshade, confront Yellowfang, believing she could have stopped the deadly battle between ThunderClan and ShadowClan and perhaps prevented Russetfur from dying. Lionheart, Bluestar, Mudfur, Oakheart, and Mudclaw arrive and the eight discuss how to deal with the threat of the Dark Forest. Realizing they will have to fight, Fernshade leaves to fetch Russetfur, as she was Russetfur's mentor.

After the battle with ShadowClan over a strip of territory, Jayfeather is busy treating the injured. He speaks to Lionblaze about Russetfur's death, though the conversation quickly turns towards the Dark Forest. The brothers agree they should no longer ignore any signs. After a full day, Jayfeather rests, only to find himself in Ivypaw's dream, discovering that she and Tigerheart are receiving training from the cats in the Dark Forest.

Meanwhile, Lionblaze notices something on top of the hollow and goes with Cinderheart to investigate. The duo talk about Lionblaze's actions during the battle until they are interrupted by the discovery of a white owl. Cinderheart says she worries about him. Lionblaze confusingly asks why, to which Cinderheart answers, simply, that they are friends. Eventually they happen upon the place where Hollyleaf had vanished beneath the earth. Lionblaze is haunted by his memories of Heathertail and Hollyleaf. The two then decide to do an early border patrol, though they soon run into Flametail, who is angry with Lionblaze for killing Russetfur. He calls him a murderer, and runs off.

The next morning, Dovepaw overhears Lionblaze and Jayfeather talking about Ivypaw. She tries to slip away and find them, but is followed by Ivypaw. The two then go out with Cinderheart and Berrynose since Lionblaze is nowhere to be found. She uses her power to listen in on Lionblaze and Jayfeather and then confronts Ivypaw about her visits to the Dark Forest. Ivypaw denies what she is doing is wrong. The two fight and Ivypaw runs off, leaving Dovepaw by herself.

After finding out about Ivypaw, Lionblaze seems anxious. Jayfeather walks back to camp, while noticing that leaf-bare is coming soon. When he's back in camp, he and Millie are arguing about Briarlight. As Millie is leaving, Dovepaw walks in and informs Jayfeather that she knows about Ivypaw training in the Dark Forest. Dovepaw wants to try and stop her from going, but Jayfeather tells her to leave Ivypaw alone for now.

In ShadowClan, Flametail and Toadfoot talk about how ShadowClan is going to take back the land that was stolen from them during the battle. After he observes battle training, Flametail is called by Blackstar to speak with him in his den alongside his mentor, Littlecloud, who seems to be ill. After asking the two whether StarClan sent them a sign or not, Blackstar asks Littlecloud to go to Moonpool to share tongues with StarClan. However, since Littlecloud is ill, Flametail takes the position and goes to the Moonpool, leaving Littlecloud with the queen, Ivytail to help him. Later, Spottedleaf sends Jayfeather a dream about Ivypaw training in the Dark Forest. In the vision, Ivypaw enters the camp with the Dark Forest cats behind her. They attack ThunderClan until Ivypaw is eventually the only ThunderClan warrior still standing. She looks up at Jayfeather, her eyes black and blank. Spottedleaf tells Jayfeather there was nothing she could do.

As Ivypaw slips through the ThunderClan entrance, the whole Clan is ruffled. When Ivypaw asks why, Blossomfall responds that ShadowClan hasn't marked the new border yet. As Jayfeather stares at her from Highledge, Ivypaw wonders if he could see her. It is made known that Ivypaw is aware that Jayfeather knows about her training in the Dark Forest. She goes back to Blossomfall saying she thought it would have been an omen from StarClan. Blossomfall answers her, saying it means that ShadowClan hasn't recognized the new border. When Dovepaw asks Ivypaw if she'd help her and Leafpool fix the warriors' den, Ivypaw agrees to do it later. Cinderheart asks Ivypaw where she has been, since Dovepaw had returned some time ago. Ivypaw lies and says she's been practicing her stalking. Cinderheart assures Ivypaw she is as talented as her sister and they both share fresh-kill. Ivypaw then inquires why the Clan is not talking about the recent battle. Blossomfall answers that ThunderClan won, therefore there is no need for heavy discussion on their part. Ivypaw mumbles that they should learn how to be better at fighting to fix the mistakes they made.

As Ivypaw enters the Dark Forest, she bumps into Mapleshade. Hawkfrost tells her to leave Ivypaw alone. Ivypaw notices that Mapleshade is disappearing slowly. Ivypaw asks nervously if all cats disappear, to which Hawkfrost replies that eventually they will if they survive long enough. Ivypaw blurts out that Jayfeather and Dovepaw know she's here. Hawkfrost says she isn't doing anything wrong. Hawkfrost then introduces Ivypaw to Snowtuft, Shredtail, Sparrowfeather, and Thistleclaw. As the cats train, Sparrowfeather cheats. Thistleclaw catches her, swinging his paw at her and knocking her off her feet. He tells the cats to restart with no more cheating.

When Flametail arrives at the Moonpool, he goes to the water to drink. Flames appear from the edge of the Moonpool. There, he sees all of ShadowClan's ancestors. Sagewhisker appears and warns Flametail that a great war is coming. She asks Flametail to name all of the cats he sees. Flametail recites the cats' names and notices that only ShadowClan ancestors are present before him. Raggedstar tells him that ShadowClan must stand alone. Sagewhisker then explains StarClan has been put into the Clans they were born into. Raggedstar continues, saying that allies should not be trusted and to only trust one's own Clan and ancestors. As the cats begin to fade, Flametail notices Russetfur in that she looks younger and strong. When he comes back to ShadowClan, he tells Littlecloud and Blackstar what he saw. Littlecloud does not agree, though Blackstar does. Flametail is furious, thinking that Littlecloud is too connected to ThunderClan.

Ivypaw goes to the Dark Forest and overhears Tigerstar and Tigerheart training. Tigerstar calls ThunderClan weaklings and tells Tigerheart, "it'll be us against four Clans and their puny ancestors." Ivypaw, finally realizing Tigerstar's evil motives, flees and confesses to the Three her ongoing visits to the Dark Forest. However, the cats decide to use her visits to their advantage with the idea that she will act as a spy and report information she acquires in her dreams to Jayfeather.

Meanwhile, ShadowClan cats are venturing onto the ice of the lake. Flametail and a few other cats decide to play a game called "preystone", where a cat tries to get a stone into a dent in the shoreline guarded by another cat. Partway through, however, the ice breaks under Flametail, who begins to drown. Jayfeather, who was nearby, leaps in to save him, but the ice closes up. Jayfeather is determined to save Flametail until Rock appears and tells Jayfeather that it is Flametail's time to die, not his. Jayfeather lets go of Flametail, who drowns as a result.

Shortly afterward, Ivypaw makes a visit to the Dark Forest, now as a spy. Brokenstar decides to test her loyalty by ordering her to kill a now deceased Flametail, who is confused about no longer being in StarClan and does not know where he is. Ivypaw is baffled as she does not think a dead cat can die a second time. Brokenstar says a cat's soul does die, either slowly as he or she is forgotten, or by any blows done to him or her that would kill a living cat. Ivypaw prepares to pounce, but is stopped abruptly when Tigerheart intervenes, fiercely defending his brother. Tigerstar lets Flametail go saying that Flametail is not a threat. He believes Ivypaw will remain loyal and will fight with them when the battle comes.

A compiled list of the errors present in Night Whispers can be found here. 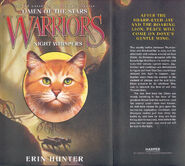 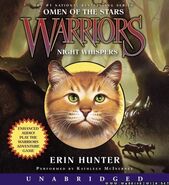 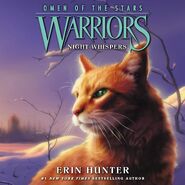 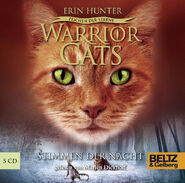 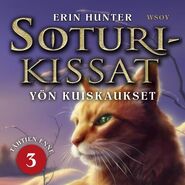