View source
watch 01:55
Cobra Kai Season 4 - The Loop
Do you like this video?
Play Sound

The Clans return to the Tribe of Rushing Water to aid them against trespassing rogues.

Eclipse
Outcast is the third book in the Power of Three arc.[5] Breezepaw is the cat featured on the reprinted cover.[6] It features Jaypaw, Lionpaw, and Hollypaw as the main protagonists. Stripes, his cats, and the Tribe are featured in the prologue.

To Jessica
Special thanks to Cherith Baldry

A secret prophecy shapes the lives of Firestar's grandchildren, but only one of the three knows about it. Jaypaw is captivated by the power it promises, and he believes the key to that power may lie buried in the distant past – with the ancient cats who once walked these woods and now prowl through his dreams.

His search for answers leads him toward the mountains – the home of the Tribe of Rushing Water. Lionpaw and Hollypaw feel drawn to the mountains too, for different reasons.

But the mountains hide secrets as well as answers, and if the three cats find a way to get there, they may discover more than they ever expected.

“Action-packed. Certain to please any young reader who has ever wondered what dreams of grandeur haunt the family cat.”[7]

Intruders invade the Tribe of Rushing Water. Crag sends Sheer to tell the Tribe that the cats are invading. The invaders and the Tribe get into a heated debate about the prey, and it turns into an attack. The prologue ends with the Tribe of Endless Hunting watching helplessly over the Tribe.

Jaypaw, Hollypaw, and Lionpaw resume their lives as normal after rescuing three WindClan kits, Sedgekit, Thistlekit, and Swallowkit from the tunnels. They were helped by Breezepaw and Heatherpaw, and each of them promised not to mention the events that happened in the tunnels.

Jaypaw and his mentor Leafpool, are at the lake on ThunderClan's territory, looking for mallow. Leafpool mentions just because they aren't on the brink of battle, doesn't mean they don't need the herb. Jaypaw is distracted, however, by the stick that connects him to Rock. Leafpool catches him with the stick and scolds him while also being mildly curious. On their way back to camp, Leafpool and Jaypaw run into Hazelpaw during her warrior assessment. She makes a big deal about the vole she caught, and Dustpelt finds her talking to Jaypaw instead of hunting, who tells her to get back to hunting. They also run into Berrypaw during his warrior assessment. He becomes angry as Jaypaw's clumsy walking ends up scaring the blackbird he had been stalking. The two have a small argument but Leafpool walks back to the clearing with Jaypaw and Brambleclaw redirects his apprentice's thoughts back to hunting.

Later that day, Berrypaw is boasting about his catch and motions with his head, a scathing comment about how Jaypaw made him miss a blackbird. Berrypaw, Hazelpaw, and Mousepaw then become warriors, named Berrynose, Hazeltail, and Mousewhisker. Brambleclaw says that they should only give warrior names to apprentices who can keep their mouths shut. Only a day or two later, Icekit and Foxkit become apprentices and their mentors are Whitewing and Squirrelflight, respectively.

Soon, ThunderClan gets visitors from the Tribe. This shocks Stormfur and Brook at first, because Talon and Night are asking them to come back. They also bring news that Jag is dead, which startles Squirrelflight. Stormfur is outraged at this request, and tells the story of how he and Brook became outcasts after prompted by Firestar. It is later revealed that Stoneteller had nothing to do with Talon and Night's arrival, and that they came of their own accord, asking the ThunderClan cats for help against rogues that were stealing prey and land from them. Hollypaw, Lionpaw, and Jaypaw each find the aspect of traveling to the mountains intriguing and they finally get their chance, when Brambleclaw and Squirrelflight take them along to the mountains, along with Tawnypelt and Crowfeather, so they could also help out. Brambleclaw says that he wants all the cats that went on the first trip to the Sun-drown-place, save for Feathertail. Breezepaw also accompanies his father, Crowfeather, much to his and his father's disdain.

On their way to the mountains, they meet Purdy, an elderly old cat who helped the Clan cats on their journey to the sun-drown-place. Breezepaw has a very foul attitude towards Purdy, because he is a kittypet and an elder. He guides them through the Twolegplace, and saves Breezepaw, Lionpaw, and Hollypaw from three dogs in a barn he previously warned them about. When they are at the end of the Twolegplace, Purdy says good-bye and leaves them.

Once there, the Clan cats are confronted by Stoneteller, who is not quite happy they came. After some persuasion, and time, Stoneteller allows the Clan cats to stay and help them deal with the intruders. They start training every Tribe cat how to fight like Clan cats, adapting some of the Tribe's hunting moves into battle moves. The Tribe cats continue not to be fond of the idea of "boundaries", constantly stating that they did not like to change ancient traditions, but go along with the training regardless.

Jaypaw once again tries to find out about the mysterious prophecy: "There will be three, kin of your kin, who hold the powers of the stars in their paws." He talks to the Tribe of Endless Hunting, but he is unable to find out anything new, much to his dismay.

In the end, the Tribe drives out the invaders, mostly thanks to Lionpaw with his fierce and impressive battle skills, who comes back from the battle covered in the rogues' blood. Hollypaw thinks it was his blood, and rushes to tell Jaypaw right away. When Jaypaw finishes examining Lionpaw, Hollypaw boasts to Jaypaw how brave Lionpaw was during the battle.

Jaypaw decides to tell Hollypaw and Lionpaw about the prophecy, knowing that it was time. He tells them to listen, because there is something he needs to tell them.

A compiled list of the errors present in Outcast can be found here. 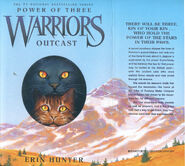 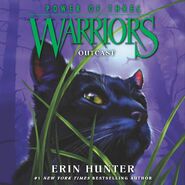 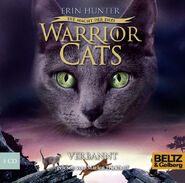 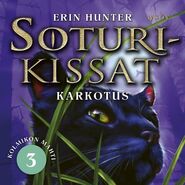