View source
watch 02:07
Spider-Man: No Way Home Trailer Dropped - The Loop
Do you like this video?
Play Sound

Patrols are organized groups, usually consisting of three or more warriors and often their apprentices (if any of the warriors happen to have one) monitoring a specific area or to carry out a specific task, such as hunting or scouting.

All Clans are expected to check and mark their boundaries daily, challenging all trespassers, as decreed by the warrior code. This is done by border patrols. Usually, Clans patrol their borders two times a day: at dawn and at sunset,[1] unless more are needed due to danger or threats such as rogues, foxes, or badgers.[2]

In the opening chapter, Tigerclaw and his patrol consisting of Ravenpaw, Mousefur, and Redtail are marking the border at Sunningrocks. A patrol of RiverClan cats, led by their deputy, Oakheart, attack them. The ThunderClan cats are outnumbered and after a fierce battle they are forced to flee. Mousefur and Ravenpaw receive serious injuries and RiverClan now controls Sunningrocks for a short period of time.[3]

A few days after, a ThunderClan patrol confronts a new RiverClan patrol, and succeed in reclaiming Sunningrocks.[4] Oakheart and Redtail die in the battle, and Tigerclaw claims that he killed Oakheart after the other cat killed Redtail. However, later it turns out that Oakheart died when a rockslide crushed him,[5] while Redtail was murdered by Tigerclaw,[6] who expected to become deputy.

There are many hunting patrols in this book. The first one is seen when the patrol, including Stormtail, comes back to camp. Bluefur also leads her first hunting patrol, but during it, Thistlepaw scents a dog and battles it solo, earning his warrior name, Thistleclaw. Later, a patrol from ShadowClan is seen hunting in ThunderClan territory, but Bluefur and Snowfur chase them off, with Snowfur dying in the process.

Warriors can be assigned the task to find a missing cat (for instance, a kit or apprentice who wandered away from the camp, like Squirrelpaw in Midnight or Berrykit in Sunset) or to look for information (such as searching for Sol in Sunrise).

When Squirrelpaw and Brambleclaw disappear, the Clan is frantic and sends out many search patrols to retrieve them each day. But soon, it is impossible to find them and they give up, believing that the two might have ran away to ShadowClan or been taken by a fox.

Warriors, apprentices, and sometimes medicine cats can be assigned on a journey patrol, normally to interact with other groups like the Tribe of Rushing Water (in Outcast) or The Sisters (in Darkness Within).

If a message or question to another Clan is too urgent to wait until the next Gathering, a party can be appointed to bring it to the other Clan's leader. Usually only a few warriors are sent, so they would not be mistaken for a raiding party. They wait at the border until a border patrol from the rival Clan comes to escort them to the camp to speak with their leader.

After RiverClan finds out that ThunderClan had Silverstream's kits, a message patrol, consisting of Leopardfur, Mistyfoot, Stonefur, and Blackclaw come to claim that the kits belong to RiverClan. When Bluestar refuses, they come back again, later, and Graystripe ends up going to RiverClan with his kits.

Water patrols are made up of warriors who carry water to the cats staying in the camp (such as queens and elders) during a drought, when the water needs to be fetched from a large distance away. They use bundles of moss to carry it. The concept appeared in Rising Storm and also in The Fourth Apprentice.

When the ThunderClan camp catches on fire, patrols are sent to gather water to put it out, but they fail, so they take shelter in the RiverClan camp, with Crookedstar's permission.

A hunting patrol in Into the Woods

A border patrol in Into the Woods

A border patrol confronting trespassers in A Shadow in RiverClan

A hunting patrol in A Shadow in RiverClan

A patrol in A Shadow in RiverClan

A hunting patrol in Ravenpaw's Path

A hunting patrol in Winds of Change 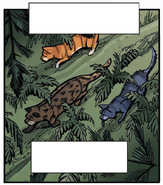 A patrol in Winds of Change

A hunting patrol in Hawkwing's Journey

A patrol in Crowfeather's Trial 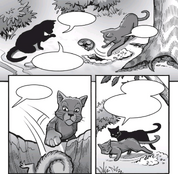 A hunting patrol in Crowfeather's Trial

A hunting patrol in Looking for Newleaf
End of spoiler warning