What is the fate of the lost Clan warrior's kits?

Pebbleshine's Kits is the sixteenth novella attributed by HarperCollins.[3] It features Pebbleshine as the main protagonist.

What happened to Pebbleshine after she was lost on SkyClan's journey to the lake?

Where did Tree earn his name - and his ability to speak to the ghosts of the dead?

How did Mothwing find her path as a medicine cat, without believing in StarClan?

Discover more untold stories from the warrior Clans in these three thrilling novellas!

Pebbleshine is hunting, hunger driving her forward despite her fatigue. Knowing her Clanmates are going to give up on prey, she freezes at the right of a Thunderpath. Twoleg monsters are there, but she becomes can scent prey. It's risky, but they are hungry, and she thinks that it will be worth it. Waspwhisker, Hawkwing, Curlypaw and Blossomheart are follow the scent to the monster with the prey. Waspwhisker confirms that they are chickens, and Hawkwing and Curlypaw keep watch as the three cats attempt to catch what they thought would be easy prey. Pebbleshine plays around with the bars, trying to find a way to open the cages containing the chickens. She tries to use a twig to lever it open, but Twolegs appear and Hawkwing yowls a warning to her. Pebbleshine finally catches a bird, but it is too late and she is trapped as the monster begins to drive off.

Hawkwing jumps frantically after the monster but fails to land on it, and begins running after the monster. Pebbleshine yowls that she will come back. The queen thinks of the her kits' future. As she eats the chicken, exhaustion wins her over, and she falls asleep. Pebbleshine wakes to find that the monster has stopped and prepares to run. She cautiously jumps down, looking for landmarks, but she fails to find any. She realizes that she is far, far away from her Clanmates. A barn in the distance reminds her of Barley's farm, and she sets out to reach it. She hopes that the cats there will know where the lake or SkyClan is, but knows that there's a small chance that they will. The sun has fallen by the time she reaches the barn. Pebbleshine skirts the trees and is alarmed by a dog. She meets Bug, who stops the dog, named Bunny, and she is invited into the barn.

Bug reassures her that Bunny is harmless, and after Pebbleshine's agreement, she lets Bunny free, and the dog lollops off into the trees. As Pebbleshine slips into the barn, the scent of mice overwhealms her, and she makes the easiest catch she has ever made. Pebbleshine asks Bug is she knows about a big monster camp, or SkyClan, even the other Clans, but is discouraged when the barn cat knows nothing of them. She is desperate, but curls up on a hay nest, and spirals into sleep.

Pebbleshine wakes to see Bug and Bunny fighting. Pebbleshine prepares to fight, but realizes that they are play-fighting and loosens up her muscles. Accepting Bug's offer, the she-cats hunt together, driving the prey out and dispatching two mice. After Pebbleshine declares that she is leaving, the black she-cat is concerned after her health, but they part with sadness. A monster zooms by with incredible speed, and finally, Pebbleshine realizes that she will need another lift to get back to her Clan.

Pebbleshine continues her journey, and is thankful for her hard pads and strong muscles. It is raining, and she reminds herself of Plumwillow, noting that the two she-cats must have strength. Twoleg dens appear in the distance, and she pads on, finding all the monsters asleep. She leaps lightly on a monster that is facing the direction she wants to go, and panics as Twolegs climb into it. The monster roars to life, and silently pleads for the Twolegs to let her out. The monster heads the opposite way, and the Twoleg kit coughs repeatedly. The monster stops, and Pebbleshine is first spotted by the female. The male reaches toward her, but she bolts, and finds herself standing outside a Twoleg nest.

She sits to think, noting how many days have passed and mulling over how far she is from her Clanmates. Pebbleshine whips around to a hiss, seeing a fluffy gray kittypet advancing. She fruitlessly tries to make peace and ends up stalking toward the coward, who steps back. A black-and-white she-cat and an orange tom fend her off, and when they ask Pebbleshine where her Twoleg nest is, Pebbleshine explains to them that she is a Clan cat, and they don't live with housefolk. Milo leads her to a stream, and Pebbleshine asks them if they know of a large monster camp. The two kittypets exclaim that they knew a place like that, and decide to lead her there.

Olive and Milo go to their Twolegs to eat, and briefly cuddle with them, but soon return. The way there is along the road, and as they walk, and the young cats roll around, lifting Pebbleshine's spirits. Pebbleshine informs them of her Clan, and why they are travelling, additionally talking of her mate, Hawkwing. Olive is sympathetic and asks her if she'd like to live with Twolegs, to which Pebbleshine gently declines. Milo alerts them that they are there, and Pebbleshine races to the camp, only to find that it is not the same one. The kittypets seem shamed as they apologize. The queen waves it away, noting that it is not their fault and comforting them. She hunts a squirrel and encourages them to eat it, but is surprised to find that they don't enjoy it. The next day, she tells them that she is leaving. The kittypets pad off reluctantly, and as Pebbleshine thinks of her Clan, she realizes her chances of finding them are are next to nothing.

About a moon has passed, and Pebbleshinie creeps up on a pigeon. She climbs a tree, noting the weight of her kits. The pigeon flies off, but Pebbleshine leaps after it, and the roof they collide with breaks, sending the queen crashing to the ground. Shocked, she immediately checks for signs of life in her belly, and upon finding them, thanks StarClan. She tries to break the door, jump up into the window hole, and smash a patch of clearstone with a crack in it, but her attempts are fruitless. The den is full of dust and spider webs. Discouraged, she finds herself alone and falls asleep.

She opens her eyes in a dream to find Hawkwing affectionately licking her. Pebbleshine twines her tail with his and purrs so hard, she doesn't think she could ever stop. Pebbleshine looks around and sees Leafstar, Waspwhisker, Echosong, Tinycloud and more. Pebbleshine tells him her deepest fears, but her mate soothes her by meowing to keep calm, have faith in StarClan, and to walk toward the setting sun and come back to him. He also says that their kits have important destinies. She wakes, disappointed to find herself alone again. Pebbleshine surveys the room, determined to escape. Spotting a long stick, she uses it to her advantage, propping it onto the window and jumping on the end until the glass shattered. She dashes outside, triumphant that she did it, and determined to find her Clan again.

Pebbleshine hauls herself up onto a hill and rests, reflecing on how she had met Tree, who saved her life and who would've made a good Clan cat. Her belly is huge, and she wishes that a medicine cat was with her to tell her how the kits are, and when they would be born. An icy scent drifts toward her. She believes that it is StarClan, who promised to stand by her always, and jumps to her feet, heading toward the water. She stops when she scents prey and catches a mouse. After eating it, she sets off again, but stumbles because of a shooting pain in her belly. The pains continue, becoming closer and closer until Pebbleshine knows she has to find a place quickly to kit. She finds a tunnel underneath a Thunderpath, and although she doubts it's safety, she lies down in the tunnel to wait for the kits.

The kits don't come and Pebbleshine despairs, but a pale yellow tom appears and gives her a stick to bite into. He gently orders her to push hard. She wonders who the tom is, and sees a frosty glimmer and notes that he is a StarClan cat. Another contraction comes, and Pebbleshine thinks her belly will burst open. A little she-cat slips out, followed by a black-and-white kit. Pebbleshine curls around them, her heart full of love, and finds that the yellow tom has vanished.

Pebbleshine licks her two daughters gently, thinking that they are beautiful. She silently promises to introduce them to the Clans someday. She then goes outside to hunt. She kills and devours a shrew quickly. She then finds a badger and freezes, hoping it is just passing through. But it's not, and with a wail from the kits, the badger tears at the brackens protecting them. Pebbleshine leads the badger onto the Thunderpath, but is hit and rescued by a Twoleg. However, she dies and finds herself in StarClan. The yellow tom is bending over Pebbleshine, introducing himself as SkyClan's first medicine cat. He is followed by a ginger-and-white tom, Billystorm. Pebbleshine recognizes her mentor and is delighted, only to discover that she is dead.

Other Clanmates are there to welcome her into StarClan. Her joy evaporates into anxiety for her kits. Voicing her worries, Micah leads her to a pool. Blinking into it, she sees a ginger tom and a silver-gray she-cat. Knowing they are Clan cats, Micah tells her that they will find her kits, and reveals there is a way to go back into that world. She would be a observer, and nobody would know nor sense her prescence. Pebbleshine immediately agrees, and while the medicine cat warns her of the dangers, she still decides to go. She asks what she should do.

They brush muzzles, and her dead Clanmates cheer her, calling good-byes. Pebbleshine slides into the cold waters of the pool, and after swimming through an exit, finds herself in the living world. The two cats halt near her, and the ginger tom meows that he thought Sandstorm didn't mean a literal different path. Pebbleshine is excited at the aspect of a warrior name, and directs images of her kits toward the gray she-cat. The cats go into the tunnel, and upon finding her kits, ask for their mother. However, as Pebbleshine is dead, the mother is not to be found and the tom calls for his Clanmate to get food for the kits. She pads toward them, and curls around the precious kits.

Pebbleshine can picture Hawkwing searching or waiting for her, and in the past, Pebbleshine had believed that she and Hawkwing would be together until they were old, watching over their growing kits. That dream is impossible now, but she could still always watch over her kits. Pebbleshine had made her own path since the chicken incident, and now she believes that she is on the right path. Pebbleshine whispers softly to her kits that she will always be with them, no matter what happens. 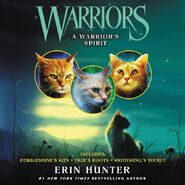 Retrieved from "https://warriors.fandom.com/wiki/Pebbleshine%27s_Kits?oldid=1565996"
Community content is available under CC-BY-SA unless otherwise noted.