Warriors Wiki
Register
Don't have an account?
Sign In
Advertisement
in: Books, Field Guides, Secrets of the Clans
English

Secrets of the Clans

Secrets of the Clans

Thunder, Wind, River, Shadow and Star: the Clans -- Territories: homes and hunting grounds -- Cats outside the Clans: Kittypets, Rogues, and others -- Other animals: animals to hunt, fight, fear, and respect -- The Warrior Code: the principles a warrior must live by -- Ceremonies: how a warrior becomes a leader -- Prophecies and omens: foretelling the future -- Medicine: healing the Clans -- Mythology: LionClan, TigerClan, LeopardClan.

Secrets of the Clans is the first book in the Field Guides, revealing many secrets about the world the Clan cats have inhabited.

Special thanks to
Tui Sutherland

For Cyd, because she loves cats, and for Rebekah,
because I'm sure she will, too.

Look within to find:

And many more truths about the secrets, beliefs, and family lives of the cats of the Clans.

HERE THE SECRETS CAN BE REVEALED...

Explore the warrior Clan camps with an insiders-only tour guided by a warrior cat. Find out the secrets of how an apprentice learns to fight, hunt and live by the warrior code. Understand the lore of the healing herbs passed down from one medicine cat to another. Discover the never-before-revealed myths, legends, and mystical origins of the warrior Clans.

At last, an in-depth exploration of the world of the warriors.

Read on: ThunderClan, WindClan, RiverClan, and ShadowClan welcome you to their territories.

"A great idea: Warriors Field Guide serves as an authoritative illustrated companion book to Erin Hunter's mega-popular feline series. This carefully planned hardcover contains full-color art, useful fold-out maps, and a glossary; but series fans will also be drawn to the detailed text, which covers the various clans, their history, the characteristics, and their locales."[5]

Though it has no real plot, Secrets of the Clans contains a lot of information from different points of view that is not revealed in the main series books. This begins with a story of how the Clans were founded, introducing Thunder, Shadow, Wind, and River as the first leaders of the four Clans. This is followed by a chapter on the warrior code - the rules of the Clans.

Information is given by Clan including tours of all eight camps - old and new, each guided by a warrior of the Clan and lists of significant medicine cats and leaders. For ThunderClan, Brightheart tells her story of her and Swiftpaw's encounter with the dogs. The story of how WindClan were driven out by Brokenstar and the rest of ShadowClan is also told, along with an account of the flood in RiverClan during which Fireheart and Graystripe rescued Mistyfoot's kits, and Leopardstar speaks on the alliance of her Clan with Tigerstar to form TigerClan. Yellowfang tells her story for ShadowClan, talking of her forbidden love and its consequences. Lionheart shows the reader around StarClan territory and then Snowfur tells the story of Mosskit's death.

There are two full maps of the Clans' territory, both The forest territories and The lake territories. Fourtrees, Highstones, the Moonpool and the Island are all explored and different cats give accounts of these landmarks. The sun-drown-place is also described and Tawnypelt tells of her first impressions of it.

The various ceremonies of the Clans are explained and cats give stories of their experiences. Fighting techniques, medicine descriptions and herbs, ancient myths about the three Great Clans that once roamed the forest, information about cats outside of Clans including BloodClan and the Tribe of Rushing Water, and short stories told by secondary characters are also included in this accompaniment to the main series books. Follow Clan cats through a special tour just for the reader, including naming ceremonies, important places, and an inside scoop into the Warriors world.

Many aspects of this book are not compatible with the rest of the series. The creation of the Warrior Code in this novel is mentioned to have happened in a single generation, the code having been written by the first four leaders of the Clans.[6] However, in Code of the Clans, the Warrior Code is established over many generations, new rules being made when they were needed.[7] SkyClan and its leader, Sky are absent from this edition.[8] Thunder, River, Wind, and Shadow are also mentioned as having taken on the suffix -star,[9] when it is established later that the tradition of taking on such a name wasn't adopted by the first leaders of the Clans.[10] However, this is also incorrect, as the leaders do take the suffix of -star in Moth Flight's Vision.[11]

For a list of all mistakes regarding this book, check here. 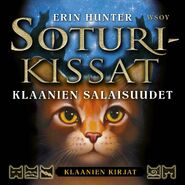