As an apprentice, Spotpaw learns that a warrior's duty is loyalty to her Clan and the warrior code. However, when ThunderClan's leader begins acting strangely, Spotfur realizes she must break the code in order to save her Clan.

Spotfur's Rebellion is the twentieth novella attributed by HarperCollins.[4]

A young warrior's choice to defy her leader for the good of all five Clans.

Looking for a shorter overview? Find one here! As a young apprentice, Spotpaw wants nothing more than to have fun and to befriend the older apprentice Stempaw. She tries to impress him by being "brave" and joking around, but is scolded by her mentor Leafshade, who says that the Clan needs loyal warriors, not a rebel.

She and Stempaw decide to spy on a training session between Bumblestripe and his apprentice, Stempaw's littermate Shellpaw. Spotpaw gets the idea to pounce on Bumblestripe when he's not expecting it, and the two of them get in trouble. Their mentors decide that they're a bad influence on each other and that they need to be punished separately. After a talk with her parents about following the warrior code, Spotpaw vows to be the best apprentice that she can be.

A moon later, the camp floods, and Spotpaw helps get Flipkit to safety after he gets separated from his family. Stempaw is impressed, and Spotpaw, thinking how good it feels to be next to Stempaw, starts to wonder if they'll be mates someday.

Not long after she's received her warrior name, it's a bitterly cold leaf-bare and StarClan has gone silent. The apprentice Thriftpaw gets into trouble and is sent out to find more of the herbs she'd messed up, but gets lost in the snow until Spotfur's patrol finds her. Spotfur and Stemleaf discuss the fact that it was too dangerous for her to be sent out like that alone, and together they talk to Bramblestar, who agrees and makes a rule to keep the apprentices safe for the rest of leaf-bare. Stemleaf comments that they work well together. After Bristlefrost confesses her feelings to Stemleaf, he privately tells Spotfur what had happened, and explains that he has only ever felt that way about one cat: Spotfur.

Bramblestar falls ill, and the whole Clan worries about what will happen. In the midst of this uncertainty, Stemleaf and Spotfur decide to make it official between them. At first it seems like the treatment for Bramblestar didn't work, and they hold a vigil, but at the end of it he awakens, and Spotfur is relieved.

Bramblestar behaves erratically after coming back from losing a life, punishing cats for the smallest things - like Spotfur not being allowed to talk to anyone for a quarter moon because she'd accidentally crossed the border. Spotfur and Stemleaf know that something's not right, and they try to convince their Clanmates to stand up against his behavior.

Little by little, they get other cats to listen, and they set up a secret meeting for cats of all the Clans to discuss it. There, Tree explains to them that the cat currently in Bramblestar's body isn’t actually Bramblestar. They get Squirrelflight to try to convince the other Clans about the impostor, but only Tigerstar of ShadowClan is willing to stand with them.

Finally, Stemleaf decides that it's time to act: they have to defy Squirrelflight and try to kill the impostor. Stemleaf is killed by the impostor in the battle, and Spotfur is horrified and grief-stricken, but she knows that for Stemleaf's sake she has to run away to continue the fight later. Squirrelflight vows that no matter what, she will always fight for ThunderClan. This inspires Spotfur, and despite having lost Stemleaf, she resolves to do the same. 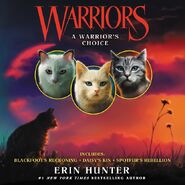