As the Clans settle into their new homes, civil conflict begins to stir in WindClan.

Winds of Change, The Rescue, Beyond the Code

Starlight is the fourth book in The New Prophecy arc.[5] Mistyfoot is the cat depicted on the reprinted covers.[7] It features Leafpaw and Brambleclaw as the main protagonists. Bluestar and other StarClan members are featured in the prologue.

Before there is peace, blood will spill blood...

The Clans have finally arrived in their new home, and now they must establish territories and learn the hidden dangers of this unfamiliar world. Most importantly, they must find a replacement for the Moonstone–a place to communicate with StarClan. But more than one cat harbours ominous plans, and as the warriors wait for a sign, some of them begin to realize that the threats they face in the forest may not be as perilous as the threats they face from within...

"Action-packed. Certain to please any young reader who has ever wondered what dreams of grandeur may haunt the family cat."[3]

"Erin Hunter's fourth book in the series is the most compelling one so far. The Cat Clans are struggling to establish territories in a world where dangers and resources are yet to be found. Having been forced to leave due to two-leggeds destruction of their world, unexpected alliances were forged between the Clans as they journeyed to an unfamiliar land. Creating new boundaries for the Clans challenges those temporary alliances. It is of utmost importance to reconnect with the StarClan, the warrior ancestors whose guidance oversees the selection of new leaders, medicine cat secrets, and faith that they're following the correct path. There's a healthy dose of feline personification, complete with moral and emotional struggles urging the story along. Personal jealousies and passions seem natural in this reading by Nanette Savard. Her subtle voice changes have sufficient dramatic effect to help listeners identify which cat is speaking. For cat lovers and fans of the series, this is a fine rendition."

"A suspenseful adventure story that urges readers onward."
-ALA Booklist

The cats of StarClan gather around and discuss how they walk in new skies, but worries still haunt the Clan. As they gather, a new prophecy is revealed: Before there is peace, blood will spill blood, and the lake will run red.

The cats have just discovered the lake as their new home. The four Clans temporarily set up a camp by the lakeshore and decide that the next day they will sort out territories and a Gathering place. During a meeting, Firestar calls up Squirrelpaw and gives her the warrior name Squirrelflight, becoming the first cat to receive a warrior name by the lake and acknowledging StarClan's presence. The next day, the leaders call upon the four remaining cats that went on the journey - Brambleclaw, Squirrelflight, Crowfeather, and Tawnypelt - as well as Mistyfoot of RiverClan to explore all around the lake and find territories and a camp for each Clan. They depart on this new journey around the lake.

The cats come across a spot that seems ideal for RiverClan, but Brambleclaw thinks it could be good ThunderClan territory too. Continuing on, they find a coniferous forest which seems to suit ShadowClan, although they find two kittypets and get involved in a fight. Desperate to prove herself by finding ThunderClan a camp, Squirrelflight runs ahead and accidentally falls down a large circular stone hollow. She recovers quickly and then realizes that it would be a perfect place for the ThunderClan camp. Brambleclaw, however, seems reluctant, but they keep it in mind. The cats later cross a moorland which Crowfeather thinks would suit WindClan. The five cats return and announce their findings to all of the other cats. They plan to leave the next day.

That night, while every other cat is sleeping, Barkface, the WindClan medicine cat, goes to Firestar and tells him that Tallstar is dying. Firestar asks Brambleclaw to follow him, as well as Onewhisker, at Tallstar's request. Tallstar tells them that he does not wish for a cat like his deputy, Mudclaw, to lead WindClan, and wishes to replace him with Onewhisker as deputy. He performs the ceremony, but without using the traditional words. Shortly afterward, Tallstar dies, leaving a stunned Onewhisker. The next morning, Firestar and Onewhisker announce this to the other Clans, much to Mudclaw's fury. Onewhisker appoints Ashfoot as his deputy, although he has not yet received his lives and name. The medicine cats worry if there is another Moonstone here for Onewhisker to do so.

After settling into the new camp, Mousefur falls ill. Leafpaw realizes that Mothwing had given the elders water from a small pool by the lakeshore before the Clans split up again, and the water was contaminated by a dead rabbit. The cats recover after quick care from the medicine cats. However, Leafpaw goes to WindClan and tries to cure Morningflower with watermint, as the elder is seriously ill.

At the full moon, the Clans meet back by the lakeshore for the Gathering. It is cut short by foxes which attack; some warriors fight them off and there are no injuries, but the cats take this as a sign that this should not be the Gathering spot. Later, Mothwing confesses to Leafpaw that she feels she isn't cut out to be a medicine cat, and that she doesn't even believe in StarClan, which takes Leafpaw by astonishment.

During Gatherings and times when the Clans are together, Brambleclaw has been spending more time with his brother Hawkfrost, which doesn't sit well with Squirrelflight. Brambleclaw has his first dream in which he meets Tigerstar and Hawkfrost. Tigerstar praises the two of them for their courage with this ordeal and tells him that he has great plans for them. There is also much tension erupting in WindClan which seems to be divided in two: Mudclaw's supporters and Onewhisker's supporters. ThunderClan fears trouble is coming from this.

One night, Spottedleaf comes to Leafpaw in a dream and tells her to follow her. Sorreltail accompanies Leafpaw, and the two of them go far up on ThunderClan's territory near the border with WindClan. Spottedleaf takes Leafpaw to her destination: a pool of water which reflects the stars and moonlight. Leafpaw sees all of the cats of StarClan there including Bluestar, Feathertail, Lionheart, and all of the cats that died of hunger during the famine in the old forest. Bluestar tells her that this place, the Moonpool, is where medicine cats will come to share tongues with StarClan. She goes back to tell Cinderpelt, and the two of them tell all of the other medicine cats. Later, during the half moon, Leafpaw receives her full medicine cat name, Leafpool.

The next day, Mistyfoot rushes into ThunderClan and says that Mudclaw and Hawkfrost have been meeting at night. She then says that Hawkfrost and a patrol went out at dawn that day and hadn't returned, and she suspects they've gone to attack Onewhisker's followers in WindClan. Firestar assembles a patrol to accompany him to fight, and sure enough, a battle has started on WindClan territory.

Leafpool is left behind with a couple other ThunderClan warriors in the camp. Two ShadowClan warriors invade and Leafpool is nearly killed, almost falling into the hollow when they run into her, but Crowfeather comes to her rescue, just before she is about to fall. He proclaims his love for her, and so does she, not aware of her feelings until now.

Brambleclaw ends up pursuing Mudclaw and Hawkfrost, and fights Mudclaw. Mudclaw has the advantage over Brambleclaw until Hawkfrost saves him. Mudclaw claims that he and Hawkfrost had an agreement: Mudclaw would take over and make Hawkfrost deputy, despite he being RiverClan. Hawkfrost denies this. Just then, lightning strikes a tree, crushing Mudclaw and making a bridge to an island, which was earlier mentioned as a possible Gathering spot. All cats gather around and celebrate Onewhisker's victory, and he says he will go and receive his leader name and nine lives as soon as possible. In the final scene, Squirrelflight sees Brambleclaw talking with Hawkfrost, and she walks away from him in disgust, ending their friendship.

A compiled list of the errors present in Starlight can be found here. 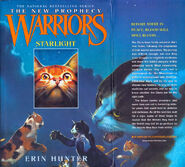 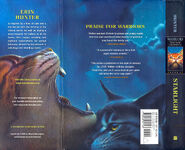 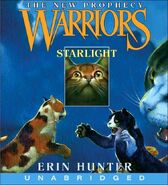 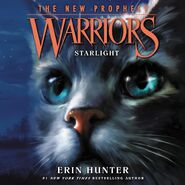 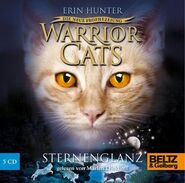 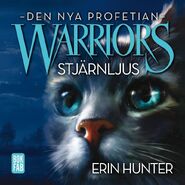 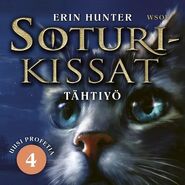