Amidst ongoing strife within and between the Clans of warrior cats, Brambleclaw is tempted by the dark plans of his father and brother, and the meaning of Leafpool's ominous visions become clear.

Sunset is the sixth book of The New Prophecy arc.[5] Hawkfrost is the cat depicted in the center of the original cover, with Leafpool looking down in her vision at the starry paw prints of her sister, Squirrelflight, and Brambleclaw, destined to be mates.[9] Firestar is the cat depicted on the reprinted cover.[10] It features Leafpool and Brambleclaw as the main protagonists, and Darkstripe in the prologue.

To Rod Ritchie,
who first figured out what really goes on beyond the garden fence...

Before there is peace, blood will spill blood, and the lake will run red...

As shadows of the past continue to haunt the forest, Brambleclaw is haunted by a dark figure on a dangerous quest for revenge, and must struggle to remain true to his Clan. A sinister path is unfolding and the time is coming for certain warriors to make the choices that will determine their destiny... and the destiny of all the Clans.

"Action-packed. Certain to please any young reader who has ever wondered what dreams of grandeur may haunt the family cat."[3]

"In the sixth book in the popular Warriors: The New Prophecy series, evil lurks in the form of Firestar’s dead enemy, Tigerstar. He walks in the dark place, plotting Firestar's death and the assumption of power by his own sons. One of Tigerstar's sons is Brambleclaw, now Firestar’s good friend; the other is Hawkfrost, who shares his father’s hatred. Will Brambleclaw turn on his friend? As series fans will expect, the action here proves as compelling as the relationships between cats and the dynamics among the Clans."

"A suspensful adventure story that urges readers onward."
-ALA Booklist

Text from the book jacket

"Every book is heart-stopping!"

"I can't believe how amazing these books are. Right from the one series into another--the excitement just keeps going!"

"I just can't wait for the next one!"

"These are amazing books! It feels like you're right there inside with Brambleclaw and the others! Brambleclaw, you will make a great deputy! I can't wait for him to become leader!"

"I like Warrior Cats! I play the games on warriorcats.com!"

"I think all of the Warrior Cat books are awesome and just can't wait for the next!"

"This is the best book series in the world! I don't know what I would be reading if I hadn't read 'Into the Wild'! NEVER stop writing Erin Hunter! :0)"

Brambleclaw and Squirrelflight's fight is over. Their love for each other has become stronger than before, but Brambleclaw must choose once and for all if he will follow in his father's pawsteps or reject the power that Tigerstar promises and concentrate on being a loyal warrior in ThunderClan.

Tigerstar continues to visit Hawkfrost and Brambleclaw in their dreams. Tawnypelt, their sister, has also visited the Dark Forest, although she firmly rejects Tigerstar's offer of power. Tawnypelt says that she wants to earn power and respect by being a loyal warrior and serving ShadowClan the best that she can.

In addition, it seems that something has happened in the Tribe of Rushing Water. Stormfur and Brook are unwilling to return to the Tribe and do not say why. Stormfur and Brook go back to RiverClan, but Hawkfrost has them thrown out of the Clan. After taunting Stormfur on to attack him, which he does, Leopardstar exiles Stormfur for his disregard for the warrior code. Brook leaves RiverClan with him. Brambleclaw, who witnessed the exile, takes Stormfur and Brook back to ThunderClan, and Firestar lets them stay as long as they want. Firestar doesn't get all the support he wants from his Clanmates, but having Graystripe's son in the Clan, Firestar is not as devastated about his capture.

After moons of waiting and persuasion from Brambleclaw and Sandstorm, Firestar admits to himself that Graystripe isn’t going to return. When the Clan begins to challenge the weary leader for accepting cats that do not belong to ThunderClan, referencing Daisy, her kits, Stormfur, and Brook. Firestar appoints a new deputy, Brambleclaw. The decision is first met with objection, because Brambleclaw had never mentored an apprentice. The matter is soon cleared when Firestar declares that his new deputy will mentor Berrykit when he comes of age.

As for Cinderpelt, all of the Clans are grieving for her. Leafpool finds herself struggling between grief and betrayal, for she has not seen Cinderpelt in the ranks of StarClan. During a visit to the Moonpool, Spottedleaf comes to Leafpool in a dream and shows her that Cinderpelt has been reborn in the form of Cinderkit, a fluffy gray she-kit, who is one of Sorreltail's four kits.

Leafpool also realizes that after overhearing a fight between Mothwing and Hawkfrost, and then receiving a vision from Spottedleaf, that had Hawkfrost planted the moth's wing outside of Mudfur's den back in the forest, the sign which made Mothwing a medicine cat apprentice, so he could use Mothwing to become leader.

Fox traps have also been discovered in the forest, and cats are warned to avoid and also spring them if they see any. Two known victims of the traps are Berrykit, who loses part of his tail as a result of getting it caught, and Firestar.

With that, the prophecy "Before there is peace, blood will spill blood and the lake will run red" is fulfilled. Leafpool realizes this when she and Squirrelflight reach Firestar and Brambleclaw, after following Ashfur's fear-scent to the lake. Brambleclaw and Hawkfrost are half-brothers, thus they share the same blood and are kin, and as he stumbles down to the lake, blood pours from Hawkfrost's neck, turning the waves red. 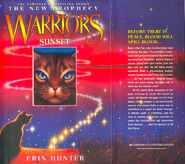 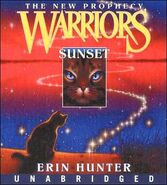 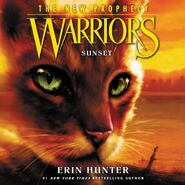 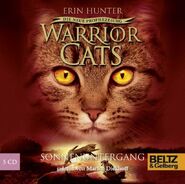 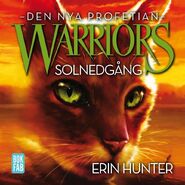 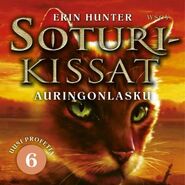