Start a Wiki
This article is about a non-canon aspect of the Warriors world.

The Deluge is an official short scenario for the Warriors Adventure Game. This scenario takes place three moons following the previous adventure, The Plaintive Howls, and providing the players' characters completed the last adventure it is stated that they are three moons older than whichever adventure that had been played previously.

The game is played by at least two players, guided by a Narrator. The recommended or maximum number of players is not known. Players need one character sheet each, and the Narrator needs the printed version of the scenario description.

Each player assumes the role of a cat character, newly made young warriors, having a set of attributes created according to the rules and guidelines of the game. The cats may be either from the same Clan, or different Clans.

The adventure takes place in the Lake Territories.

StarClan has sent dreams to each player's cat explaining that because of the terrible excess of rain and scarcity of prey, they need to hunt farther into the forest. On the trip, they find two sets of tracks: fox and rabbit. They make a See check and then decide which to follow.

The cats become lost and find themselves back in the same place they started. They may decide to try and follow the set of tracks they started with, follow the other set if they haven't done so, or return home with whatever they have caught.

Some of the cats are caught in the flash flood when the pond collapses. If a cat is in the water, they must make a Swim Check to get their head above water. Any cat on dry land can try to pull out another cat from the water one at a time in three different rounds by using a Swat Check.

The cats follow the rabbit tracks to a large meadow filled with rabbits. They stay to hunt and try to catch some rabbits; if it is the second time they do this, the rabbits' awareness is sharpened and the cats must hunt in pairs. The ground is soft and muddy, which adds difficulty to the hunt. The cats use the Sneak and Pounce Checks in this adventure.

Talking to the Shadows

When talking with the ShadowClan patrol that finds the group of cats in the territory, the group must try to convince the ShadowClan cats of the danger of the moment. A player's cat can make a Listen Check and may hear a sound that reveals that the pools are collapsing and a flash flood is on the way.

If the cats fail to catch any rabbits, they may try to catch the rabbits in a second attempt or investigate the second set of tracks.

When following the second set of tracks, the cats find a vixen, or female fox. They have to decide whether to try and scare her, walk away, or to fight. The fox is trying to lead the cats away from her den and pups, and does not attempt to fight them.

The cats succeed in catching some of the rabbits and can decide on whether to return to the second set of tracks they found or go back home with their fresh-kill. As Clan cats, they cannot eat their catch until the Clan has been fed.

A flash flood occurs in ShadowClan territory. The group of cats can either help the ShadowClan warriors, or leave them because they were being so suspicious of the group when they crossed over the border.

The pond that had earlier collapsed did damage, but it did not collapse on any area that the Clans frequented. The cats continue on and find three ponds like the previous one. A Ponder Check determines if they figure out these ponds are directly above ShadowClan territory and threaten its camp. The cats can decide either to warn ShadowClan directly or go to the Clan leaders.

The cats are following the second set of tracks and are having difficulty in keeping on the right trail. They may or may not be able to keep the correct trail and may get lost.

Gone in a Flash

The cats may have missed the danger signs of the flash flood; there is suddenly a great wall of water rushing down on them. They may or may not get out of the way in time; cats can perform a Jump Check to try and avoid the water. Cats caught in the water can be rescued during five rounds or they are knocked out.

The cats enter ShadowClan territory to warn them of the imminent danger. A patrol of ShadowClan warriors led by Ratscar finds them and challenges them. The group can choose either to deliver the message or begin fighting.

The group of cats decide to attack the ShadowClan patrol challenging them. The pools above collapse during the battle; the cats may be knocked out by the fight, continue fighting until the flood hits them, or stop fighting and warn ShadowClan of the danger.

The Clans spend some time in ShadowClan territory, helping them recover from the flash flood. Few cats were hurt and no one was killed, thanks to the players' cats. Blackstar even gives a statement of thanks to them. The adventure is over, and the group completed the mission.

The group of cats fail to help ShadowClan in the flash flood, either because they were not deeply involved enough, or that they chose to ignore ShadowClan because of a bias against them. It is said that a number of ShadowClan cats are killed and many are injured in the tragedy. The adventure is over, and the group failed. 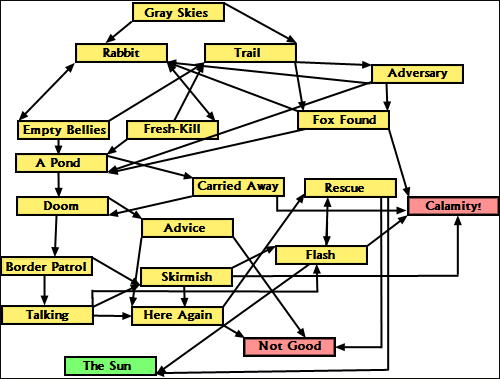 The adventure can be replayed any number of times, but a character may get points only once.

Retrieved from "https://warriors.fandom.com/wiki/The_Deluge?oldid=1397481"
Community content is available under CC-BY-SA unless otherwise noted.