Warriors Wiki
Register
Don't have an account?
Sign In
Advertisement
in: Omen of the Stars arc, The Forgotten Warrior, Books

As a full-scale battle against the Dark Forest moves closer, tensions between the warrior Clans reach a breaking point. Suddenly, a stranger appears in ThunderClan's midst, spinning a web of deceit and pitting the warriors against each other so that no cat can tell who to trust.

The end of the stars draws near. Three must become four to battle the darkness that lasts forever....

With a divided StarClan driving a treacherous rift between the four warrior Clans, the spirits of the Dark Forest are gaining strength. Ivypool's role as a spy becomes more dangerous with each passing day. Dovewing is haunted by nightmares about the mountains and finds herself paralyzed by fear of what lies ahead.

Then an outsider appears in ThunderClan's midst, spreading discord and pushing the Clans farther apart. As tensions mount and Clanmates turn against one another, the warrior cats will be forced to choose whose word they can trust - before it's too late.

"The end of the stars draws near. Three must become four to battle the darkness that last forever." The fissures between the warrior Clans have become almost irreparable, but they grow even deeper with the arrival of an outsider. With questions of trust and treachery festering everywhere, the warrior cats clench their teeth and hope desperately for safe passage." [9]

The prologue starts as a mysterious, unnamed cat is traveling, apparently heading for the lake. A tom who lives in the area confronts the traveler and initially threatens the mysterious cat to leave his territory. However, the tom grows curious as the traveler begins to explain and eventually the tom questions the traveler. As they talk, the tom grows less hostile and asks if the traveler is lost, to which the voyager answers with amusement and answers in the negative. The traveler then leaves the tom and heads for the lake, thinking of plans of vengeance.

As Birchfall and Ivypool are heading towards the old fox den to collect some fox dung to keep rabbits away from marigold, Birchfall abruptly tells Ivypool that he saw her in the Dark Forest, revealing that he is training with them as well, which shocks Ivypool. He tells her it's only training to make them better warriors, indicating he doesn't understand what is to come. They go to the WindClan border to wash their paws in the stream, where they get into an argument with Heathertail and her apprentice Furzepaw, and Breezepelt with his apprentice Boulderpaw. The Dark Forest cats start to take sides with Ivypool and Birchfall, and Birchfall acts with more aggression then usual, until a ThunderClan patrol consisting of Sorreltail, Bumblestripe, Hazeltail, and Berrynose intervene and bring Ivypool and Birchfall back to ThunderClan camp.

Meanwhile, Dovewing is collecting moss with Whitewing, and they discuss Bumblestripe's affection for her, as Whitewing notices the two, much to Dovewing's embarrassment. Tigerheart tells Dovewing that Dawnpelt thinks Jayfeather has murdered Flametail by drowning him and is planning revenge.

Later, Cherrykit and Molekit are apprenticed to Rosepetal and Foxleap. They have a run in with a fox, and a mysterious cat saves them. Jayfeather questions them what the cat looks like, searching Molepaw's memory, but they say that didn't see the rescuer clearly. Lionblaze then figures out that the wandering cat turns out to be Sol. Sol is welcomed by the Clan, but not trusted by the senior warriors. The Clan begins to wonder if Sol is the cat who saved Cherrypaw and Molepaw and Sol does not deny the claim. Poppyfrost and Berrynose respect him and tells him that he is always welcome.

Sol disappears at a time and Dovewing and Ivypool set out in search of him to find out that he betrayed ThunderClan by telling WindClan their whereabouts. As Dovewing and Ivypool listen, Owlwhisker begins to sense the presence of intruders. In their panicked rush, Dovewing and Ivypool happen upon a stranger who introduces herself as Hollyleaf. They are awe-stricken, but Hollyleaf says there isn't enough time for questions. Hollyleaf leads the two young warriors back to camp, but before she can get away, Lionblaze finds her and brings her back to the Clan. Once back in ThunderClan, Hollyleaf begins to recount the truth about Ashfur's death. Before Hollyleaf can confess to the killing, Brambleclaw interrupts her and says he was there at the event, although Hollyleaf hadn't seen him. Brambleclaw continues to describe how Ashfur had been the one to leap at Hollyleaf. While they fought, Ashfur slipped and fell into the water – Hollyleaf was only acting in self-defense. The Clan also finds out it wasn't Sol who saved Poppyfrost's kits – it was Hollyleaf.

Yellowfang comes in a dream with Jayfeather and angrily demands for him to tell Cinderheart who she really is. Jayfeather, unsure, talks to Leafpool about the situation. Leafpool immediately objects, because Spottedleaf came to her in a dream saying they should keep quiet in order for Cinderheart to be the warrior she wants to be and do what she couldn't do when she was Cinderpelt.

Ivypool wakes up to find herself in the Dark Forest. Hollowflight rushes up to her to tell her that there is a meeting happening in the Dark Forest. Ivypool and Hollowflight show up at the meeting and Ivypool notices Blossomfall and Birchfall. The meeting takes place at the heap of fallen trees where Ivypool fought Antpelt. After the meeting, Ivypool demands that the Dark Forest make her a warrior. They tell her if she can beat Antpelt, she will become a warrior. Antpelt and Ivypool undergo a rigorous battle. In the end, Antpelt is defeated when Ivypool manages to slice him from throat to tail, and he fades away. Brokenstar promptly declares Ivypool a warrior. Breezepelt gets furious with Ivypool for killing Antpelt and threatens her.

Jayfeather speaks with Cinderheart about who she wants to be. She says she wants to be with Lionblaze, but she feels she cannot be his mate because of the prophecy. Jayfeather explains that StarClan gave Cinderheart a second life to give her the chance of being a warrior, a mate and a mother – all the things she couldn't have as Cinderpelt.

At a Gathering, Dawnpelt and Tigerheart accuse Jayfeather of murdering Flametail. None of the leaders agree with the accusation, although Mistystar and Onestar suggest Jayfeather should be suspended from medicine cat duties until he can prove his innocence. The other medicine cats agree. A thunderstorm erupts, signifying StarClan's disapproval, and the Clans leave immediately.

WindClan attacks through the tunnels, but ThunderClan is prepared and defeats WindClan. Hollyleaf and Dovewing go after Sol, and Dovewing notices that Sol hasn't got a single scratch on his pelt, indicating he is not lifting a claw to help WindClan. Hollyleaf confronts Sol, who reveals that many seasons ago, he met another Clan in a gorge far away, most likely SkyClan. They did not accept him to be one of their warriors, revealing his motive for wanting to destroy the Clans. Hollyleaf easily defeats Sol, but lets him go, saying they have to let the warrior code rule their hearts. Sol runs off, vowing revenge. Dovewing questions Hollyleaf's reason for letting Sol escape and she replies saying that there would be no honor in killing him. The book ends as Hollyleaf, Ivypool and Dovewing are leaving the tunnels to go home.

A compiled list of the errors present in The Forgotten Warrior can be found here. 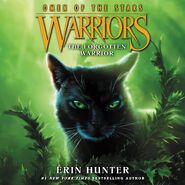 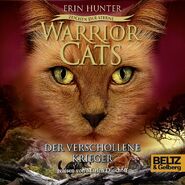