Warriors Wiki
Register
Don't have an account?
Sign In
Advertisement
in: Omen of the Stars arc, Books, The Fourth Apprentice

When the Clans suffer from a drought, one new apprentice realizes that she possesses mystical skills unmatched by any other cat and must use her power to help save the Clans.

Fading Echoes, Mistystar's Omen
The Fourth Apprentice is the first book in the Omen of the Stars arc.[5] Dovepaw is the cat depicted in the center of the original cover,[7] and on the reprinted cover.[8] It features Jayfeather, Lionblaze and Dovepaw as the main protagonists. Yellowfang and other StarClan cats are featured in the prologue.

Jayfeather and Lionblaze are prophesied to be two of the three cats who hold the power of the stars in their paws. Now they must wait for a sign from StarClan to tell them which of their Clanmates will complete the prophecy. Soon, a StarClan warrior will visit a new ThunderClan apprentice - and the lives of the three chosen cats will be forever linked.

After the sharp-eyed Jay and the roaring Lion, peace will come...

Four warrior Clans have shared the land around the lake as equals for many moons. But a prophecy foretells that three ThunderClan cats will hold the power of the stars in their paws. Jayfeather and Lionblaze know that they are two of the cats in the prophecy. Now the brothers must wait for a sign from StarClan to discover the identity of the third cat.

Meanwhile, Dovekit and Ivykit — kin of the great leader Firestar — are poised to become ThunderClan apprentices. Soon one sister will have an ominous dream—and will begin to realize that she possesses mystical skills unmatched by any other cat.

In the midst of a cruel season that threatens the lives of all four warrior Clans, bonds will be forged, promises made, and three young cats will start to unravel the secrets that bind them together.

"Fans of the ongoing Warriors series will enjoy this first volume in the Omen of the Stars subset. Cats Jayfeather and Lionblaze are grieving for Hollyleaf and are uncertain of the identity of the third cat with the power of the stars. All of the Clans are suffering from the heat and drought. When Lionblaze discovers his apprentice Dovepaw can see events happening far-off, he organizes a patrol to investigate a vision about the river. Dovepaw is a reluctant heroine, furious about her powers and new responsibilities. The perilous journey creates powerful bonds between the Clans, but ancient grievances portend new battles."[9]

The Clans are at a Gathering. A drought has dried the river and the stream running through ThunderClan territory. Cats are starving and dying of thirst; during the Gathering, Lionblaze notes that RiverClan is especially unstable. Leopardstar accused the other Clans of stealing fish in the lake, and insists that the lake belongs to RiverClan, announcing that she will send out RiverClan patrols to make sure other Clans do not fish. The other Clans are outraged by this plan, but Firestar concedes in order to prevent a battle.

Dovekit and Ivykit later become apprentices, with Lionblaze as Dovepaw's mentor and Cinderheart as Ivypaw's, and they go on a patrol to collect water for the Clan. On the way, Dovepaw expresses some of her powers by noting how she sees and hears cats from all the way across the lake. Spiderleg and Berrynose end up stuck in mud, but are soon rescued by Thornclaw, who unwittingly uses Jayfeather's stick to do so. Jayfeather gets very angry when he catches Thornclaw using it. Dovepaw suggests that the stick is medicine cat stuff, and Ivypaw simply asks what would happen if the medicine cat got "bees in his brain."

When Ivypaw examines a dead fish nearby, a RiverClan cat, Rainstorm, charges after her, believing she is planning to eat the fish, and sinks into a deep mud hole. The patrol rescues him and invites him into their camp to clean up and regain enough strength to return to his own territory. Meanwhile, Dovepaw receives a dream from Yellowfang, ThunderClan's old medicine cat, and is told of a prophecy: After the sharp-eyed jay and the roaring lion, peace will come on dove's gentle wing. Dovepaw, however, soon forgets this dream. Later, Dovepaw speaks of seeing brown animals up the river building a dam out when she was in the forest, though no other cat believes her. Lionblaze and Jayfeather speak to her, informing her that she is the third cat of the prophecy. Dovepaw does not take this revelation well.

Lionblaze creates a plan to travel up the stream and find a way to unclog it and bring the water back, a journey that would include a patrol from each Clan, and Firestar agrees. All four Clans end up joining the journey, although Leopardstar is hesitant, and has to be urged by Mistyfoot, her deputy. Lionblaze and Dovepaw are chosen for the trip, and meet up with Toadfoot and Tigerheart of ShadowClan, Whitetail and Sedgewhisker of WindClan, and Rippletail and Petalfur of RiverClan. Ivypaw is immediately envious of her sister's participation the journey, and is visibly irritable after returning to the camp. The patrol begins their journey and are shortly afterwards chased back into ThunderClan territory after encountering Twolegs. They set off again, traveling up the quiet stream bed until Dovepaw scents dogs, and they struggle to escape from them. Later on, they encounter a pen of rabbits owned by a couple of Twolegs, but before they can eat them, three kittypets named Seville, Jigsaw, and Snowdrop confront them. They eventually elect to leave the rabbits be, and travel up to the beavers' dam. The cats, after first finding the dam, meet a loner named Woody, who seems to refuse to help them, though later on gives in. They plan and launch an attack on the beavers, but the beavers gain the upper hand, badly wounding the cats and killing Rippletail.

Meanwhile, at the ThunderClan camp, Jayfeather meets up with Breezepelt. The WindClan warrior threatens him, feeling angered and betrayed by Leafpool and Crowfeather's erstwhile affair, but he does not attack. Poppyfrost, pregnant with Berrynose's kits, becomes worried that Berrynose does not love her as he is insistent that she stay in the nursery. She disappears into the mountain and Jayfeather follows her to the Moonpool, scenting Breezepelt following her too, though the WindClan tom disappears again. Jayfeather attempts to comfort Poppyfrost, but is interrupted when Breezepelt shows himself again, this time to attack Jayfeather and to kill Poppyfrost to make him suffer. Breezepelt and an unknown tom attack Jayfeather, but Honeyfern comes to Jayfeather's help and chases them off. She tells Jayfeather that she is proud of Poppyfrost and Berrynose, and that Berrynose truly does love Poppyfrost, he was only terrified of losing her. Then Yellowfang appears, and he is also told there will be a war between StarClan and the Dark Forest.

Shortly afterwards, Jayfeather goes down to the lake and asks Rock if he knew about him, Lionblaze, and Hollyleaf not being Squirrelflight and Brambleclaw's kits. Rock tells him that he had known all along. Jayfeather is anguished and furious by this, but Rock says that it had to be that way, and it wasn't his place to tell him. Jayfeather snaps at him, saying that he thought Rock was his friend. Rock's reply to him is that he is no cat's friend, for he knows too much to have any real friendships. He goes on to say that Jayfeather should be glad that he is not like he is: cursed to live forever, knowing what has happened and what is going to happen; but being unable to change it. Jayfeather, feeling betrayed, breaks the stick.

Back at the dam, the patrol creates a plan to use two cats to distract the beavers while the rest of them dismantle the dam, but it is pointed out that the patrol would be too small to complete the task. Lionblaze and Dovepaw set out to find Seville, Jigsaw, and Snowdrop, the cats they met earlier, and try to convince them to help them with their mission. The kittypets agree but express some uncertainty after Dovepaw warns them of the danger. They put the plan into action after practicing with dismantling logs, enforcing it at night during a rainstorm. Whitetail, Sedgewhisker, and Woody distract the beavers, and they begin. After a while, Dovepaw hears the beavers retreating back to the stream, and just in time, the cats manage to completely collapse the dam, but are swallowed away with the river during the process.

Dovepaw spots Tigerheart struggling, and saves him with the help of Petalfur, who states she will not let another cat die on this journey. The cats make it far down the stream and reunite, heading back to the camp. They are praised by their fellow warriors and say their farewells to each other, and Dovepaw is disappointed they were to be apart from now on. Ivypaw welcomes Dovepaw back into camp, her mood brightening, along with the rest of ThunderClan. Dovepaw and Ivypaw, unable to sleep, walk down to the lake. Dovepaw steps on something sharp: the fragments of Jayfeather's stick. Poppyfrost gives birth to her kits, and Jayfeather sees Tigerstar, Hawkfrost, and the unknown cat (Brokenstar) he had fought at Breezepelt's ambush watching them.

Jayfeather then tells Lionblaze about Breezepelt's attack on him, and Lionblaze confesses that he had secret training sessions with Tigerstar. Jayfeather also tells that there will be a battle between StarClan and the Dark Forest, and all Clans must participate.

A compiled list of the errors present in The Fourth Apprentice can be found here. 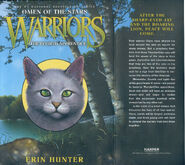 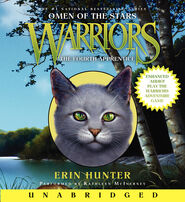 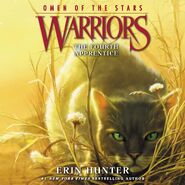 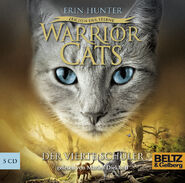 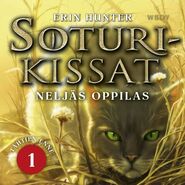