A print compilation of Hollyleaf's Story, Mistystar's Omen, and Cloudstar's Journey, this book shows stories that give insight to events in the series that were not covered during the main arcs, showing these events from the eyes of cats who experienced them first-hand.

The Untold Stories is a compilation of the first three novellas.[3] It features Hollyleaf, Mistystar, and Cloudstar as the main protagonists of their respective novellas.

Which cat saved Hollyleaf after she raced into the collapsing tunnels?

Why did Mistystar threaten to force Mothwing to step down as RiverClan's medicine cat?

How did Cloudstar try to save SkyClan as Twolegs were encroaching on it's territory?

Discover the secrets behind some of the most mysterious Warriors moments in these three thrilling tales - together in print for the first time!

In Hollyleaf's Story, when Hollyleaf disappeared in the tunnels by the Lake, ThunderClan believed she was gone forever. But her adventure was only beginning... Lost and lonely, Hollyleaf soon meets a mysterious cat named Fallen Leaves, who teaches her how to live in the tunnels. Hollyleaf tries to be happy, but she can't help wondering if leaving her Clanmates was the right choice. Hollyleaf knows she's a ThunderClan cat at heart, but can she ever truly go back?

In Mistystar's Omen, there is a devastating challenge for the new leader of RiverClan... In this original Warriors novella, when Leopardstar loses her ninth life, her longtime deputy, Mistyfoot, steps up to receive her new name — Mistystar — and lead her Clan through a troublesome time. But Mistystar is about to discover a shocking secret about RiverClan, and her leadership is plunged into crisis as soon as it begins.

In Cloudstar's Journey, Cloudstar, leader of SkyClan, has watched over his Clanmates at the edge of the forest for many long seasons. But Twolegs are encroaching on SkyClan's land and SkyClan is in danger of being driven away. Cloudstar is forced to turn to the other Clans for help—but will they be willing to come to SkyClan's rescue? 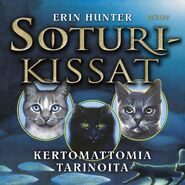