Home of the Clans

This article refers to the territories around the lake. If you were looking for information on the lake itself, please view the lake.

The lake territories[1] (also referred to as "The New Territories") is the region that provides the shelter for the four Clans in the last three books of The New Prophecy arc,[2] and all books whose action takes place after these, except for the Dawn of the Clans arc.[3]

The region is far northwest from the forest and north of the sun-drown-place. It consists of varied landscape surrounding a lake. The northern half is covered by woodland and it gives home to ShadowClan and ThunderClan.[4] The southern half is moorland, giving home to RiverClan and WindClan.[5] Two smaller streams flow into the lake from the north, and a river, named River Alba[6] flows out of it.

There is noticeable Twoleg activity in the region. Twolegs come here mostly in greenleaf and there are two Greenleaf Twolegplaces in the region,[7] and several halfbridges (boat docks) around the lake.[8] The ShadowClan territory contains a Twoleg nest called Sanctuary Cottage by Twolegs.[9]

Before the Clan cats came, the lake territories gave home to different Tribes of cats[10], named The Ancients by the Clans. They had a hierarchy similar to that of the Clans, and they used the Moonpool to communicate with their ancestors. The Ancients scattered well before the Clans ventured to the lake; one of the Ancient Tribes are the ancestors of the Tribe of Rushing Water, the group of cats that live in the mountains.[11]

The Clans settled in the lake territories after being driven out of the forest territories by Twolegs. The Clans found the Lake after StarClan sent them a sign of a falling star. They divided the land between the Clans, giving each Clan the land that best suited their purposes, ShadowClan in the pine forests, RiverClan near creeks and marshes, ThunderClan in the leafy forest, and WindClan on the moor. Leafpaw discovered the Moonpool, the place where the cats share with StarClan, and the cats started using the island in the lake, that was found by Mothwing, for Gatherings.[12]

The map above and below, while canonical and used within each Warriors book, is not entirely consistent with the regions presented in the books.

ThunderClan claims the northeastern part; their territory is mainly deciduous woodland.[13] Their camp is an abandoned Twoleg quarry, called the stone hollow by the cats.[14]

Landmarks in the ThunderClan territory:

ShadowClan claims the northwestern part; their territory is mostly coniferous forest with not much undergrowth and damp ground. The ShadowClan camp is in a dip surrounded by brambles.

Landmarks in the ShadowClan territory:

RiverClan lives in the southwestern part, around the rivers. The RiverClan Lake Camp is on a triangle of land between two streams. The Gathering Island can be reached from RiverClan territory.

Landmarks in the RiverClan territory:

WindClan territory is open moor in the southeastern part of the territory. The WindClan Camp is a shallow scoop in the ground, protected from the weather and enemies.

Landmarks in the WindClan territory:

SkyClan lives in between ShadowClan on the left, and ThunderClan on the right. Their camp is situated farther north than the other Clan camps, being between the abandoned Twoleg nest and the greenleaf Twolegplace; between the ancient oak, and the clearing. It is a little closer to the lake than the clearing, and has some trees.

The Lake is a large body of water that touches all the Clans' territories,[21] and it is the Clans' main source of water. Twolegs sail around the lake in boats. The Lake does not belong to any Clan (although RiverClan once claimed it), and cats can travel near the shore if they keep within three tail-lengths from the water.[22] It contains the Island, where the Clans hold their Gatherings each moon.[12]

The Moonpool is located far northeast from the Clan territories, and it is neutral territory as well. It is a small pool located at the bottom of a hollow, and on one side there is a steep cliff with water flowing out of it and it pours into the pool.[23] This is where medicine cats speak with their ancestors and where the leaders go to consult with StarClan and to gain their nine lives.[24]

The Horseplace is the biggest Twoleg establishment near the lake. It is a farm where Twolegs live and keep horses and cows.[25] The barn cats Smoky and Coriander live there.[26] Daisy and her kits used to live there,[27] and Floss and a dog named Pip also lived there before their deaths.[28] Daisy has now revisited the horseplace to help with Smoky's kits.[29]The Horseplace separates RiverClan's territory from WindClan's.[30] 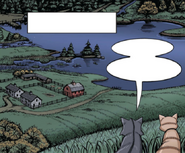 The lake territories in Graystripe's Adventure

The lake territories in Winds of Change

The halfbridge in Winds of Change

The island in Graystripe's Adventure

The island in Winds of Change

The island in Winds of Change
End of spoiler warning