After the Clans settle into their new homes, the harmony they once had disappears as the Clans start fighting each other, until one day badgers invade ThunderClan's camp.

The Lost Warrior, After the Flood

Twilight is the fifth book in The New Prophecy arc.[5] Crowfeather is the cat depicted in the center of the original cover.[7] Leafpool is the cat depicted on the reprinted cover.[8] It features Squirrelflight and Leafpool as the main protagonists, and Bluestar and other StarClan members in the prologue.

Before there is peace, blood will spill blood and the lake will run red...

New territory brings new troubles for the fierce cats of the warrior Clans. Dangers they have never faced before are lurking in the twilight shadows, and former allies are acting strangely hostile.

As divisions between the Clans grow deeper, Firestar's daughters face troubling decisions. The choices they make now could affect ThunderClan for generations to come... and with an unexpected enemy preparing to attack, their courage and strength will be needed more than ever if the Clan is to survive.

"Action-packed. Certain to please any young reader who was ever wondered what dreams of grandeur may haunt the family cat."[3]

"An eventful installment to the Warriors: The New Prophecy series."[9]

An unidentified cat is talking to a former ThunderClan leader, Bluestar. The two are discussing the cat's upcoming death. The cat is saddened by the news, and asks Bluestar how much time there is to live. Bluestar doesn't know, but says that she will join her ancestors soon, and the prologue ends with the cat looking down at the pool. This cat is later shown to be Cinderpelt.

Squirrelflight and Brambleclaw continue to quarrel about Squirrelflight's mistrust of Brambleclaw's half-brother, Hawkfrost, and she realizes that their friendship is over. Squirrelflight is also growing much closer to Ashfur, who has been recently showing romantic feelings for her. Hostilities grow not only between the cats, but also between the Clans. When a ThunderClan patrol visits WindClan to learn if Onestar has received his nine lives, the WindClan cats act strangely hostile, despite ThunderClan helping them before.

The Clans are struggling to get familiar with their new territories, uncovering its secrets and dangers and encountering enemies such as badgers and foxes. A patrol meets a badger and her cubs and chase them out from the Clan territory; while Squirrelflight and Ashfur are later attacked by a fox, and it is up to Brambleclaw to save them both. Meanwhile, ShadowClan has trouble with some hostile kittypets on their territory, and it falls to a ThunderClan patrol to help them devise a plan to stop the kittypets from attacking Clan cats.

ThunderClan accepts new cats in their ranks: Daisy, a loner from the Horseplace, and her three kits, Mousekit, Berrykit, and Hazelkit. Because her mate is spending so much time with Daisy, Brightheart gets jealous of her, and because she feels this way, she takes to helping Cinderpelt. Despite several cats objecting, it is eventually decided the horseplace cats can stay.

Leafpool helps out her friend Mothwing several times, and visits RiverClan frequently to help her out, such as when several of the Clan cats get poisoned by a Twoleg substance. She finds out about Brambleclaw meeting Tigerstar in his dreams and accepting his training and advice. Meanwhile, she deals with her forbidden love with Crowfeather, slipping out several times to secretly meet him, and struggles with her feelings as she must choose between her heart and her Clan. Eventually, Leafpool and Crowfeather decide to run away together, but after hearing from Midnight that ThunderClan has been attacked by badgers, they decide to return to help.

During the fight with the badgers, who want to take revenge on the Clans for driving them out, several cats are wounded and Cinderpelt dies while protecting Sorreltail, who is kitting. ThunderClan is saved by WindClan warriors, who heard about the attack from Midnight and came to help. Sootfur is killed in the badger attack.

Squirrelflight and Brambleclaw had somewhat settled their previous arguments, because the badger attack opened up their eyes to what they really need from each other. Stormfur and Brook arrive and help the Clan, though why they returned is revealed in Outcast.

A compiled list of the errors present in Twilight can be found here. 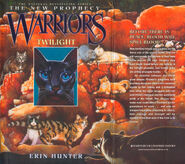 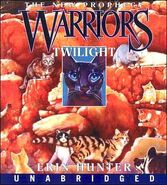 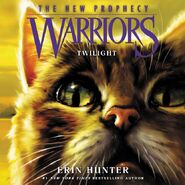 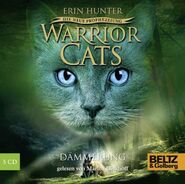 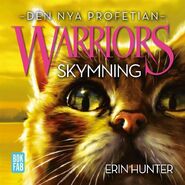 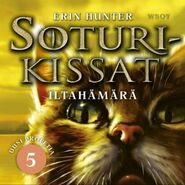