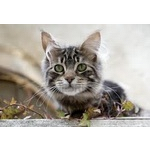 Hello! I'm called Beestripe and I'm the deputy of ThunderClan! Do you want me to how you the elder's den? Oka-- wait, don't step on the moss! The apprentices have been out all morning looking for moss. Anyway, let me tell you a bit about myself. I really wasn't born in ThunderClan, but I was born in BloodClan, a Clan of vicious, blood-thirsty cats. I was called Bee. I'm glad I left. I saw things that my father, Scourge, did. I used to admire him, but now I think he's nothing but a blood-thirsty lump of fur.====

When I first came to ThunderClan, I was about the age of an apprentice. I met the ThunderClan patrol and they tried chasing me away, but I fought all four of them off, giving Darkstripe terrible wounds (no need to brag or anything, but well, with Scourge being my father, I was third most-respected and just as tough as Bone). They were surprised at my strength and asked me where I came from. I told them about BloodClan and what they do, and why I left. Bluestar and Redtail both agreed that I should come to the Clan because they were lacking strong warriors. However, Tigerclaw and Darkstripe disagreed. Fox-hearts. They took me to the camp anyway, and Bluestar stood on the Highrock, addressing her Clan. I recieved snarls and growls at the other cats, but once Bluestar told them everything I had told her, and how the whole patrol was beaten, the glares and growls were replaced with eyes wide with fear. Then, as they grew used to me, they treated me the same way as any other cat.

A few things about me

Retrieved from "https://warriors.fandom.com/wiki/User:Beestripe?oldid=821681"
Community content is available under CC-BY-SA unless otherwise noted.