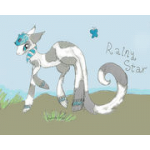 Hi! Call me Diamond. I've been into Warriors for a while now - let's call it an almost-year. I was talking with my friend and she was explaining it to me. My first version of a "kit" was terrible, as I had no idea what one was supposed to be. Here, let me show you visually:

Before Reading the Books 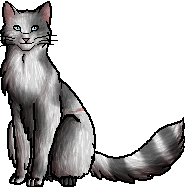 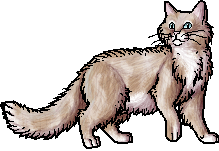 As you can see, I had a lot of characters I was ecstatic to see in the Warriors Wiki Charart. In order, the characters are

Rainystar is the leader of MoonClan (in it StarClan is called Serenity, by the way, because why not), Tawnystep is the Shaman (medicine cat), and Wildheart's a warrior. Destiny is a loner/rogue cat with a Clanner for a sister, Blueheart, although she thinks that she died and got lost. Fadestep ran away from the Clans as Fadekit, got trained by a rogue, and took the name Fade, although she calls herself Fadestep in honor of her Clan. To passing strangers, she's Echo. Waterlily is based off my cat IRL, and the early settler image is because it might be my favorite blank...*squee* Anyway, she's sort of a loner/rogue - she'll defend territory from some intruders, but sometimes lets it slide.

In a dream with StarClan, ThunderClan medicine cat Wrensplash is talking to dead Poolsong, her sister.

Wrensplash: Sister, times are troubling for ThunderClan. We are thirsty from the fire that the Twolegs caused.

Poolsong: Yeah, yeah, yeah. I know. We grew up together. And I, like, watch you, so I know. No need for formalness. Anywho, watch out for an omen! Or something! Wake up!

Before Wrensplash can say more, her eyes open. She sighs, before preparing to leave. Her apprentice, Branchpaw, looks over at her.

Back at ThunderClan, two days later, Wrensplash is out looking for herbs. She notices a leaf dangling from the tip of a tree. It breaks, falling slowly. She watches it, before noticing a hole in the ground. She looks in, gasping in surprise as she realizes there's water. The leaf lands.

Unknown StarClan member: *eerily* From the tip of the tree, the leaf shall fall, but they will find the pool that will save the Clan.

There's a cough, before a hiss.

Wrensplash hurriedly goes to tell the Clan. She bursts into camp.

Wrensplash: EVERYONE! I just received a prophecy omen thing!

Wrensplash takes in a deep breath.

Wrensplash: I just received a prophecy! From the tip of the tree, the leaf shall fall, but they will find the pool that will save the Clan.

Robinbranch: Saved? From the drought?

She smiles wickedly as an idea comes to mind.

Robinbranch: And I know just what to do...

Robinbranch has just given birth to two kits. She smiles at them, cooing.

Robinbranch: You shall be Leafkit, in honor of the prophecy you were obviously born to fulfill. It makes sense - I am Waspstar's daughter.

She turns to her other kit, this one a pale blue-gray.

Oakclaw: My sister just died! Oh. He blinks at the kits. You had them?

Robinbranch: What? She pulls the kit towards herself. She looks nothing like a leopard!

Oakclaw: You named her without me?

Robinbranch: *hesitant* ...fine. He can be Leopardkit. She won't even look at her son as she says so. Oakclaw rolls his eyes before stepping outside.

Ebonyfang looks up. Her black belly is swollen - she's just behind Robinbranch.

Ebonyfang: Oh no she didn't! She pauses. Two can play this game, though.

Now Ebonyfang has taken Robinbranch's position. She grins at her three kits.

Wrensplash: ThunderClan will be saved! We have the Tree, the Leaf, and the Pool!

Retrieved from "https://warriors.fandom.com/wiki/User:DiamondKittyHero?oldid=1224564"
Community content is available under CC-BY-SA unless otherwise noted.