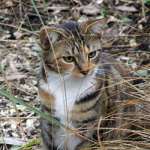 I am Echoheart, but you can call me Echo or Echoes.  I am a tortiseshell and white she-cat with ginger paws, a white tail, and green eyes.  I have a slightly bent tail, and a v-shaped scratch down my right ear. I am a RiverClan cat and I love water, but absolutely hate fish.  Wierd isn't it? I was trained to be a medicine cat but became a warrior because it was all too much work to remember all of the herbs and cures!  So now I am Echoheart, warrior of RiverClan.  But if RiverClan desprately needed it I would become medicine cat.

Thanks to Nightfall for the image of Echoheart!

Age: To you unknown

Another website I'm on other than this one is

We could take in more members so feel free to join!

It was a day like no other. The wind was strong, the trees were shaking to their roots. Echokit opened her eyes for the first time right as thunder boomed and lightning flashed. Echokit was getting up onto her tiny ginger paws and, "Hi! I'm Flowerkit! Do you want to play?" a cream colored she-cat with blue eyes and dark cream paws mewed to her. It's so nice to see and hear, Echokit thought. "Do you know where my mom, my brother, and my sister are?" Echokit tried to act calm, but the storm was getting to her. "Yea! They're in the other side of the nursery. Well get me if you ever want to play!" Flowerkit then bounded away to her mother, Breezemist, and Echokit went to greet her's.

I'll continue it later, but please comment about it on my talk page!

if you want me to make you a charart, fill out this form ON MY TALK PAGE.

If you think there should be any additions to this, post it on my talk page.

Favorite Book Other than a Warrior Book: Diary of a Wimpy Kid

Favorite Series Other than Warriors: Percy Jackson and the Olympians

Favorite Animal Other than Cats: Giraffes

These are not in any kind of order in any way.

Mistystar- I have no idea why but she's also awesome!

Bluestar- She is like the most prettiest cat ever!

Briarlight- I feel so sorry for her!

Retrieved from "https://warriors.fandom.com/wiki/User:Echoheart?oldid=791694"
Community content is available under CC-BY-SA unless otherwise noted.