I'm not dead yet!

Echomist is a beautiful silver tabby she-cat with large, startlingly green eyes. She is a queen of MapleClan. She used to belong to WaterfallClan, but after that Clan was wiped out, she came to live in MapleClan, and they welcomed her. Echomist has a very outgoing and likable personality, and because of this, she is very popular amongst her Clan. Her mate is named Blackfire, and they had three kits together (recently made apprentices), Shadowpaw, Silverpaw, and Fawnpaw.

Brightsparrow - Gray-brown she-cat with a mixture of white and black stripes on her back and tail.

Peacesong - Grayish-white she-cat with one emerald green eye, one piercing blue eye, a sweeping plume of a tail, and long whiskers.

Here are all of my siggies. Please do not copy.

Colors: (I'm only writing them here so that I don't forget them)

If you would like me to make you Charart, please paste this information on my talk page:

Here are the cats I made for PCA that have been approved in the 24-hour stage: 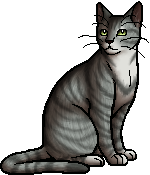 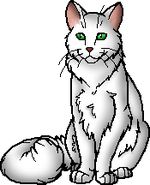 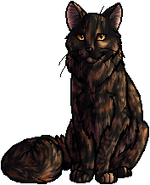 Splashnose
Add a photo to this gallery

(Not in any order)

Wind - You're cool, even though we didn't get to know you that well. Plus I can relate to you - I can run fast too!

Rusty/Firepaw(Not Fireheart/star) - You're just so cute! Brave, smart, pudgy wittle itty bitty kittypet who joins ThunderClan... awww. But I don't like you as warrior or leader - you're WAY too perfect.

Graystripe - You've got a great attitude, all loyal and... I dunno... you're just great.

Jayfeather - You act all tough, but everyone knows you're a sweety at heart.

Honeyfern - You died way too early! You were such a sweet kitty! I wanted you to be be Lionblaze's mate! You didn't deserve to die!

Whitestorm - I liked you a lot. You were so loyal and sweet and brave and... WHY DID BONE KILL YOU? *sob*

Tawnypelt - You have got serious GIRL POWER! Yeah!

Dawnpaw - I only like you because you're Tawnypelt's kit. Otherwise... meh.

Flamepaw - Awww! You actually got to be a medicine cat!

Echosong - I love your name. I kind of copied it.

Spottedleaf - You were so sweet and gentle and caring. But you really need to give up on Firestar now. Number 1, you're dead. Number 2, he already has a mate. You get the picture.

(Not in any order)

Sandstorm - Ugh... spoiled little... gets everything she wants... *mutter mutter*

Squirrelflight - Liar liar tail on fire. You also have the misfortune of sharing Sandstorm's worst traits.

Leafpool - Do I even need to explain?

Fireheart - Yes, Bluestar. Of course, Bluestar. Sure you can have my tail, Bluestar. Anything you want.

Firestar - Perfecty perfecty perfectness. You're too perfect, man, loosen up a little! Plus you really need to die now and let Brambleclaw become leader, 'cuz you've been leader for WAY too long.

Hollyleaf - You have SERIOUS ISSUES! You tried to kill your mom, then you committed suicide! What is wrong with you?!?

Blackstar - You're a big fat murgh. I don't trust you.

Sol - Ugh! You're just like Tigerstar! Way too ambitious!

Scourge - Yeah, I know you had a rough kithood, but that's no excuse for being a mass murderer! Seriously, get a life, fox dung!

Bone - You killed Whitestorm! HOW COULD YOU? DIE! *tramples to the ground in a frenzy*

Ashfur - Once again, I don't even need to explain.

Heathertail - Yiccchk. Blecch. Ewww... *makes other sounds of disgust and hatred that cannot be put into words*

I have lots of other fave and least fave characters... I'm just too lazy to remember them right now XD

SquirrelXBramble - I was so sad when I found out that you weren't really mates!

HoneyXLion - As I said before, I REALLY wanted you to be mates.

BlueXOak - It shows the other side of Bluestar, besides being an amazing leader.

BrightXCloud - You've been together for so long! Awwwww....

FernXDust - You've been together for so long too!

Cinder(pelt)XLittle(cloud) - Never going to happen, but I love it anyway!

SpottedXFire - Spottedleaf died way too early! I was so sad!

TawnyXRowan - I love how Rowanclaw changed his attitude toward Tawnypelt. But I'm not even sure that Rowanclaw's a tom, so maybe s/he shouldn't have a mate...?

HeatherXBreeze - Hey look! It's a pair of stuck-up mouse-brains who don't care about anybody but themselves.

SandXFire - Firestar, you're really too good for Sandstorm.

LeafXCrow - You're both such idiots! How did you think you would get away with it?

SandXDust - When I was reading Into the Wild I thought this pairing was true. But really, Sandstorm does not deserve anybody.

Once again, I have more fave and least fave couples, but I can't recall them just now.

For all people who can't remember:

Warriors Movie:
Possibly coming out in 2011!

Woah! That's a lot to look forward to!


Retrieved from "https://warriors.fandom.com/wiki/User:Echomist?oldid=1188928"
Community content is available under CC-BY-SA unless otherwise noted.