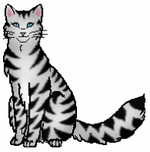 Featherkit was born to Silverheart and Bramblefoot along with Otterkit and Squirrelkit. She wanted to be a Medicine Cat, but didn't like the idea of not being able to get married. So like a normal kit, she got apprenticed to be a warrior. Her mentor was Poppyclaw. She was the best hunter and fighter at the time. She was thought by many cats to be very noble. She then became a warrior, and took on the name Featherwhisker. After 3 moons, The leader, Rainstar, died. Specklefur became the new leader getting the name Specklestar. Specklestar made Featherwhisker his new Deputy. On his way to recieve nine lives, A group of dogs killed him and the Medicine Cat, Willowfrost. The whole of Thunderclan was devestated, for they all loved the kind leader and experianced Medicine Cat. Luckily, Otternose was Willowfrost's apprentice. A sunrise later, Featherwhisker went to the Moonpool to get her nine lives. When she got there, she told Starclan she shouldn't be leader yet because Specklestar deserved to. When Starclan told her she was the new leader and she could do nothing about it, she asked to keep her name, Featherwhisker instead of Featherstar, to honor Specklestar. She said she wanted to keep it because she continued to go on about Specklestar deserving to be leader still. Starclan accepted her and gave her the nine lives. She went back to Thunderclan and accepted she was the only cat who will and has ever kept their Deputy name.

Retrieved from "https://warriors.fandom.com/wiki/User:Featherwhisker?oldid=334729"
Community content is available under CC-BY-SA unless otherwise noted.