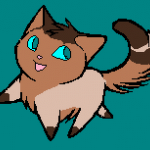 Hi! I'm Fluffytail! Yes, I realize Fluffytail is kind of a wimpy name for a warrior, but let me explain. I used to be a kittypet named Fluffy. I left my twoleg home because I couldn't stand being fed dry, tasteless kibbles, having to make dirt in a box of gray twoleg sand, and never being let outside to smell the fresh air. I had heard from Creampuff, a she-cat from my neighboring twoleg nest, about feral cats that had to fight every day to survive. It sounded dangerous, but exciting at the same time. Creampuff said that they sharpened their claws on the bones of cats they had killed, and grew to the size of badgers when they were angry. I don't know where or how she got those rumors, but I didn't believe one word of them. I went searching for the Clans, but was chased away by one of their patrols. I lived in the alleys of twolegplace, and learned to fight and hunt from a rogue named Kestrel. After many moons, I returned to the Clans, bigger, stronger, and wiser. I asked a patrol if I could speak to their leader, and they agreed, though they kept casting wary glances at me. When I got to the camp, the leader, Oakstar, allowed me to become a warrior. It wasn't that easy though. He said, before he could give me my apprentice name, I had to go through tests. They were difficult, but I overcame them. He gave me my apprentice name, Fluffypaw (some cats were giggling at the name during the ceremony), and I was given a large, gray tom named Stormgaze as my mentor. Becoming a warrior was hard, and I nearly died in my first battle. But I kept pushing forward, and by the time I got my warrior name, cats finally respected me. *yawns and flexes claws* Sorry if that took so long, I'm a bit of a rambler ;) You can go on and explore the rest of my userpage now.

A link to my best friend's userpage!
Retrieved from "https://warriors.fandom.com/wiki/User:Fluffytail?oldid=836697"
Community content is available under CC-BY-SA unless otherwise noted.