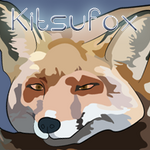 Kitsufox is a Warriors Fan devoted primarily to the Role Play Community of the Fandom. She is frequently referred to as 'Kit', 'Kitkit', or 'The Fox'.

She feels that, with hard work and devotion, this Wiki can become a reference of such quality that even the authors will use it.

Brief History of the Fox

Born in a small town, she grew up in a loving (albeit broken) family, under the tutelage of a mother encouraged individuality and independence. She graduated High School in the year 2000, and attended a Technical School for a short while. Following a rather long hiatus she returned to college and in May of 2011 she received a degree in Graphic Design. A week after graduation she was hired by a local branch of WSI and is now employed as a web designer.

Consider this my official announcement of a personal war on blogs. Or at least Blogs that violate policy. If you notice any blogs that are pointless, purposeless, or otherwise deserve deletion, just drop me a link on my talk page and I'll take a look.

I hate issuing bans. Anyone who likes to do it should never be an admin. Bans are the last resort, the most powerful weapon that exists on a wiki to curtail a problem users. They're used for users who will not learn, refuse to follow rules that they have been informed of, and users who are maliciously causing damage. They are not for users who make mistakes while editing an article. They're not for users who make unpopular edits. They're not to be used to teach lessons to users who make edits in good faith, even if those edits do not necessarily jive with consensus (bans should be used, however, if those users attempt to edit war following having the community consensus explained to them, and the conversations that established that consensus shown to them).

In short: Bans should not be used unless there are no other options left for handling the user.

Retrieved from "https://warriors.fandom.com/wiki/User:Kitsufox?oldid=1270004"
Community content is available under CC-BY-SA unless otherwise noted.