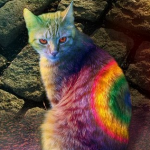 Hey there, I'm Midnight Frost Snow Leopard and Warrior cats is my life! My favorite characters are Snowkit, Moth Flight, and Shadowsight. I've also got this spin off of Warriors called The Cresent Moon Pack (and yes that is spelled exactly how intended). I'm currently reading Outcast, but I've also read a lot of spoilers, so sorry XD. My OCs are Frosttuft, Mintpath, Mintstar, Mintbreeze, Shadowstep, Nightlight, Taffy, Tigerfrost, Dawnfeather, Smokespring, Fadingripple, and Olivepaw. Yeah, I know, that’s a lot, but I could think up an OC off the top of my head right no——Emberfur? XD I’m crazy for Warriors.

Here is my main OC, Olivepaw.

Olivepaw is a small calico she-cat with a huge, bushy tail.

"I kinda wanna be a medicine cat..."
—Olivepaw while on patrol with Steelclaw Real life, page

"Leopardfury! What in the name of StarClan is your problem?"
—Olivepaw screeching at Leopardfury, who was being a piece of fox dung Real life, page

"But my moss next doesn’t exist!"
—Olivepaw making a dorky excuse to Steelclaw to not have to change her moss nest Real life, page

"Da warrior code! It’s something that StarClan says it’s important! So we MUST follow it! One, guard your Clan, two, don’t fall in love with cats from other Clan, three, Feed the older cats and da kittens first!"
—Olivepaw screaming to Steelclaw about the Warrior Code Real life, page

"It’s amazing being a kit."
—Olivepaw to her sister, Swiftkit Real life, page

"Medicine cats are pretty crazy, but I've never heard of one as out-of-it a you!"
—Olivepaw to Mistybound Real life, page

And here's my BloodClan OC

Dusky is a scruffy dark gray she-cat with piercing yellow eyes and a yellow collar studded with cat and dog teeth.

Dusky was born a kittypet named Kiki. Kiki lived alongside a dog named Dart, who their twolegs acted like “Bodyguards for their almighty dog leader or something.” She once attacked him and her twolegs refused to feed her for two days. She got very angry at them and decided that she would get revenge on them by attacking Dart. She snuck into his bed and pried his tooth out. She thought she had super strength, but in reality, she had gotten ahold of his loose tooth, as he was only a puppy. She found how to put the tooth in her collar, and admired the way it scared Dart half to death. She thought she had won, and that she had gotten full revenge--little did she know that the pain-filled whimpers and howls had woken the twolegs up. The male twoleg stormed in, and picked Kiki up with rage. He then threw her against a wall, yelling wildly as two other twolegs ran in. She got up and darted out of her flap door, jumped the fence, and went flying, escaping into the forest. This was at 7 moons old. After wandering for a while, she found a ShadowClan patrol. She asked if she could join them, but instead of answering, they chased her out. She raged, almost completely convinced that no one accepted her. She found ThunderClan and asked to join them. A few cats questioned her collar, asking things such as, “Where did that tooth come from?” or “Are you a kittypet or a rogue with extra soft fur?” Nevertheless, they let her join, and keep her collar. She learned how the Clans worked and soon formed the opinion that they were very unfair and how unreasonable the code was. After being told not to make friends with a young RiverClan warrior, she raged, telling them she would like who she wanted. She was harshly punished, and after this, she really hated the Clans. Instead of making them exile her, she ran away herself. This was when she was about 12 moons old. Completely convinced that she couldn’t fit in anywhere, she started her new life as a rogue. She settled in a twolegplace where many stray cats roamed. She fought a dog, getting away with two of its teeth. She discovered BloodClan, and tried one last time to be accepted. Miraculously, they let her join, and she became highly popular among them. She made good friends with a cat named Mint, who also had been a kittypet. She was there in the battle against the Clans, and even enjoyed fighting them. Most ThunderClan cats were astounded that their former member was now against them. In the battle, Mint died, and that’s when she decided not to make friends anymore, in fear of losing them. She sort of creepily took one of Mint’s teeth and put it on her collar as a “memory”. At the end of the battle, she was able to pry a tooth out of a young Clan cat, whose identity is a mystery. She became deeply respected in BloodClan, mostly because she was scary to them.

Add a photo to this gallery

""Great, let's grab the dogs throat and hope to die!""
—Kiki to the neighbor cat about her roommate dog and protective owners.

"Duskfur: I see no reason to not befriend who I want. He's really nice, and needs a little help with his confidence!

Firestar: I understand, but you must follow the Warrior Code!

Duskfur: Why? There's nobody who's gonna walk up to my face and force me to follow it except you!

Duskfur: I'm not scared of them!

Firestar: You shouldn't be, but you should respect their rules.

Duskfur: Ha! I would go strait up to their faces and ask if it's morally right to be separate and always be jerks when we could just share!

Duskfur: Why don't you now?"

—Duskfur and Firestar about the Warrior Code

""Why should they have to defend the nursery in battle? Are cats really heartless enough to try and hurt kits?""
—Duskpaw to Brackenfur before a battle

"Enough!"
—Dusky yowling for her group of BloodClan cats to retreat

"Just---Just don't."
—Dusky to Brambleclaw when he is going to scold her for joining BloodClan.

Retrieved from "https://warriors.fandom.com/wiki/User:Midnight_Frost_Snow_Leopard?oldid=1471074"
Community content is available under CC-BY-SA unless otherwise noted.