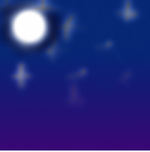 You can actually see un-erased shading around the edges... *shudder*

Anyway, my name's Petalwhisker, but I prefer to be called Robinfur or just Robin. I don't know what to talk about, so I'll just end my tiny speech here.

Cinderpelt - Loyal to her Clan until she died, and still loyal right now. Don't like Cinderheart, though.

Graystripe - Big fluffy furball who also happens to be a senior warrior.

Silverstream - The result of watching too many SilverxGray AMVs.

Feathertail - The result of watching too many Feathertail's Death scenes.

Crowfeather - The only good WindClan warrior.

OneWHISKER - Why did I put the "whisker" in capitals? BECAUSE HE WAS ONLY GOOD AS A WARRIOR.

Ravenpaw - Do I even need to explain?

Cloudtail - One of the few cats in the Clan that actually have some PERSONALITY.

Characters that deserve to be locked in a cellar for 10,000 years

Brambleclaw - He's such a LOSER. He bosses people around and gets angry if they don't listen. He was fine before that, but it was like becoming deputy did something to his brain.

Cinderheart - The reincarnation of Cinderpelt, my eye. Cinderpelt was a loyal medicine cat who kept on going even though she knew she was going to die. Cinderheart, on the other hand, broke up with Lionblaze because she was jealous of his powers. :/

OneSTAR - Do I even need to explain?

Firestar - Not sure if I like him or not; he's such a warm, grandfatherly figure, but at the same time he's a Gary Stu.

Scourge - His past was pretty cool, but he became such a wreck.

Princess - The reason one of the awesome characters is in the Clan, but also this soft, weak-muscled little KITTYPET.

I know this is a fan website, but I just need some space to vent some of my dislikes. Believe me, there's TONS, but I'm just going to name a couple... (Two-star rating)

One of the things I really liked about the Warriors series was the curious, ethical world that lay somewhere in England. There's the religion, there's the characters, and the setting is pretty well thought-out. It's a very creative book with a very creative storyline.

Another thing was that the characters all had very, very deep histories. Bluestar's was one, and Crookedstar's is, too. There's such deep explanations for how so-and-so got here, and how so-and-so came to ThunderClan. Once again, it's pretty well thought-out.

One of the things that confused me was that the characters kept on changing descriptions like they were magical or something. One second Dovewing has pale golden eyes, the next she has blue. It seems like the Erins can't keep up with all the cats they're adding to the story, and that's probably because there's too many characters. It's very confusing and hard to remember who's who.

And the GARY STU'S. The main characters have no PERSONALITY. They all act the same - it's all "I must do this to please StarClan" and "I will not do this to my Clan." The books have been criticized to be "limited essentially  to each's individual's function within the Clan." I wholeheartedly agree with that. Jayfeather's the only one with a good personality, but I don't especially like him. Crowfeather isn't exactly a main character. Victoria may say that she sees "shades of gray" in some characters, but most of those apparent shades aren't that well-explained. Bluestar spent, like, two seconds grieving for Mosskit before she went on to Sunningrocks, seeming not to care that both of her other kits might die.

The series was very confusing. It was like Greek mythology - it had WAY too many characters. This wonderful idea of four Clans of cats is completely overshadowed with the fact that there's too many characters, and that three quarters of them aren't really that well-developed.

Also, there was the lack of explanation in some topics. How did cats come up with the ceremonies? Why did the cats start going into the forest anyway? Why is it that they automatically know how to fish, swim and stalk prey if some of them are kittypets? Again, I say, there's lack of explanation.

The MATURITY. There's tons of blood and gore in the series, not to mention lots of dying in battles and stuff like that. Plus there's love. It's pretty apparent that a lot of cats are in love with each other at any given time, and there's tons of love triangles and pretty mature things. Not to mention the cats giving BIRTH. This is a CHILDREN'S NOVEL. THIS BOOK IS MEANT FOR CHILDREN.

And that's about it! The writing's not the worst, it's pretty flawed, but it's still interesting. I recommend it for people with strong stomachs and a bad eye for flaws.

Retrieved from "https://warriors.fandom.com/wiki/User:Petalwhisker?oldid=808213"
Community content is available under CC-BY-SA unless otherwise noted.