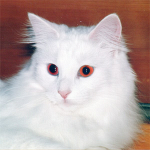 aka The Creator of Everything

59 Edits since joining this wiki
May 12, 2012
RandomKitten
The Creator of Everything
File:RandomKitty.request.png
Talk | Contribs | Signature

How I Started Reading Warriors

About three years ago, I saw my brother come home from his school's book fair with a golden colored book with an orange cat on the front. It was labeled "Warrior's:Firestar's quest". I had known my brother liked reading those books. but really paid no attention. Maybe six months later (It could of been longer) I spied the first warriors book at the library, and decided to check it out. I started reading it, and I enjoyed it, but it got confusing and it went to fast. So, I stopped reading it and returned it. A year later, I was at the library again, when I saw the same copy of "Warriors" I had tried to read the year before. I decided to check it out and try to read it again. I did, and I loved it. The library didn't have the second on so I asked my friend Nick (Who had started reading warriors a little bit before that time) if I could borrow his copy. I did, and I finished it in a day. I went to the library to get the third book, but Nick had checked it out! I tried waiting, but I couldn't, so I forced my aunt to bring me to barnes and noble to buy me the next four in the series. I started reading them and I fell in love with it, all the character, and the world itself. I never really had a favorite character until I got to the Power of Three series, and met Jaykit. I loved him so much I would skip through Hollyleaf and Lionblazes' chapters to read from his perspective. After that, warriors was my life, and I spent my time thinking about the prophecies and making up new characters and stories. I have read all the warriors books, and I have memorized the last paragraph of "The Last Hope".