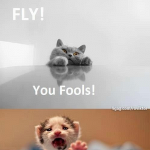 I own a copy of Bluestar's Prophecy, SkyClan's Destiny, Battles of the Clans, The Fourth Apprentice, Night Whispers, Fading Echoes. All of the first, second and third series. I have read all warriors stories, mangas, super editions, field guides, and online stories, plays and essays. My BFF is Cinderblaze12. She's my friend in real life too! I keep trying to get some of my other friends to read warriors but they won't. I finally got one to read the first one but she's still reading it. Then she stopped. I think someone should delete the page for Allegiances of the Clans, it will never happen. It absolutely annoys me when people create pages that have nothing to do with Warriors. I say things like "Great StarClan" and "FOX DUNG!" at school. I am obbssesed with Warriors it is my absolute favorite series. I try to get all the books. I love drawing warriors cats and coming up with things i want to happen or different ways things in the series could have happened. I enjoy catching Sharpie markers that fall out of the sky, me and my two friends from school have twelve all together. KK bye.

I was born in RiverClan to my mother Icestorm. She was also half ThunderClan and on that side we have SkyClan in it. My father lived in WindClan with his old mate and two sons he's also half ShadowClan. I was apprenticed to Whitewillow. I met an apprentice to ThunderClan named Cinderpaw (later Cinderstar). We are best friends. Then I decided to to train as Spottedfern's medicine cat apprentice. Then I became Medicine cat with the name Redheart. StarClan called me to go to the Tribe of Rushing Water to solve a mystery. I couldn't tell my clanmates. I left RiverClan, I got lost on the way to the Tribe, so I lived as a loner named Red for a while. When I got to the Tribe I became a prey hunter named Red Sky at Dusk. When I found what I was looking for I came back to my clan but I had to be a warrior, Redfern. My friend was now a warrior too Cinderblaze (Cinderblaze12). I got an apprentice. Then I took a mate, Rockclaw. We have two sons, Rootclaw and Duststorm and a daughter Silvermist. I got another apprentice became deputy and then leader, Redstar, and Cinderblaze is leader of ThunderClan now so our clans are allied.

Names I Have Issues With

Archeye-*to his mother* Okay so did you hate your son or what....

Bouncefire-OGS the fire is bouncing, RUN AWAY!

Driftkit-OGS the kit is drifting SAVE HIM!

Fennelstar-what the heck is a fennel

Frecklewish-kk, so where'd wish come from

Heavystep-was he that over weight when he was born

Jumpfoot-what if he can't jump

Mossfire-the moss is on fire QUICK GET A FIRE EXTINGUISHER BUT DON'T PUT IT BY FIRESTAR!

Nightmask-they don't know what masks are

Nightwhisper-is the night whispering to me

Oatpaw-how do they know what oats are

Oatwhisker-how do they know what oats are

Onestar (whisker)-did he only have one whisker

Pearnose-did she have an odd nose

Runningbrook-what if she can't run

Runningkit-what if he can't run

Runningwind-what if he can't run

Sedgecreek-the sedge is in the creek

Silverhawk-that hawk is silver, call ripley's believe it or not!

Silvermask-they don't know what masks are

Smoketalon-the talon is on fire!!!

Sneezepaw-he can't sneeze that much

Stonestream-the stream is made of stone

Sunfish-wow, run out of names much

Sunstrike-strike?? is she on strike?

Tawnyspots-he's not tawny or spotted

Willowshine-Oh look, its a shiny willow

Okay so what up with you? Were you secretly a leader we didn't know about and only had three lives then retired? Were their three brown tabby RiverClan elders named Heavystep at the same time? Or like when you died, in sunset, you were alive so after they burried you you clawed your way out and then when you died in long shadows they had to unburry you and then you died for real in between sunrise and the fourth apprentice, or are you going to pop up alive again!

Okay so like the most popular name and all we need is one in shadowclan and we're all set. and there was a tom named that! that is so a she cats name.

Retrieved from "https://warriors.fandom.com/wiki/User:Redfern123?oldid=1274727"
Community content is available under CC-BY-SA unless otherwise noted.