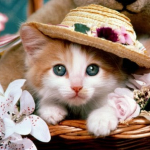 But you can call me Snape, Snapey, or Kitty Grell. :3

I absolutely LOVE Warrior Cats-they're my second Favorite Series next to Harry Potter.

I have four loyal Admins, and only a few really active members including me. If you're interested, message me on my talk page and on my Roleplay Wikia. Thanks!

Here is my Description and Backround Information as a Warrior Cat:

My name is Rainbelly, and I live in ThunderClan but never knew that I had a true Kittypet Heritage-I was once a Warrior who soon gained the rank of Deputy.

I am a grey-furred she-cat with a Rain Droplet shaped birthmark on my underbelly, hence my name.

As a young kit I was taken into the forest by a strong, flame-colored tom named Sunfall, who, until I was older, I found out was my Father.

I am in love with my cloest friend, a tabby tom with a torn ear and scarred muzzle named Spottedbelly, but soon mated and had kits with Scartail, a handsome bracken-colored tabby with chocolate-colored stripes from WindClan, and was blinded by my love for him, forgetting that I even loved Spottedbelly.

My Mother is a Kittypet named Claire, a grey-blue she-cat with bright green eyes.

I have a Kittypet Brother named Oak, a bracken-furred tabby tom with bright blue eyes.

I have a two Kittypet Sisters named Misty, a silver-furred she-cat; she lived in Twolegplace with Claire and Oak.

But my second Sister is named Sorrowpelt, a white-furred she-cat with black splothes and golden-yellow eyes. Yes, she was born a Kittypet, but was taken into the forest by Sunfall shortly before I was taken by Sunfall.

And she was raised in RiverClan with a horrific grudge against me; as in she'd kill me if she had the chance.

And finally, I have four kits, which I had with Scartail-three toms and one she-kit.

The toms were named Scarkit, Spottedkit, and Saltkit, all with strange coat patterns and appearences, none matching mine or Scartail's coat color.

My she-kit was named Rainkit-only she gained the grey fur and my Rain Droplet birthmark.

I am Rainbelly, Deputy of ThunderClan.

What I Think Of Other Warrior Cats

Graystripe-Do you even remember Silverstream?

Millie-Quit being mean to Jayfeather!

Ivypaw-Learn to listen and shut up.

Yellowfang-You're me written all over you!

Spottedleaf-Kitty stalker. o_o Firestar's decendants aren't ever left alone with her around!

Onestar-I liked you as Onewhisker, but quit acting bratty to ThunderClan.

Retrieved from "https://warriors.fandom.com/wiki/User:SnapeFan1?oldid=551624"
Community content is available under CC-BY-SA unless otherwise noted.