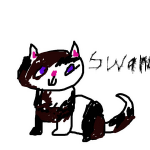 this is the only thing left of my page

Crowfeather: I don't think of a crow feather that can be such a freaking bully. If you find one, tell me. (I would use a ruder word, but there could be younger audiences out there.)

Feathertail: OOH ITS SO FLUFFY!!!

Stormfur: If he's got a storm in his fur, his pelt must be pretty messy.

Daisy: Well, there's nothing wrong with her name, but I wish she could turn into a daisy, pronto, and stop whining.

Berrynose: When someone eats his nose, don't blame me.

Poppycloud: I just hope she's not near a StarClan cat who has hay fever. (Anyway, why call it hay fever? It should be flower fever or something...)

Sharpclaw: All claws are sharp. Duh. (Well, why have blunt claws?)

Snaketail: Do snakes have tails?

Beechfur: Ticks basically could live on him.

Onewhisker: Mudclaw must be pulling his whiskers out in revenge.

Barkface: I guess he smashed his face into bark, then got dog speaking powers. Rosetail: The perfume-makers are after her!!

Mossyfoot: Her paws are good for sleeping on.

Flametail: Why wasn't his name changed to 'Putoutbythelakeflametail' when he died in the lake?

Spiderleg: He should become a medicine cat, with all those cobwebs. And he's hairy.

Lostface: We need a map for her face.

Cloudtail: OOH ITS SO FLUFFY! (this can turn into a meme.)

Toadstep: He must have tap-dancing lessons.

Heavystep: Are his paws rocks in disguise? Rock: If he's holding a rock concert, he needs to wear shades and a cape. Tanglewhisker: He needs to visit a curler store.

Bone:Let's not give him a chance to help BloodClan. We're better off feeding him to a pooch.

Copperpaw and Firestar: It's...Blackclaw! (Copper turns black when it's heated.)

Mudfur: He could earn a nice salary in a salon.

Moonflower: Shouldn't she be friends with a dog? Well, there is a dog called the Moonflower dog. Look at it's page here.

Retrieved from "https://warriors.fandom.com/wiki/User:Swanflutter?oldid=910790"
Community content is available under CC-BY-SA unless otherwise noted.