I like to pretend I know what I'm doing (most often I don't). I use Firealpaca to create my chararts. I'm also very passionate about the character pages, especially making sure all the information is easily accessible. If you have any suggestions, I'm open to hearing them! I also struggle with social anxiety, but being on this wiki has helped me practice reaching out to others. In addition, I'm also a graduate student and an essential worker during this crisis, so sometimes my activity can be kinda spotty when I have to prioritize my school work.

Feel free to leave a charart request using the template on my talk page if they are open. If you having any questions regarding anything, I'll do my best to answer them.

Firealpaca Lessons
My Cats
These are my cats that I've managed to sneak into the wiki.
CT kittypet, YS star 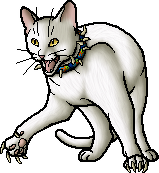 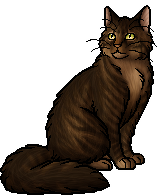 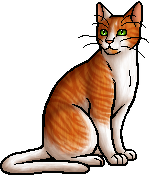 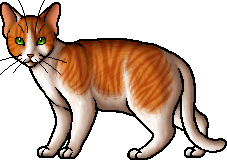 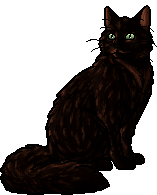 "Kill me. Kill me and live with the memory. Then tell the stars that you won."
―Gray Wing to Clear Sky during the Great Battle The First Battle, page chapter 19

"We all have our flaws, but we overcome them. And sometimes, it's our flaws that make us who we are."
―Talltail to Hopkit Tallstar's Revenge, page 487

"But there was a time back on Cybertron, in the twilight hours of the Golden Age, when Optimus and Megatron were not sworn enemies.
"Do you recall when I mentioned that Optimus wasn't always a Prime? Well he wasn't always Optimus, either. He was once a clerk, in the Iacon Hall of Records named Orion Pax. But as he learned more about Cybertron's past, he grew increasingly concerned about the present corruption in high places; an inequality among the masses. Orion became inspired by the words and ideas of a gladiator one who had named himself after one of the thirteen original Primes—Megatronus. Megatronus vowed to challenge Cybertron's leadership and demand that all Cybertronians be treated as equals. This gladiator turned revolutionary rapidly gathered a loyal following, Soundwave chief among them.
"Orion began corresponding with Megatronus, who came to be something of a mentor to him. As Megatronus left the gladiatorial arena for the political, he saw fit to shorten his name. Before long, Megatron appeared before the High Council to propose his vision for a just society. And it was here that he began to reveal his true colors, proclaiming the need to overthrow the old guard with force and arrogantly demanding to be named the next Prime.
"But Orion did not believe in violence as a means of achieving justice. The sparks and minds of the Council were moved by Orion's words. Here, for the first time since Cybertron's Golden Age, stood someone worthy of being a Prime. But that honor could only be truly achieved by earning the legendary Matrix of Leadership.
"His ambitions thwarted, Megatron spitefully severed all ties with Orion and the Council, and came to wage a war on all who opposed him through his growing army of followers which he named "Decepticons." He vowed to claim the Matrix for himself, wherever it might lie. In time, warfare consumed Cybertron, poisoning the planet to its core.
"Orion journeyed there, hoping to reverse the ill effects and found himself before the very Spark of our life-giver, Primus himself. The ailing Primus sensed the innate nobility within Orion and bestowed the Matrix upon him. It was thus that a surprised and humbled Orion Pax came to be Optimus.
"The last of the Primes."
—The origin story of Optimus and Megatron, read by Jeffrey Combs Transformers Prime, "One Shall Rise, Part 3"

Megatron: And why should you care, Orion Pax? You are no Prime.
Orion Pax: That may be true, or yet another deception, but this much I do know: my sympathies lie with the Autobots, and you are not one of us!
—Orion Pax accepting the truth Transformers Prime, "Orion Pax, Part 3"

"While he may have wielded the power of the ancients for only one day, Optimus does not require it to be the mightiest of warriors."
—Ratchet about Optimus—who got his tailpipe kicked, his new sword destroyed, and resumed decoding Project Iacon all in the matter of ten minutes—like the boss he is Transformers Prime, "Alpha/Omega"

Starscream: Megatron will undoubtedly hold us responsible.
Knock Out: But...we are!
Starscream: Well, you are, mostly.
—Starscream blames someone else. Surprise, surprise Transformers Prime, "Thirst"

Medix: We don't need drawings or lectures. Not when we've read the course book three times, right guys? ...two times, then? ...tell me you at least read the book?
Hot Shot: Ugh, I tried. It was soooo booorring.
—When a cartoon for toddlers perfectly describes college life Transformers Rescue Bots Academy, "Who's Teaching Who?"

"The question that once haunted my being has been answered. The future is not fixed, and my choices are my own. And yet, how ironic...for I now find that I have no choice at all! I am a warrior...let the battle be joined."
—Dinobot facing his destiny Transformers Beast Wars, "Code of Hero"

Megatron: Destroy them!
Dinobot Clone: ...Negative.
Megatron: What?! What possible reason could you have to disobey me?! I am your master! I am your creator!
Dinobot Clone: And I...have my HONOR!
—Dinobot's clone finding his destiny Transformers Beast Wars, "Nemesis Part 2"

"That man is playing Galaga! He thought we wouldn't notice...but we did."
—Tony Stark The Avengers

"I think all our memories, and everything in it...can be nothing but the fiction we tell ourselves."
—Dr. Neil Watts Finding Paradise

"I'm going to tell you think now because I might not get a chance later. They call Anakin the Chosen One but you have a destiny, too. You have a long road to walk and it won't always be easy. [...] Everything happens for a reason. Everything. The good, the bad, the indifferent. They all have a purpose. Never forget who you are. Never forget what you serve. And no matter what happens, keep your face turned to the light."
—Taria to Obi-Wan Star Wars Clone Wars Gambit: Siege, page 354

"Despite having started out in a technical field, these individuals find themselves in a managerial position; they are public administrators. Some people may desire promotion to a managerial position; others may not. (There are some jurisdictions in which continued advancement practically requires moving into an administrative position.) But whatever one’s motivation, the new administrator soon discovers a completely new world of work. Now the most pressing questions are not the technical ones, but rather those having to do with management, with program planning and design, with supervision and motivation, and with balancing scarce resources. Often the situation is quite bewildering; it’s almost as if one has been asked to change professions in midcareer from technical expert to public manager."
—Denhardt, What is Public Administration?

Obi-Wan: Anakin, only you can decide what works best for you. How strongly you feel things, what you choose to care about. I can't make those decisions for you. I can tell you what I think, I can give you the benefit of my experience, but I can't live your life for you.
Anakin: I already know what you think, Obi-Wan. You think I'm hot-headed, I'm impulsive, that I let myself feel too much.
Obi-Wan: Yes, sometimes I do. And sometimes I can't image who I'd be today if not for you. Though you frequently drive me to distraction, Anakin, I cannot deny this: knowing you has made me a better Jedi. I should've told him that long ago. I shouldn't have let him doubt himself. Lectures are all well and good, but there's a place for praise. I too easily forget that.
—the feels Star Wars Clone Wars Gambit: Stealth, page 121

"Watching them smile at each other, Taria felt their kinship and the complicated love. They were such an odd pairing on the face of it, Obi-Wan so self contained and Anakin so reckless. But they'd found their balance, and now, they were two halves of a whole. Anakin had been the making of Obi-Wan, and Obi-Wan had shown Anakin what it meant to be a good man."
—Taria's thoughts about Obi-Wan and Anakin's bond Star Wars Clone Wars Gambit: Siege, 361-362

Steve: We have to stop them, and this time, we're not marching in and making it up as we go.
Tony: Look...I admit it. If you hadn't come up with this plan to infiltrate the Cabal, we never would've learned how serious this was getting.
Steve: Thanks, but...?
Tony: But, with my armor gone...all I can do is improvise. Steve, even without your shield, you're still Captain America. Without my armor, I'm just—
Steve: —Tony Stark. The Tony Stark. Billionaire. Genius. You're probably one of the three smartest men in the entire world. You're as tough as they come. You invented hardcore. The Avengers are lucky you're on our side.
Tony: Really? You know two people smarter than me?
Steve: Can't you just take a compliment?
—Tony Stark and Steve Rogers when their undercover operations are compromised Avengers Assemble, S1E13

Tony: This thing's made of dark star composite metal. It's extraterrestrial. I think my dad studied it.
Sam: His work on xenometals was my favorite book in high school! *beat* Okay, so I wasn't the most popular kid in school. Howard Stark must've been an awesome dad!
Tony: Awesome scientist. He didn't have much time to be a dad. Too busy saving the world to worry about his people skills.
Clint: *sing-songy* Sounds familiar.
Tony: You got a point, circus act?
Clint: Nope! No point at all.
—Don't tell Tony he has daddy issues in Avengers Assemble, S2E1

Steve: Tony...you've been my best friend since...since maybe forever.
Tony: I like to think I work best alone, Cap. But the truth is, I'm better because you're my friend.
—Please just let them be happy Avengers Assemble, S3E26