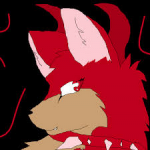 Welcome to my profile! If you have any questions or coments, let me know on my talk page!

I mainly work on here: http://the-warrior-cat-clans.wikia.com/wiki/The_Warrior_Cat_Clans_Wiki

Bloodstrike was born to Scarbelly with an unknown mother. His brother was Shadowfire. When he was young, he was ferocious and always wanted power, but his brother, Shadowfire kept him from having it, which made him weak. His brother misunderstood him and said to him "You are weak, pathetic, you are nothing!" Also saying to Bloodkit that he was and had no power over anyone. He left his family after being disincluded and became a alone-rogue-kit. He wanted to name himself Death, for someday he would kill Shadowfire and prove to him that he was wrong.

He grew older each day, and wanted power, but knew his brother was correct, that he was only a kit and couldn't hold much power until he was older. He roamed the forest and discovered a cat named Silverwind, who was nice to him and treated him fairly. He told her about what Shadowfire said, and she replied saying it was awful and that she felt sorry for him. When he was at the age of 8 moons, he was drought to using her, but he couldn't help but love her since she was the only one nice to him.

Moons after falling in love with the she-cat, he decided to join what was called a "Clan". He heard rumours of Clans from rogues discussing them, and how they followed StarClan. He found a Clan and joined an ambitoius group of cats called BloodClan, who did not in fact follow StarClan. Part of his power was gained by the BloodClan cats when he proved that he was true to his name. He wished that Shadowfire could see him strong, powerful and mighty to his Clan, what he didn't know was BloodClan wasn't actually a Clan of real true cats.

Silverwind tried explaining to him that BloodClan was different and that they had no hearts. She comforted him and asked him to leave, but he refused. After such discussion, he left for a few days and discovered Shadowfire once again. He bragged to his brother about how much power he contained and how weak he was in revenge and killed him. Shadowfire regretted treating him badly, but never got the chance to tell him.

When Silverwind figured out he was a cold-hearted killer, they split apart and she left him. He called her a tratior and never spoke, nor seen her again. After returning to BloodClan, he figured out Silverwind was right, for they attacked him and called him a tratior. He was attacked by his former Clanmates and left in scars. He then left and realized power isn't everything, it's just a hunger for attitude and weathlessness.

Retrieved from "https://warriors.fandom.com/wiki/User:Victoria221?oldid=936597"
Community content is available under CC-BY-SA unless otherwise noted.