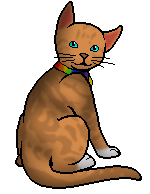 I am a total cat lover, and I LOVE Warriors! My family says I have a bad addiction to it, so, wahoo! I am smart, creative, and a great writer.

I joined the Warriors Wiki originally to fix one grammar mistake on One-eye's page (it was really kililng me), and then I just got more and more into it. Since very few of my friends like Warriors, and my family doesn't think it sounds interesting, I feel more at home on the internet than I do at home. I keep getting more active on Wikia.com, because it's nice to know that there are other people out there who are interested in the same things you are--as strongly as you are.

On the Warriors Wiki

I've edited a few pages, mainly talk pages, and I have my own blog--Terrible Parents. Cats could be better at raising kids...

I'm also part of a charat project, as an apprentice now still. I've made two pics, Echosong's MC image, which got rejected, and Flame's rogue pic, which is currently at CBA!! :) My mentor is Stealthfire star, and I'm very thankful to have her as a mentor.

On the Warriors Fanfiction Wiki

I started a series called Big Sister: ThunderClan, which is just a knock-off of Tanglefrost's Big Brother (and yes I asked permission first), but I didn't even get through the first episode. I've basically already given up on it. I'M SORRY FANS! PLEASE FORGIVE ME! :'O

I also have another fanfiction, called Into the Forest. It's part of a series. I have others on my computers, but I haven't posted them yet.

On the Warriors Fan-Fiction Area Wikia

This is a wiki that I actually created myself. I've made most of the pages and edited all of them. It is still new and needs people (I literally have four people on it, including myself), so I'd be glad to welcome anyone who wants to join. It's literally the Warriors Wiki but for Fanfiction instead of canon things.

On the Warriors Answers Wiki

I've gone through and answered most every unanswered question there is, and I'll keep going. It's nice to be tested on my Warriors knowledge.

On the Disney Wiki

On the Familiars Wiki

""Loyalty is what matters, and that exists now, not in the past. Loyalty has to be proved every day, in every piece of fresh-kill brought back for the Clan, every claw mark on our enemies, every patrol, every training session.""
—Firestar

"Fire will save the Clan...you never understood, did you? Not even when I gave you your apprentice name, Firepaw. And I doubted it myself, when fire raged through our camp. Yet I see the truth now. Fireheart, you are the fire who will save ThunderClan. You will be a great leader. One of the greatest the forest has ever known. You will have the warmth of fire to protect your Clan and the fierceness of fire to defend it. You will be Firestar, the light of ThunderClan."
—Bluestar explaining the prophecy she received from Spottedleaf to Fireheart A Dangerous Path, page 311

"I love you, Sandstorm. You'll never be second-best for me. My love belongs here and now, in the life we share-and it will last for all moons to come, I promise."
—Firestar to Sandstorm Firestar's Quest, pages 401-402

Graystripe: "So you didn't wait for me."

Graystripe: "You could not risk the Clan by keeping them in the forest."

Firestar: "If it had only been my life at stake, I would have waited."
—Graystripe's return The Sight, page 144

""I understand. But I miss you.""
—Mosskit to Bluefur during her leader ceremony

I am Mormon. It's a sub-religion of Christian is how I describe it. We believe in the 13 Articles of Faith .

My eyes I think are mainly hazel, but I'm pretty sure the green-brown ratio is a little green heavy.

My hair is a dirty blond color.

BTW i can speak Pig Latin, but I'm still working on understanding it, you know?

Add a photo to this gallery

Retrieved from "https://warriors.fandom.com/wiki/User:Warriorcat1195?oldid=1052278"
Community content is available under CC-BY-SA unless otherwise noted.