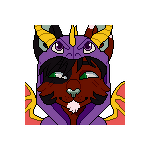 You did Ivypool's warrior picture right? Do you think you could make her as a queen for me please? Thanks! Shimmer Currently Ripple 08:21, September 29, 2012 (UTC)

Oh no, I thought that since you made charart for characters, you would make them for users, So sorry! Shimmer Currently Ripple 00:26, September 30, 2012 (UTC)

Hi! I'm doing Poppydawn't alt queen, and I was wondering if you could message me the hex codes for the color of the base pelt and shading, that you used on her alt elder. Thanks! =) -Ducksauce 02:40, October 11, 2012 (UTC)

Hi Ivy! I was planning on doing Newtspeck's warrior image, but I wanted to make sure everything was right/the same with the other images. Do you mind sending over her xcf. file? That would be great help ^^ If you can, just send it to mistypebble.ww@gmail.com. Thanks! =3 ☯ Mistypebble ☯ 22:55, October 24, 2012 (UTC)

does your signature say "sometimes, i dream of cheese"?

because i cannot read the font xD

Happy birthday my amazing friend! I send you good birthday wishes and I hope your day will be filled with fun and joy! By the way, send me leftover cake. ;D ilu and have the best day ever 8DDDDDD --AtomicPumbaa! Let me define babysitting! 06:21, January 15, 2013 (UTC)

It's been awhile since I've been on here :)  My little sister asked me to post 2 Charart requests here for her story.

Alex- looks exactly like the Webkinz Alley Cat (I can post a pic if you like, or you can just search it on Google), brilliant blue eyes, long fur, StarClan base

I recently saw the softpaw sprites/charart blanks that you uploaded. I wanted to say that you did a very good job at making the blank design. DarkstreamMountainClan (talk) 17:32, March 14, 2013 (UTC)

Hey Ivy, it's Sorrel. first of all, congrats on the Softpaws - they look great! And you know the texture on Sky's image? Can you tell me how to do it? I'm just wondering, as I'm thinking about attempting Sky's rogue if no one has done him by the time Thunder is approved. ☮♞✞SorrelΩflower☠☯⛄I need Coffee!

Hey, Ivy. I'm doing Perchkit's Star, and I was wondering if you could send me the files for his kit, if you still have them. My email is shoonderp@gmail.com. Thanks, ShoonDerpLike nobody's around~ 21:31, April 21, 2013 (UTC)

I'm really sorry about what I said regarding your image's shading. I didn't mean it in offensive terms, though I may have gotten my word out wrong. You're seriously an amazing artist, and looking over what I said, that was not something I should have said to an awesome user like you. I really should have thought about what I said. Once again, I apologize for what I said about your shading.

Sorry if I'm bothering you Ivystripe, but I just made myself a signature and it's not appearing the way I want it to. I think you're probably not a signature expert, but maybe you could help me. It appears like this-{{SUBST:Nosubst|User:Cherrycloud/Sig}} (talk) 17:25, August 25, 2013 (UTC)but I want it to look like the one on my signature page here. Also I changed my name to Cherrycloud and it works! Thanks for helping me and I made an archive. Reguards, {{SUBST:Nosubst|User:Cherrycloud/Sig}} (talk) 17:25, August 25, 2013 (UTC)

I swear I saw you somewhere.

I was on my main wiki, Animal Jam wiki. I was going to put a signature request on Jaguarstar19's message wall. Then I saw a post by you saying there was an unauthorized picture (If memory serves correctly, it was Jayfeather and Lionblaze peeing on the warrior code and Hollyleaf frowning at them, and also it was posted by Cheif Spiritstone.). I remembered you from the Warriros wiki. So hai ;) *No man deserves to be trapped in jelly.* (talk) 22:20, August 28, 2013 (UTC)

I have no images to do and won't have any for a while, so I decided I wanted to practice tweaking but I don't have that many files! I'm really interested in your pale ginger alt for Tawnypelt as well as your Cinderpelt MC so I was wondering, can you send me those xcf's? I promise I won't use them on personal images/wiki use- I'm just going to keep it on my computer. User:Kelpsey/Sig 23:25 Fri Oct 11

Her, Ivy! I'm doing Rainswept Flower's StarClan image, and I was wondering if you could give me the .xcf file if you still have it for the hex codes? Please and thank you.☽➸ Hawky Void Shadowshot23:11 Fri May 23

Hey, if you could give me the file for Clear Sky that would be great. Thanks. My e-mail is athenaflower6@gmail.com ☽➸ Hawky Void Shadowshot16:19 Wed Jun 18

hey I was wondering if you still have Jayfeather's apprentice file and if you could send it to me? my email is kempslolrofl@gmail.com thanks~ -Ducksauce 03:24, July 27, 2014 (UTC)

Hi Ivy; Could you send me the file for Dawn River? Im doing ehr Queen, and it would help a ton.

Just send it too my brother's email, please: Goofygooberaustin@gmail.com

Hi Ivy! I'm just here to notify you that Brambleberry's starclanner, one of your images is being nominated for its shading. I was just wondering if you would like to claim Brambleberry, if you want to, that is perfectly ok with me. =)

May I have the file for Blustar's leader alt? My email is aeplumm96@yahoo.com.

Hey. Yes I'd really love the file; it'll just make things a lot easier for me. Honestly I didn't even know you were still active around here so I didn't even think; so sorry about that. If you'd still like the image I could hand it over to you to tweak? ★ Berry ★ Midnight Monster's Parade! 06:52 Mon Jul 13

Hey, I was just wondering if you still have the file for Birdsong's elder image? User:Winterflurry/Sig 23:12, October 2, 2015 (UTC)

She was originally nominated for the removal of her torn ear, but the nomination got nullified because the cite was wrong. User:Burntclaw/Sig 05:27, October 4, 2015 (UTC)

Hey Iveh! i was just wondering if you wouldn't mind if I nominated Tawnypelt for a tweak/redo? She looks just a tad too purple imho, and I've had a couple other users agree with me User:Winterflurry/Sig 12:52, October 16, 2015 (UTC)

Hey. Poppydawn is up for tweak nomination and you have claim of the queen, warrior and elder alt. Let me know if you want to claim it or not.Stealthf🔥re ❤Warriors Forever!❤ 04:52, November 26, 2015 (UTC)

Hello, I have a question about Echomist

Retrieved from "https://warriors.fandom.com/wiki/User_talk:Ivystripe?oldid=1153164"
Community content is available under CC-BY-SA unless otherwise noted.