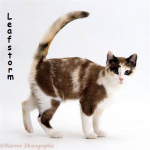 That's not what's said on that page. I double-checked before I undid your edit, and it's never said what kit is which. Here's a picture of my hardbound copy, and it never says Strong Pounce is male. We don't know what gender any of those kits are, if memory serves. —Jayce  ( 16:49, 9/4/2014 )

Fair enough but, on Lapping Waves' page in the Quote it says that Strong Pounce is the kit that says that and in my opinion, the 'He hurled himself at his littermate' is reffering to the kit that just spoke. Sorry, if I sounded rude before! :) --LeafstormOfSkyClan (talk) 17:01, September 4, 2014 (UTC)

Retrieved from "https://warriors.fandom.com/wiki/User_talk:LeafstormOfSkyClan?oldid=914674"
Community content is available under CC-BY-SA unless otherwise noted.