A RPG game where players can play as their own character in the Warriors universe with others.

Create your own Warrior Cat and roleplay in this official game based on "Warriors", The New York Times best-selling series of fantasy books. Warrior Cats: Ultimate Edition brings the "Warriors" series off the written page and into the Roblox world!

🎨 Create your own Warrior Cats, and your own story.
🐾 Choose the path of a Warrior, a Medicine Cat, or perhaps even a Clan Leader!
🗺️ Explore the Forest Territory and the Clans who inhabit it...
💬 Develop friendships, alliances, and identify your foes!

🌟 Construct your own story in this immersive environment, and control your own destiny.

Warrior Cats: Ultimate Edition is an openworld, free-to-play, 3D roleplaying game on Roblox. The game was released on May 7th, 2021, and is published by the Coolabi Group and Aldrich-Callen Studios.[1]

Naomi Dare, the Digital Director at the Coolabi Group, describes the game as:

"We're excited to be launching a Warriors game on Roblox as we know that so many 9-12 year olds are on the platform, with over half of this age group in the USA playing on Roblox at least once a week. This tends to be the age that people start reading Warriors, so not only does it serve our existing fan base who are desperate to role play in a Warriors world, but it should also attract new fans to the brand too."[1]

Alrich-Callen Studios has several plans for future developments, including:

On the main Roblox page and while logged in on their Roblox account, players can choose any public server to join. They can also select any server their friends are in or purchase a private server for 200 Robux. Servers are maxed at 60 players. Selecting a server is not a prerequisite to play the game, as the game will automatically pick an available server when the player joins regularly.[2]

The game features an extensive character customization feature, with players being able to select pre-set colors for the primary pelt, secondary pelt, markings, secondary markings, eyes, skin color, bright accessories, and dull accessories. Players are even able to add individual markings with the paintbrush tool, and change individual sections with the advanced tool on the desktop version. Players are also able to customize the ears, eyes, head, muzzle type, ear accessories, fur length on the tail, legs and torso, and scars and neck accessories. Some accessories are exclusive for purchase on their website or beta testing, such as several collar types, extra scars, and fur lengths.[2] The character models come in four different builds: kit, apprentice, young warrior, full sized warrior, and extra large, though the latter option is only available for beta testers.[2] Players are able to create up to seven different characters. Below is a complete list for the accessories, and several of them can be added on top of each other, though others are mutually exclusive:

After customizing your character, players may choose one of six worlds and allegiances to play in: ThunderClan, RiverClan, ShadowClan, WindClan, rogues and loners, and kittypets. The territories are open-world with locations from the forest territories, such as the Clan camps, the Twolegplace, Fourtrees, the Moonstone, and more. The game also includes a day and night cycle that last approximately twenty minutes and a chat system. Players can pick up one item at a time, such as moss, shells, leaves, toys, and various herbs that spawn naturally in the world. Players that have the apprentice build or higher can also pick up kits and carry them around.

There is also a world border surrounding the map, and randomly generated weather, such as cloudy skies, rain, and thunderstorms. In October 2021, a fall updated map was released showcasing the forest territories in autumn.[2]

With these resources, fans have the locations and information they need to start their Warriors roleplay. Players may create their own roleplay or join in on events hosted on the official Discord server. 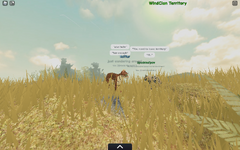 Tailfur being told to go away for trespassing onto WindClan territory

Rain in the overworld

There are ten herb items that players can find spawning in the overworld: borage, chervil, yarrow, dock leaves, poppy seeds, catmint, juniper berries, thyme, moss, and cobwebs. Players can only carry one item at a time in their mouth, and these items can be stored in the medicine cat's den in limited quantities. While the herbs can be found in all the territories, some are only found in certain areas to be book accurate. For example, moss can be found on trees and rocks near sources of water, cobwebs can be found in caves and hidden dens, and catmint tends to be located near Twoleg development. Finding all of the herbs will result in the player earning the Sage badge, which unlocks the star scarf accessory. Herbs can either be eaten or chewed in poultices, the latter can be used to treat wounds. Poultices, such as those crafted from chervil, can be used at least four times.

Poppy in the overworld

Players hold items in their jaws

On mobile, players move the character by pressing forward on the left side of the screen and moving the camera with the right side. How fast the character moves depends on the toggle on the right side: crouch, walk, trot, canter, and sprint. An arrow underneath indicates when the player can jump, though if using canter or sprint, the character will jump automatically. The bottom row contains the menu, from left to right, Clans, poses, editor, character exchange, change information, Starpedia, and options.

On desktop, Q/E is to change the speed, V is to drop held item, M is to toggle the minimap, scrolling on a mouse will zoom in or out, right clicking and dragging will change the camera, and Shift+P is to toggle the overlay. The shortcuts for the poses are: C for loaf sit, R for sit, Y for rest, T for sleep, U for back lay, G for crouch sit, J for side sleep, and K for side rest.

Characters can also carry items found in the overworld, such as sticks, flowers, shells, leaves, moss, cobwebs, and herbs. Players can only carry one item at a time, and a pop-up will indicate to the player to carry or drop an item.

The Clans tab allows players to teleport to the different Clans' camp as well as change allegiances. There is also a map option, though it is very rudimentary.

There are several poses, or animations, your character can morph into, though the player must click on the pose again if they wish to move. These are loaf sit, sit, rest, sleep, back lay, crouch sit, side sleep, side rest, stretch, front lay, and flat sleep. Players can also sheathe and unsheathe their claws with a toggle. However, having unsheathed claws equipped does not result in harming other players.

The editor tab gives an option to return to the character customization editor.

Starpedia is the name of in-game guide, and includes information about the Clan territories, resources of herbs, and lore. The lore includes information about Clan life, names, StarClan, the Dark Forest, the Moonstone, and Fourtrees. It also includes the warrior code, Clan roles, and Clan terminology. The Clan territories section includes a brief overview of the Clans and key locations, including teleoperations to them.

In the settings option, players can toggle for flashing lights, bright nights, showing players' Roblox names, usernames, bios, and den names, and additional animations. There is also a toggle to decide if players can request to pick you up as a kit, and higher quality rain.

ThunderClan's territory includes its camp, the Sandy Hollow, Sunningrocks, Snakerocks, and the Owl Tree. While a tunnel does lead to ThunderClan's camp, it is possible to fall into it.

RiverClan's territory includes its camp, the river, the gorge, the Twoleg bridge, and the Twoleg nest. Players are able to dive into the river in the gorge, swim in it, and run-jump along the edges. There is an entrance to a tunnel on the WindClan side that leads to Outlook Rock in WindClan. Players are also able to glitch jump into the tree in the middle of camp.

Climbing the tree in the middle of RiverClan's camp

ShadowClan's territory include its camp, the Thunderpath, and the Carrionplace. Players are able to glitch jump onto the tree at the edge of camp.

Climbing the tree in ShadowClan's camp

WindClan's territory includes its camp, Outlook Rock, tunnels, and Fourtrees is listed as well. Similar to the books, WindClan's camp does not contain a designated warriors' or apprentices' den, though there is a spare den in case some players wish to sleep in a den. Its territory leads to the Highstones and the Moonstone. A tunnel leads from Outlook Rock to the gorge below, and players are able to glitch jump onto one of the trees at Fourtrees. 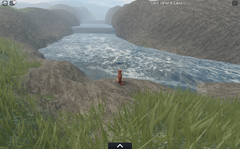 The tunnel entrance near Outlook Rock

The tunnel entrance at the gorge

The waterfall at the gorge

Swimming in the gorge

Run-jumping to escape the gorge

Climbing one of the trees at Fourtrees

Players decide to live as a kittypet reside in the Twolegplace just outside of ThunderClan's territory. There is one Twoleg nest for players to enter and explore, as well as the Treecutplace. Players can interact with cat toys, cat food and water, and toggle light switches inside the Twoleg nest. A tall stone wall surrounds the Twolegplace, and players can perch upon it and gaze into the forest. Catmint can also be found here.

Tailfur with a mouse toy

As a rogue or loner, players can live on Barley's farm or in any of the unclaimed territories outside of the Clans. Players are able to enter the barn and climb the boxes to the top loft. Players are also able to interact with the barn door and the light switches. Catmint can also be found here.

Top of the barn loft

The Highstones is the location of the Moonstone, located at the bottom right coming from WindClan's territory. You cannot climb to the top of Highstones.